Why I love Lightworks 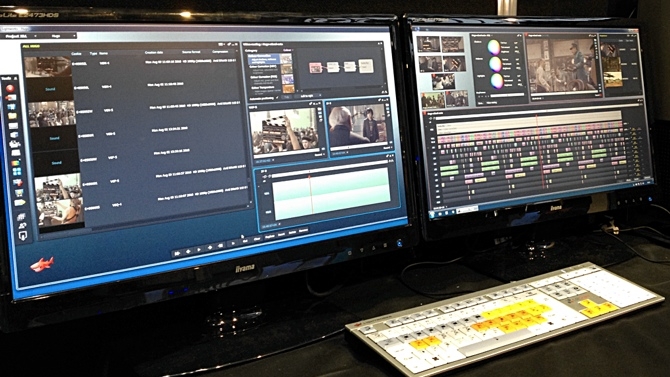 Some people say everything comes to you through the eyes, and with Lightworks, that was definitely true.

Double click the shortcut and, wait for splash-screen, enter the workspace aaaand... nothing! Nothing except the toolbar, the onscreen console, and the project card (now called the import  panel). So clean and minimalist. Oh, and the shark. A shark!  That did it for me.

Even its name, Lightworks, as if it were a reference to "Lumière" (I thought it was a French NLE, since I found it through a French site) was seductive and appealing.

I can’t deny it: it wasn’t easy at first - but that was  because my of previously-learned habits. Yes, I struggled with the Shark, but it was worth every stumble.

I remember a post by Lightworks Forum user JWRL: "I would suggest sitting in front of LW and trying things out. It's  supremely logical software, and it doesn't have heaps of special  effects tools. That's not what it's designed to do. It's designed  as a tool for a competent editor to tell stories with."

JWRL was right; it is extremely logical.

What’s not so logical - and this happens with every other NLE - is for a video editor to have to follow a mouse pointer all the time instead of keeping his or her eyes on the main output monitor.

At first I didn't realize how good Lightworks was because I had become used to “drag and drop” editing, and I wanted Lightworks to be the same.

But eventually I remembered that when I was still editing tapes, I rarely took my eyes away from the program monitor because I had memorized the positions of the  buttons and controls of the VCRs and other machines in the editing room - and I was much more focused on my work.

It’s when you come to trimming on the timeline that you fully realize the difference between Lightworks and other NLEs.

Editing in Lightworks is like putting your hands on a real roll of film or a videotape, even if you don't have a Lightworks Console (like me). Using the keyboard and the mouse, you also can feel the "organic" thing; the  real thing, like using a VCR's shuttle control, the play/pause buttons, and so on.

In other NLEs, your clips on the timeline just look like rectangles that you resize or stretch, almost like in graphic design programs. But in Lightworks, when you are in trimming mode, you can virtually  see the film tape moving, appearing and disappearing at your edit-point while you trim. This is a great innovation by the Lightworks developers and is helped by the "curls" and the millimeter scale that  displays the clip in the timeline - all moving according to our  trimming actions.

"Tools - they're just there"

But apart from the visual aspects of the interface, there is also a very practical difference between LW  and the rest. Just give a close look at  LW's toolbar. What do you see? Real tools: record, print to tape, bins, racks, calculator, etc.
The toolbar of other NLEs I know, apart from the time stretch tool, mostly display different editing tasks: ripple edit,   slide, slip, etc. I don't see those as "tools" but as trimming  operations, and in LW those functions are always at the tip of your mouse's pointer: there’s no need to looking for and selecting these tools - they're just there. It just depends on which part of the clip you click on. And, as usual, you always have a keyboard  shortcut to these "tools" to make your life easier, and your  editing faster and smoother.

One fun thing that I do when cutting an interview is to put an empty cut at the beginning of the  section I want to remove, unjoin the right side of the cut, and then hit Play, until the playhead reaches the point I want to re-engage  the subject's dialog, and finally join the cut. I let Lightworks trim while I sip my coffee! That's what I mean when I say that editing in Lightworks is fun! Of course, I do this only when the  undesired section lasts a few seconds because I don't like wasting time. If it’s too long, I fast forward it!

And that leads me to one of the things that first fascinated me when I started with Non Linear Editing, which was the ability to access any  part of my clips randomly, without having to run the tape forward or backward. I could also switch the order of my clips on-the-fly without having to redo all my work. But that came at a cost: in a way I did lose the tactile relationship with with my footage that I had been used to, working with tape.

But Lightworks has the advantage of combining the best of both worlds.  We can do all the above, but also see exactly what is happening with our editing. We can trim our footage while playing the clips, and this is great, because it makes us rely in our "feel" while we edit, and this is a good thing, creatively.

Another advantage of Lightworks over NLEs that rely on drag-and-drop functionality is the absolute precision of the combined use of Mark-and-Park and the clipboard.

Trying to move a section of your edit to another point in the  timeline by drag-and-drop can result in frame inaccuracy if you are too zoomed-out, even with the "snap to" feature enabled (and if you are too zoomed in, it's a potential recipe for disaster). In LW, just Mark-and-Park the section you want to move, delete it (it goes to the clipboard), place the playhead at the new location and insert the content of the clipboard by pressing a button or hitting a  key.

Lightworks now does have drag-and-drop, and the LW guys implemented it in a smarter way which is absolutely more useful and time saving. They way they’ve done it takes drag-and-drop a step further than with other NLEs because it combines speed with precision.

Finally, keep one thing in mind: LW is an NLE. It’s storytelling tool that will excel to its full potential if there is a story behind your project. I say this because many other NLEs have extra features such as compositing, motion graphics, special effects, etc, which often supplant the true function of an NLE. LW is not a Swiss army knife that tries to do everything, but is the best scissors for cutting your stories.

One more thing: if you want to learn LW, don’t be discouraged if at first it seems difficult.

Stay with it. It will be worth it!