Adobe makes the impossible possible with its Haze Removal Tool 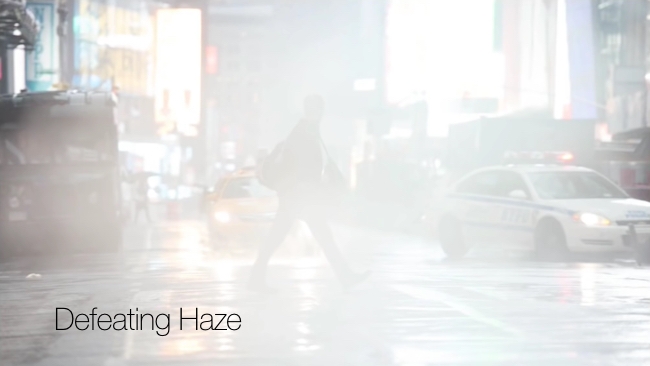 What can you do with a foggy photo? Quite a lot now, it seems!

One of the best things about being a technology writer today is that we're starting to see things happen that we thought were impossible. You can change the pitch of a single string in a guitar recording, fix audio clipping, and now, you can remove the haze from a photograph.

One of the reasons these things have been so hard is that they're almost breaking the laws of physics. A guitar sound - or any sound for that matter - is represented at an instant by a single wave front (a loudspeaker cone can only be in one place at one time) so it's necessary to step out of the waveform paradigm and into the frequency domain where each string has it's own part of the spectrum and can be worked on individually. Sounds complex, and it is. This is not something you could do on on a Sinclair Spectrum in Basic.

Fixing clipped audio involves - essentially - imagining where the audio waveform might have been if it hadn't been leveled off.

And removing haze from a photo? Well, according to Adobe's blog, "The Dehaze technology is based on a physical model of how light is transmitted, and it tries to estimate light that is lost due to absorption and scattering through the atmosphere".

Well, if anyone had said that to me without the actually software to prove that it had been done, I'd have said "good luck with that, then" and confidently expected it never to work, or at least only very badly. But Adobe has done it, and the results are really effective. What's more, if haze is your thing, you can actually introduce more of it by moving the "Haze" slider to the left instead of the right.

Note that this is not just a contrast adjustment: it uses a model of how light behaves in an atmosphere, so the behavior is much more complicated than that.

Gradually, those ludicrous scenes in the spy movies where the boss says "enhance that picture", and, suddenly, a smeary, unrecognizable face turns into a pristine photograph, are becoming less fiction than fact.

Here's a video from Grant Friedman (thanks to Petapixel for finding this!) showing how it works.

Happy days for photographers, and, if you have the patience, you could probably apply this to video as well, by exporting as frames.