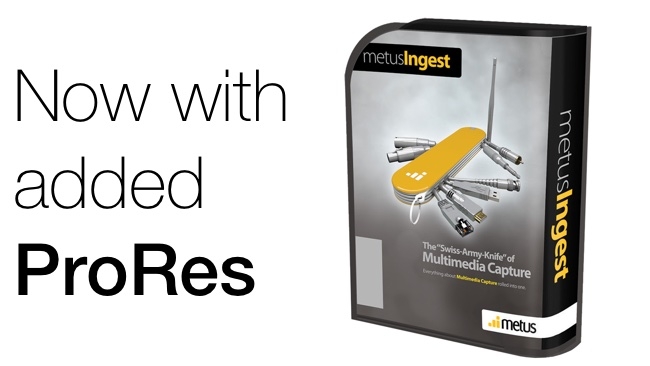 Metus has added support for ProRes 422 to its multi-stream capture and transcoding software, Ingest.

Metus Ingest has been used on a number of high-profile projects to date, including last year’s Eurovision Song Contest and taking a central role in the new Connected TV research facility opening at The Landing in MediaCity UK. The new addition means that Metus Ingest now allows video operators to record up to four channels of full quality Apple ProRes streams, while simultaneously creating proxy files.

The company likes to bill Ingest as the ‘Swiss Army Knife’ of multimedia capture, and it’s certainly added some interesting new tools with this release, with new supported ProRes formats now including ProRes 422, ProRes 422 HQ, ProRes 422 LT, and ProRes 422 Proxy. All of which means users should be able to accelerate Apple-based post workflows nicely using the native 64-bit Windows software; everything from gaining quick access to the files via FCP X, though moving files in and out of archive and even on to iTunes distribution.

The company has also announced integration of its media asset management system, Metus MAM, with Adobe Anywhere, which will allow teams to create an Adobe Anywhere production from assets stored within the MAM via a simple drag and drop from the asset manager.