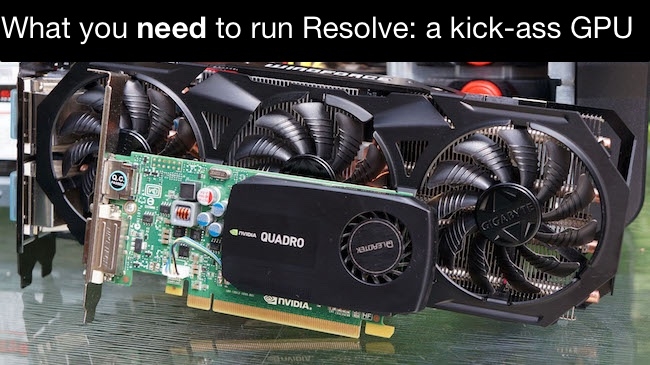 Replay: Technology may have moved on since it was first written, but this still has relevance. Craig Marshall updates his enormously popular article, How to build a system to run Resolve - on a shoestring, by spending a bit of his hard-earned cash on a rather necessary GPU upgrade.

A while ago, RedSharkNews published an account of my Resolve on a Shoestring build, based around an affordable yet versatile z87 ATX motherboard, a 3.6Ghz four Core i7 CPU, 16GB of RAM and an entry level Graphics card (GPU), and loaded up with Lightworks, my favourite NLE and arguably the world's most popular colour grading software: DaVinci Resolve.

Whilst that article remains popular, I received a fair amount of criticism in some circles for suggesting that a cheap entry level device such as the Nvidia Quadro K600 Graphics processor could even be considered as a suitable GPU for Resolve. My point at the time was to unlock some of the mystery in assembling an 'entry level' PC based NLE/Grading system which could be up-rated as funds and/or clients demanded but to be fair, the K600 with its meagre power supply requirements and some 200 CUDA cores does allow the successful installation and operation of Resolve but that's about all. (Resolve looks for a CUDA and/or Open CL card installed in your system before installation proceeds so most if not all ‘on-board’ Intel graphics processors do not cut the mustard.) 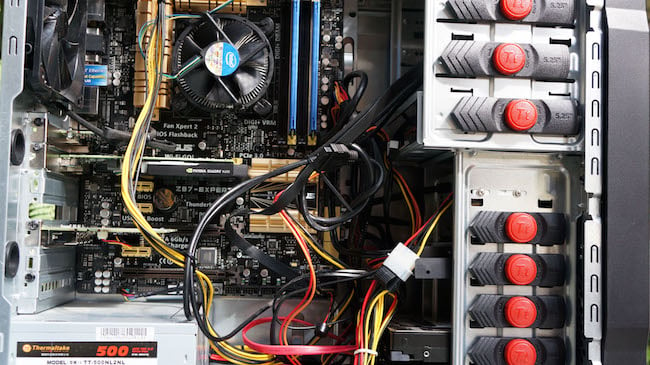 So what are the limitations of installing only a small GPU in Resolve? Well, Resolve consumes CUDA for breakfast! The more CUDA cores the GPU has, the better basically, but if all you require is adjustment of Lift/Gamma/Gain with a good set of scopes to grade your own, nicely shot Rec709 video files, then the K600 or equivalent low powered GTX card will be all you'll need but as soon as you want to add a few ‘nodes’ (or layers) to your grade, small GPUs will bog down and your real time Play capability will slow to a crawl.

Now in order to get a 'reference', I needed to test Resolve's performance under load against some form of benchmark so I searched and found the Resolve 'Standard Candle' test, developed back in the days of Resolve 10 by German colorist, Sascha Haber. This GPU 'stress test' uses a short 'Tracking' HD video test clip running at 24fps from the original Resolve 10 Tutorial and although the clip is no longer included with Resolve 11 install, it is still available from a number of web links. Haber's ‘Standard Candle’ GPU test is designed to endlessly repeat the video clip, weighed down under the stress of multiple 'blur' nodes being applied to it. In a nutshell, the more blur nodes which can be applied to the clip whilst it maintains a smooth 24fps play speed, the more powerful your GPU (and the better your disk transfer speed).

With the criticism of the Quadro K600 detractors ringing in my ears, I kept a keen lookout on the second-hand market for a more powerful GPU replacement, bearing in mind that I still wanted an efficient home studio grading system, not an 'electric heater' which shows pictures. Whilst I still had the Quadro K600 installed, I ran the Standard Candle test and yes, as soon as two or more blur nodes were connected, realtime Play speed plummeted from 24fps to a struggling 9fps.

Around mid-2014, Nvidia started shipping its GTX 9XX series of GPUs featuring the latest Maxwell architecture which is even more power efficient than the previous Kepler generation. It seems the 'gamer' fraternity demands the latest and greatest too so it appears many high performance GPUs are often privately imported, used for one or two competition game sessions on-line, then sold off to finance a further upgrade. Consequently, it seems very good bargains can be had if you're prepared to settle for the 'almost fastest' GPU around so I picked up a Gigabyte GTX 970 G1 with a large, triple fan 'Windforce' cooling system at around half the new price.

Recent reviews of this card promised just over 1600 CUDA cores and 4GB of video RAM (compared with the 200/1GB or so found in the K600) and important to me, a quiet operation. Note: It turns out that the GTX 970 really only offers 3.5 GB of video RAM at full throttle as Nvidia seem to have built in some limitations which thankfully, the more expensive GTX 980 does not suffer. My baby K600 runs totally silent with only one small fan on board so I’ll admit to being well prepared for some extra fan noise after installing such a comparatively massive piece of computer hardware. 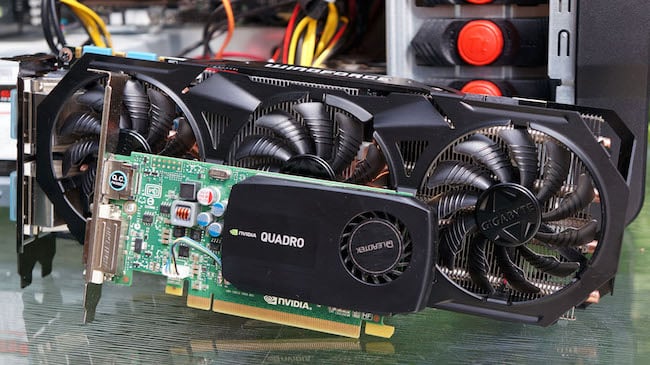 Installation and firing up

The GTX 970 only requires one PCIe 16x lane bus but it demands the width of two cards and as can be seen from the pictures, the long card only just fits inside a standard ATX PC case. It offers four monitor capability with Dual Link DVI-I, 3 x DP and 1 x HDMI 2.0 outputs but of course, the latter is of little interest to most Resolve operators as many will be bypassing their computer’s internal graphics with a dedicated Decklink or similar card outputting 10b-t colour via either HDMI, or better still, SDI.

Notwithstanding the modest PSU requirements of Nvidia's Maxwell architecture, the GTX 970 does need additional multi-core power cables attached directly to the top of the card as the current required cannot be safely passed by the tracks on the bus lanes so this demanded that I upgrade my PSU from the 500 watt box which had shipped with my tower case to a beefier 750 watt unit. Installation of the latter was quite straight forward but I took the opportunity to re-wire the PC chassis and motherboard so that the cable runs traced around the edges of the board, rather than the classic and rather unprofessional looking 'bird's nest' setup.

The new PSU and GPU ready to go

After installing the new PSU and GPU and carefully checking that all wiring harnesses were in their correct place, I powered up. You’d have been forgiven for thinking that a tornado was approaching! Wow, the sound of those three 100mm fans on the GTX 970 chassis certainly made an impression. I must admit, I was a bit disappointed with the extra noise but once I downloaded and installed the Nvidia 970 drivers and re-booted the Win 7 OS, I was relieved to hear the fans slowly spin down to a quiet idle, just as silent as before. Whew! My home studio PC now has three main disk drives installed: 1 x 128GB SSD System drive, 2 x 256GB SSDs ‘Striped’ under Win 7 management (RAID 0) and 2 x 3TB WD ‘Enterprise’ 7200RPM drives also ‘Striped’ for maximum speed so now it was time to run the Resolve Standard Candle test on the GTX 970.

I chose the two Raid SSDs to run the test as they operate as my main ‘edit pair’. The HD test clip maintained a steady 24fps right up to 11 blur nodes and then slowly dropped to a clunky 9fps with 30 nodes applied. My result for only modest outlay was a massive increase in GPU ‘horsepower’ - more than enough performance for my immediate and foreseeable Resolve use but of course, if you were working with 4K RAW images at say, 48fps or faster, this single GPU setup would be far from adequate. 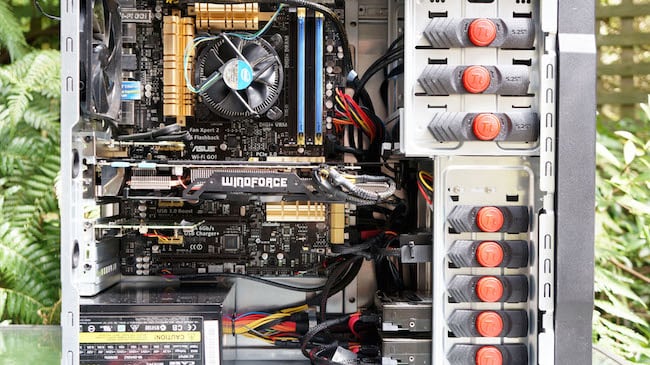 Titan X 12GB as a second card (ie compute only, no GUI)