Making sounds in the editing room 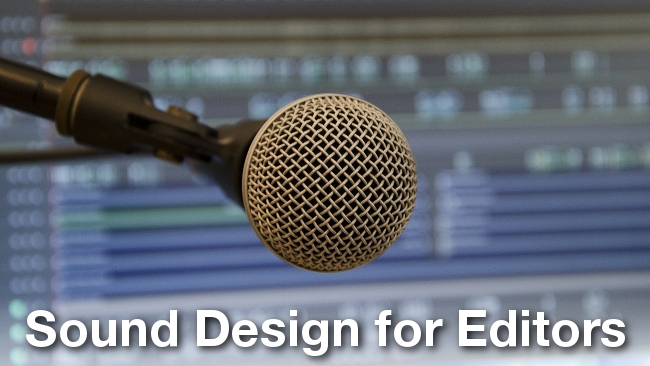 RedShark Replay: Guest Author Vladomir Boboshin details exactly what you can do when your role shifts from editor to emergency sound designer.

An agency producer: "So, the story goes like this: this arrogant bastard challenges a girl to a tennis match and he loses like a teenager to a champion. There is a lot of 'playing' going on, you know, grunts and panting, shoe skids, ball hits, real intense stuff. We have production sound, but it's not slated, so it couldn't be synced to picture, and there is no sound for slo-mo shots. The cut's due in 2 days. Would it be a problem?"

Of course, not. You should have seen my face at this moment.

What does the editor do, when he is required to make some kind of sound design for the cut in progress and doesn't have the production sound, or this very sound leaves you wishing for better options? The first thing that comes to mind is SFX library and there's nothing wrong with that. But, like in the aforementioned case, I didn't feel I could cover 45 seconds of the intense tennis match using 3-4 ball hits and shoe skids. It required more variety. Fortunately, the production audio existed and I took my time to listen to the long files of the game, picking out the sounds I would use later to build my own edited match. But this story isn't about my struggles, it's about the ways you can use the available resources to create your own soundscapes and take your film to another level.

Record your own sounds

Nothing beats the real sound of the thing in the frame or real conversation recorded on the spot, but as we all have experienced, it's not always the case when we edit. The existing technology offers an excess of solutions to record anything anywhere with great quality. It is kind of sad that most editing suites only keep a dynamic mic to record voice-overs, but we all got iPhones and iPads, right? Its microphone is good enough to record fairly loud noises like household items, doors, drops, scratching, glassware, you name it. There are a few dedicated microphones for i-devices that are designed for journalists, but may as well be used for recording more sophisticated sounds: room tones, atmosphere and other delicate noises. Check out Zoom iQ6 and iRig Mic and the like. I personally find it much more fun to determine what the picture requires and figure out how I can get those sounds, instead of spending time sifting through an SFX library.

There is one website I absolutely worship: freesound.org. It looks like a lot of people on our planet record a lot of things all the time, and these recordings get to this website. I found all kinds of sounds there that I couldn't create on the spot. I mean, if you want exotic sports car revving, ship horn, guitar feedback or a tiny music box, you most likely will find them there. I once found the sound of a balloon being squeezed – the most unpleasant sound ever, but it was there. Or pulling on the rubber band. I guess if you look up "styrofoam squeaks," you'll find plenty. There are certain limitations for commercial use of the sounds, as they are all under Creative Commons License, but for non-commercial films or your own projects, it's like heaven. I put my own guitar sounds out there and get good vibrations going when once in a while I get a response from a person sitting on the other side of the earth using my noises for his project.

What you see and hear in the frame is not necessarily the thing, but you believe it is. Some things you see in your footage you just can't record or find sound for. That's when creativity gets a chance to show its worth. Say, you have a vacuum cleaner to make the sound for. I'd go to the bathroom and close-mic the fan or find an air conditioner and record its fan and then change the pitch (more on pitch later). Well, even playing Flash video on my laptop gets its fan going mad and it can be recorded on the built-in mic.

You need a church bell. Find a metal pan lid, hit it with a chopstick or a spoon, record and pitch down. One of my challenges once was to recreate a sound of the old turning tables at a 1960s airport, these flipping things with a distinct sound. I wound up going to an accountant's office and recording their currency counter, which I then pitched down and it sounded just right. Next time you get stuck finding one specific sound, think what in your near surrounding can produce something similar that you'll be able to transform.

One swoosh gives a nice touch to the sound, but three swooshes copied and pasted bring out memories of the 70's kung-fu movies. Unless you deliberately want it, overusing one or two sounds doesn't appear pleasant and professional. I admit that swooshes and swishes are not the best example, as one can find tons of them on the internet in a heartbeat, but it's not the point. Even if you have a limited number of sounds, you're still able to build a complex and layered soundscape by using basic plug-ins built in every NLE software package. First off, EQ and filters are your best friends. Using only low-pass filter, you can make the same sound seem closer or farther, clear or muffled, depending on what you're after. Filters and EQ allow perspective manipulation like nothing else. Even if there's a music bed, I sometimes use a parametric EQ to make space for voice-over, instead of lowering the overall level or using compressor's sidechain. Or I'd cut the whole top end of music to make space for street sound "hiss." Combine filters with pitch shift and you'll get the whole palette of tools for tweaking sound.

In essence, pitch shift can make you sound like an alien creature, if you lower your voice by a few semitones, or like a chipmunk, if you dial it a couple of semitones up. The numbers may vary, but the concept stays unchanged. Say you want to accentuate a punch in a boxing match and it happens in slow motion or slows down right after the hit on screen. The hit, played back in normal speed, would sound inappropriate for such dramatic moment, as it has to be bigger and deeper to communicate the bone-shaking blow and suggest the consequences. If you pitch the sound down, it will become deeper and lower, but at the same time it will loose some of the "punch," the transient "edge" that makes it "feel" strong and painful. The easiest way around this problem is to layer the normal punchy sound and pitch down to a huge and low sound, retaining the punch and the hugeness at the same time. Another way is to crossfade the attack of a normal speed sound and pitch down its tail. There is no one right way to do things like that. I'd just go for what sounds good. Back to our swooshes, using the combination of filters and pitch shifting you can produce a whole range of "swooshy" noises from just one sample.

One day, you may face the need to recreate a specific sound source, like a telephone,a public address system in a mall, an announcer at a train station or crackling walkie-talkie commands. It's difficult to transform clean recorded voices into those sound sources and make them sound genuine and believable. Most of sound source effects can be recreated by combining basic effects like distortion, EQ, reverb and pitch. However, in the real working conditions, the editor hardly has time to submerge into the elaborate process of effect chains.

Here’s a great piece of software: Audioease's "Speakerphone 2". It is, in fact, a chest of treasures with almost every sound source that exists in urban environments and interface to adjust individual parameters. Having this thing handy saves a lot of time, if you do sound design or editing for a picture.

There is one big thing which was left out from this brief overview and which is always with you. Your own voice. Human beings are capable of mimicking a whole lot of noises and, if you add some low-tech analog processing to your voice, like a cardboard funnel, metal pot or tin can, you'll be well-equipped to produce some unearthly sounds. Just try it and rediscover the fun of playing with your voice. You may be surprised at what comes out.