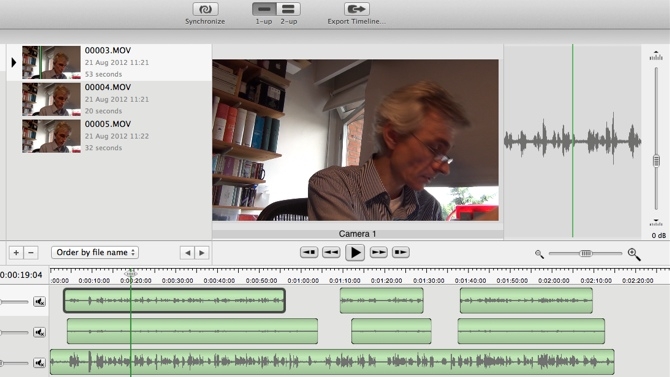 Recording audio separately from video is prone to synchronisation problems. Traditionalists use (electronic) clappers and the Timecode from the camcorder. Enter the new way to synchronise: Plural Eyes from RedGiant's Singular Software

More than one camera and perhaps multiple audio recorders as well, with none starting and stopping simultaneously: a common scenario for moviemakers, music video shooters and documentary producers working on a small team. NLEs have synchronisation features, but they're basic at best.

PluralEyes 3 synchronises takes even if the devices have been start/stopped repeatedly at irregular intervals. The interface lets you preview video clips and pre-listen to audio clips, set options, synchronise and export the results to XML or a media file. (EDL is not supported.)

The interface is user-friendly, with bins in the left columns, a central preview window and a waveform/timeline at the bottom. The program has audio level sliders, but none of them show the current dB level and there isn't a Normalize button to set all audio to maximise sound levels.

I first did a quick-and-dirty test with a camera and a studio microphone hooked up to an Apogee Duet. After clicking the Synchronise button I could export the result to a media file without further tuning. A synchronised media file may have to be cut in the editor afterwards, as gaps between shots or sound takes will appear. The media file is your only export option if you don't have Final Cut Pro 7 or X, or Premiere Pro.

If you do have one of these, PluralEyes 3 can import their XML and process the clips on the timeline/sequence. I tested this using two audio recorders, three microphones and two cameras. One microphone was continuously recording while the cameras and the others were stopped and restarted at irregular intervals with gaps in-between.

I hit the Synchronise button and my 2 minute project was perfectly synchronised in under a second. PluralEyes 3 relocated the clips along the timeline/sequence. I could now cut in the editor and close all gaps between clips, and my project was ready. If I wanted to, I could also have created a Multicam clip.