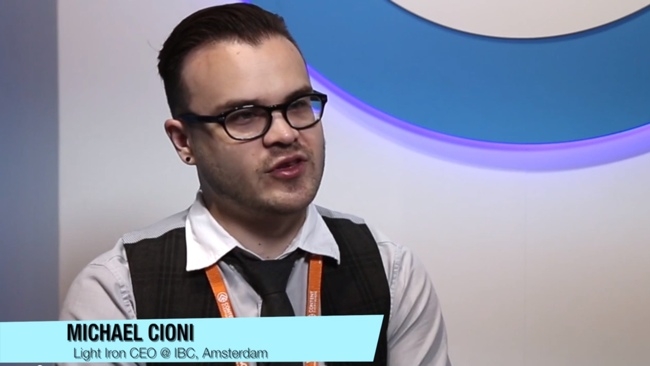 Here's our interview with Michael Cioni of Light Iron, talking about how he manages media data within his facility. Co-incidentally, the day we're running this interview, Panavision has announced that they've acquired Light Iron! With congratulations to all concerned, here's the interview

Well, this is topical!

We were just about to show you this clip of an interview we had in Amsterdam in September with Michael Cioni, CEO of the Hollywood and NYC Post Production company Light Iron, when, today, we heard that Light Iron has just been acquired by none other than Panavision. More of this in a minute.

We've been working alongside G-Technology to make a short series of interviews that talk about acquisition, production and backup strategies with leading figures in the industry.

Michael gives a fascinating account of Light Iron's strategy with content and storage - one that's obviously been thoroughly road tested. There's real wisdom in this interview.

Light Iron is clearly doing something right to have been snapped up by Panavision.

Under the new owners, Light Iron will continue as before, but with the additional resources brought to the table by Panavision.

Talking about the acquisition, Michael said

"Panavision is a ideal partner to extend Light Iron's international reach. A long standing commitment to quality and client service has made Panavision one of the most trusted brands in the world. The fusion of our two companies, and the creation of the new optimised tools, will mark the beginning of a new era in digital acquisition and delivery on a global scale".

Here's our interview with Michael Cioni of Light Iron, brought to you in conjunction with G-Technology, before the Panavision news was made public.