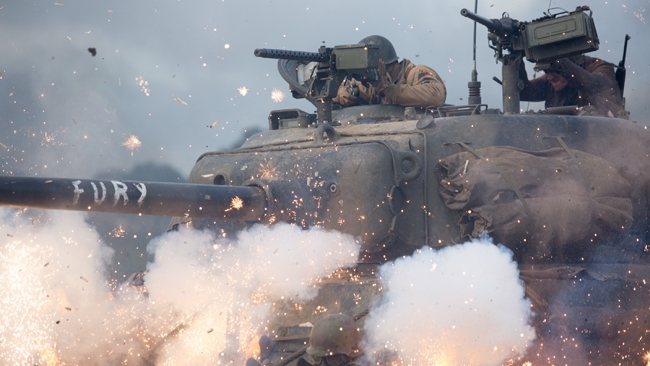 Phil Rhodes talks to noted film editor, Dody Dorn, about her latest work on David Ayer’s Fury and the complications of editing at four different sites.

Dody Dorn is an editor of truly impressive experience, with credits on Memento, Kingdom of Heaven, and Insomnia. Currently on release is Fury, David Ayer's film about tank combat at the end of World War II. Having previously collaborated on both Sabotage and End of Watch, Dorn and Ayer worked closely, with the editor moving from Los Angeles (where the film would be finished) to be nearer set.

The editorial department included several other people working under Dorn — additional editor Rob Bonz, and assistants Robert Benedict, Yon Van Kline and Emma McCleave, who were taken on after the move to the UK.

“Things were being passed back and forth between us, the two editors, and being refined,” says Dorn of the international arrangements. “I was at base camp doing three different things. I was cutting scenes on Media Composer, I was preparing set references and I was cutting tap footage so the director could get an idea what he had.” Though the technique of cutting video-tap footage was one that had been deployed on Australia, Dorn did so “under duress. But that was part of why they wanted me to come.”

Ultimately, 16 Avid Media Composer systems split across four global locations would be used during the production, including a portable outfit that could be taken to wherever the director happened to be, particularly on weekend downtime. Ingesting the video tap footage required Avid's AMA (Avid Media Access) tool. Colour correction for screenings, as well as rough visual effects shots, including muzzle flashes and continuity fixes, could also be done as part of the edit process. Audio, too, could be prepared, with dialogue balancing and effects and music added.

Eventually, the makeshift UK editing room became “the de-facto screening room. Any time a crewmember wanted to see anything, they came to us. It was funny, because while I was on location I started keeping a calendar, thinking, I'm not getting very much editing done – but of course I was. Features in Media Composer like match back and reverse match back saved us time and gave us the option to go back to any point in the edit and take a fresh look at things.”

Technically, the international collaboration was complicated by the director's desire to work with particular colourists, Yvan Lucas and Tom Rieser, resident at EFilm in Los Angeles. As a result, once the 35mm rushes were processed at Deluxe in London, they were scanned on a Spirit, sent to EFilm in Los Angeles where the scans were colour corrected, transcoded to Avid's DNxHD codec, and synchronised with the live audio. That media in turn was sent to the Los Angeles assistant editors who organised and sorted the material into bins which would be emailed back to the UK edit room.

Over a three-and-a-half-month period of principal photography, there were 69 shooting days, and on the first day the production shot over 40,000 feet of film. “We had a complex dailies path,” notes Dorn. “We couldn't get them fast enough. It took five days to get that first day.” Soon, though, the dailies process smoothed out, and “with the 8-hour time difference, we had a 24-hour editing room running completely across the four ‘global’ systems. We used locators and titles within Media Composer for the departments involved to track various tasks throughout the process, giving us a fluid informational flow across the board.”

A ‘real ale’ sort of film

Structurally, audiences might reasonably perceive that Fury is somewhat unconventional, at least from a pacing point of view. Nonetheless, “we talked about it in a three-act structure,” says Dorn. “But even right now, if you asked me where the third act is... it's [probably] just before the mine hit. I had lots of discussion with David about the movie, and then all the way through – like a lot of films, you discover it during the process.” As well as its pacing, the film has been warmly reviewed for the naturalistic and believable performances of its principal cast. “There was a lot of improv within the confines of the structure of the script,” says Dorn. “That's something that David really likes to do, he's reaching for these naturalistic performances.”

In other ways, too, Fury is something of a real-ale film, a traditionalist's picture produced using traditional techniques. Shot between October 2013 and January this year on anamorphic 35mm, mainly with Panavision G-series lenses, it's an example of Ayer's keen interest in shooting practically. The world's only working Tiger tank, belonging to the Bovington tank museum, appears in a battle scene, and there is an almost complete lack of digital effects. “David made this effort and succeeded in shooting as much practically as he could,” adds Dorn. “As a result I think it allows you to connect with the characters emotionally on a deeper level — that aspect is just refreshing.”

Finishing Fury was a process complicated by the moving-up of the release date by a month, leading to the involvement of editor Jay Cassidy, additional editor Geoffrey O'Brien, and assistant editors Naomi Filoramo and Mike Azevedo, which lead to a lot more emailing-around of Avid bins.

“We were still cutting a week before we finished the [sound] mix,” remembers Dorn. “I recut the dinner scene in the last week, and in the last two weeks we changed part of the narrative at the end of the Tiger battle — originally Norman shot the entire Tiger crew. There were tonal shifts in the relationship between Wardaddy and Norman that were growing throughout.”

With this group of four editors, Dorn notes that “it [wasn't] a typical scenario where there's one editor on one scene. We like to think of ourselves as having worked integrally in the same way the Fury tank crew did. Everybody contributed in a way that was meaningful.”