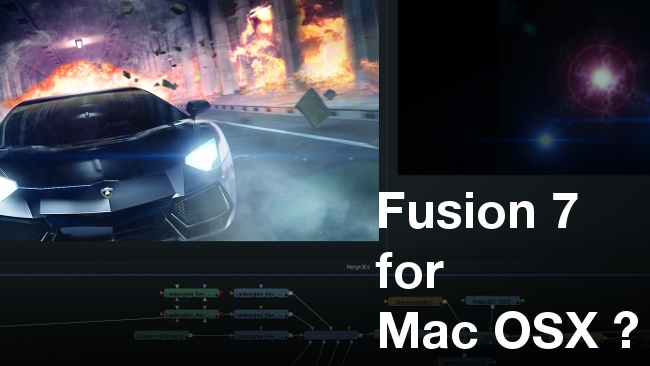 Many Mac users are wondering if and when they'll see Blackmagic Fusion 7 arrive on their platform. In a recent forum post, Blackmagic CEO Grant Petty answered some of their questions.

At IBC2014, Blackmagic Design shocked the post and VFX communities with news of its acquisition of Eyeon Software and, in particular, the powerful node-based compositor Fusion. In the words of RedShark News Editor-in-Chief David Shapton, "Blackmagic's Free Fusion Changes everything." Paralleling its pricing structure for its color grading application Davinci Resolve, Blackmagic made a nearly-complete version of Fusion available as a free download (that caps output resolution to UHD), while offering the full application, complete with stereoscopic 3D and optical flow tool sets, as well as network rendering and OpenFX support, for $995.

This is great news...for Windows users. But what about the post and VFX professionals that ply their trade on a Mac? Blackmagic was flooded with questions of a Mac-version of Fusion, so much so that company CEO Grant Petty saw fit to address those questions via the Blackmagic forum.

According to Petty, the Blackmagic is indeed working on a Mac OSX version for all you Apple fans out there. It seems the sticking point, thus far, has been some "Windows specific code in the buttons and menus in Fusion," which are in the process of being re-coded for OSX. In fact, Blackmagic has "doubled the size of the [Fusion] engineering team," which should speed up the process. But Petty was quick to point out that, even with more coders, its impossible to predict when Fusion for OSX will be available to demo, let alone for general download.

For those cross-platform users, Fusion 7 Studio (the $995 full application) will allow dongle swapping between the Windows and the forthcoming Mac OSX versions, much like Davinci Resolve.

Check out a reprint of Blackmagic Design CEO Grant Petty's forum post about Fusion for Mac OSX on Page Two!

Some people have asked about Fusion for Mac OS X and so I wanted to make some comments about it.

Normally we don’t talk about products we have not announced yet, however the question of Fusion for Mac OS X is kind of an obvious question so it's something we should answer.

Yes, we are working on a version of Fusion for Mac OS X, but there are some important things to know about that.

We are lucky that the engineering team who has been working on Fusion 7 has kept the codebase very modern and clean so that allows us to move it forward. However there is some Windows specific code in the buttons and menus in Fusion, and that code is being changed out right now. What that means is the time it's going to take to do a Mac OS X version of Fusion is a bit unknown, and so it's impossible right now to specify any kind of release day. It's impossible to even know when we can show a Mac OS X version too.

However it's early days. We have only been working with Fusion as a Blackmagic Design product for a few weeks and so we will know more soon hopefully.

We have already doubled the size of the engineering team and so this means we should be able to move faster, depending on how the team grows and works together. The trick is to work on a Mac OS X version of Fusion, as well as doing all the other things we want to do, such as new features. A bigger team will help that. There is a lot more we want to do than just the Mac OS X version, even though that's important!

One thing I can say though, is that our plan is to allow anyone who purchases the Windows version of Fusion 7 Studio to use their dongle on the Mac and to be able to download that Mac OS X version of Fusion free of charge. That's what we do with DaVinci Resolve and it's very flexible and I think helps people a lot. So we want to do that with Fusion also, even though they are very different types of software.

I hope this helps people somewhat. I am sorry I cannot be more specific with timeframes, but it's early days and so this is about the limit of the information I have. But we are all working hard so I hope we have some news soon.

I use a Mac so I want to use Fusion without needing the VMware emulator I need to use now!