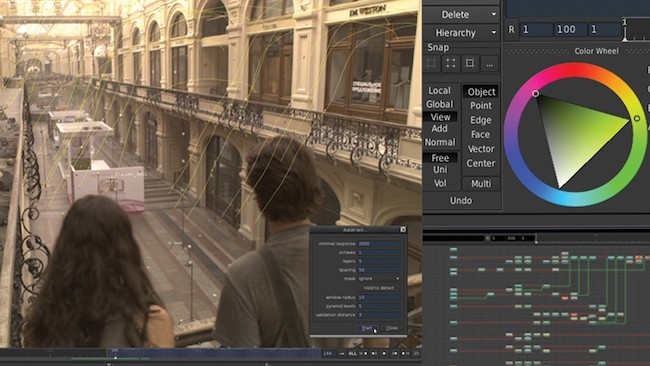 30 years in the making: The BUF UI

A French Revolution:The name BUF Compagnie is not always the first company to leap to mind when one thinks of the world’s top VFX houses, but you’ve been living under a rock if you haven’t been dazzled regularly by the company’s work. And soon, reports guest author Neal Romanek you will be able to buy the software that produced it.

The Paris-based company has been designing visual effects for commercials, films and music videos for 30 years. BUF’s debuts in the feature film world were auspicious, with the creation of digital effects for Caro & Jeunet’s The City Of Lost Children and Wong Kar Wai’s Ashes of Time. More recent effects work includes Game Of Thrones, Life of Pi, the Wachowskis’ Jupiter Ascending and a return to collaboration with Wong Kar Wai with The Grandmaster.

The company is also famous for the “bullet time” effect seen in The Matrix, originally developed for Michel Gondry’s videos and also for its “camera mapping” technique employed to great effect in David Fincher’s Fight Club.

The troubles with the French economy have forced many media companies to change their business strategies, however, and BUF’s deliberate retrenching aims to give it a foothold at a time when local VFX industries are being especially hard hit.

BUF has benefited from being something of a closed shop. The workflow and software it has employed throughout its illustrious history was developed and designed entirely in-house. But BUF has undergone a renaissance over the past few years. Company founder and long-time owner Pierre Buffin opened a new branch of the company, Angel & Fine Productions, devoted to developing and producing the company’s own effects-driven projects. Of even greater significance to the VFX community, the proprietary software that Buffin and his team have developed over many years is going to be released to be released on the open market.

Olivier Gilbert has been with the company since the beginning is VFX supervisor at BUF. “In fact we were a big company five years ago. We were really a lot of people. But it was really complex to mange. And Pierre wanted to focus on more artistic things. Of course if the project is interesting, we would be happy to look at it.”

While BUF is being especially choosy about who it works with and what projects it takes on, it is being equally generous about sharing its software assets – previously under lock & key – with the wide world.

“In addition to the visual effects and the 3D animation and all these fantastic images we can provide, we want to develop and distribute our software,” says Gilbert, “We have been developing the software for 30 years now. We have never bought any commercial software, we have always developed everything on our own, in-house. And now we think that we have this fantastic asset and we want to distribute it on the market.

“We think our software collection is valuable for two reasons: first, we have a proven track record, and second we have a consistent collection of software. Most products only offer special solutions for a studio. So they spend a lot of time and money to patch the different software together to make them work as a whole. It’s a pain in the ass. They don’t manage to make it really efficient and seamless. Ours is a complete package, a complete pipeline. And the artists really like it.”

BUF’s software tools have developed organically with its VFX pipeline, a workflow which has been tested on everything from French bathroom cleaner commercials to Life Of Pi. Many other visual effects tools – though they may have been developed with extensive user input and feedback – still suffer from being created by software designers, not visual effects artists. One trait of a good software engineer is being able to effectively interpret and incorporate user requirements, but Pierre Buffin’s suite of software and workflows will have the advantage of being designed by VFX artists for VFX artists.

The methodology within the BUF studio differs from many other workflows in that there are no specialists – no separation into effects modelers, animators, background artists, compositors, etc. When a BUF artist is given a shot to work on, the artist works on the entire shot, from concept to final. All elements of the BUF software suite are therefore designed to be integrated and used by a single artist.

It seems as if the BUF software will be split into components, each reflecting one arena of the VFX workflow. There will be an asset management piece, a particle effects piece, which will be able to be accessed singly or in a bundle.

“We see that the VFX work is now going worldwide – India, China, all these countries have started to be bigger and bigger in the VFX market – and we think that the heavy price of the software is a barrier for these emerging countries to adopt these tools. One of our selling points is that we can be significantly less expensive than other products on the market, because we have already developed it ourselves. Not free, but less expensive.”

The BUF software release will, of course, require more of the company than just an e-commerce page with some download options.

“The R&D for developing software in-house is not the same as developing it for a large market,” says Gilbert, “So we will have to transform our R&D department to be able to support external users and to be able to make high-level quality software. We need time, but that’s the plan. We have started at the beginning.

Not being a vendor, BUF hasn’t usually been an attendee of the big media industry trade shows. But the company will make an appearance at this year’s SIGGRAPH Asia in December to plug the new software range.

“We are one of the last companies in the world, I think, to have had our own software since the beginning,” says BUF’s CTO, Julien Villemeur, “Now we want to open the doors. We are more in the vein of Linux rather than Microsoft. We are the challenger, and we are open and we are free. We will say ‘Here is the software. You can stay on the surface with it or go deeper and develop your own things.’ So I think it will be…well, I won’t say revolutionary, but I think it’s something that will be really special.”