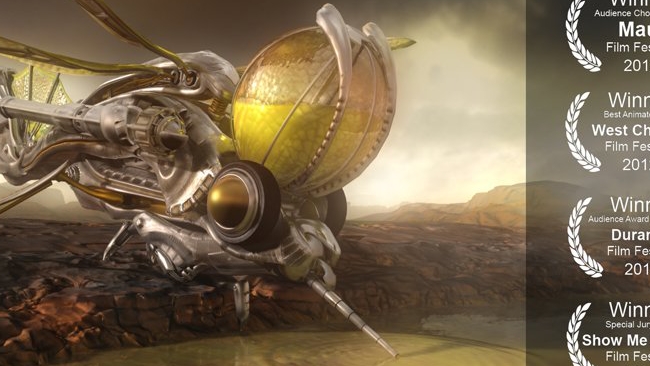 The sci-fi short Abiogenesis tells a simple yet moving story in impressive visuals inspired by NASA's Mars Rover, made by one of its former animators.

When Richard Mans first began working on the main character of Abiogenesis, his award-winning sci-fi animation short in 1998, he didn't know that it would take 14 years to realize his vision. But in that time, he had one animation gig, in particular, that influenced the short's development.

In Mans' own words:

...while I was working on an animation contract for NASA, I was inspired by animations for their Mars Rover missions. I thought it would be fun and original to make my own robot into something like NASA's Mars Rover probe, but let my imagination run wild as to what the robot would do once it lands on the planet.

He committed to working full-time on Abiogenesis in 2007 and did the brunt of the work in Lightwave (3D modeling and animation program). After Effects was crucial for color and compositing. Mans enlisted a sound team headed by Dave Whitehead (District 9, King Kong) to ensure the edit, score, and mix delivered sound to match the epic visuals. Finally, Weta Digital did the transfer to 35mm film. But, it was that spark of inspiration, while Mans worked with NASA, that gave the film its setting and opening - fitting, since Abiogenesis is about new beginnings.