Five things to remember when animating 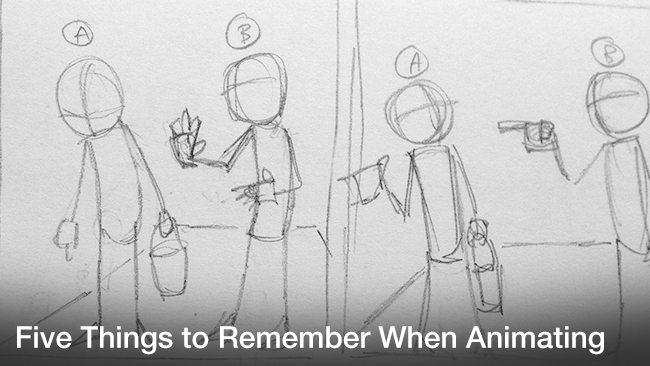 It's easy to get excited about a shot, jump right into it and start working away with the character. That's a fantastic way to waste time and energy on work that you ultimately have to spend even more time fixing – and in worst case scenarios, trashing the entire shot and starting again (always a heart-sinking moment).

Before you do that, take a breath, and have a read of these five things to remember when you're working on a shot.

1. Planning. I know there are some animators who do not plan and can hold a thirty second shot in their head for weeks on end, creating great poses and amazing imagery without ever losing their way. These people are crazy wizards and are to be treated with awe (I'm not sure they aren't using magic or something).

The rest of us plan.

The easiest way I found when I started was to sit down with pencil and paper – although recently I've been incorporating Sketchbook Pro into my workflow for quick digital sketching – and thumbnail out my ideas for the shot. The benefit of drawing at this point is that it's fast. It allows you to quickly throw idea after idea onto the paper, pull out the best ones, and then iterate on those ideas; the more you iterate, the stronger your final output will be. You don't have to be great at drawing. Chicken scratch stick figures will get the job done when the thumbnails are just for you.

2. Reference and observation. As an animator, you're in observe-mode pretty much all the time – paying attention to the world around you, looking at the way people walk, talk to friends, drink their coffee. Everyday life has a huge amount of interesting detail that you can draw on and feed back into your work.

But we also have this thing called YouTube. When you're getting into a shot, a hunt around on Youtube can be a great place to get started accumulating reference. 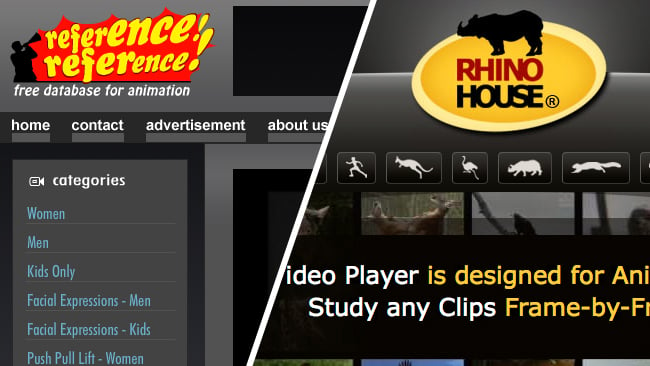 There are also websites like ReferenceReference and RhinoHouse that have video libraries that are shot specifically with animators in mind. Two things to remember when using reference. First, it doesn't have to be specifically what you're animating. It doesn't even need to be the same species as the character. Need to do a big tough hulking character? Take a look at the way gorillas move. See if you can adapt some of the ways they move to your character. Second, don't get too attached to the reference. It's only there to help you with the physicality of a shot. It's just a guide. Depart from it at your leisure.

3. Think in images. When you've got your head down on a shot, fighting with a rig and tangled up in splines, it's easy to forget what the real purpose of the shot is. Your goal is to make good images and tell a good story, and you should be using every tool at your disposal. It's just pixels. The only important thing is that the performance works, that it's believable for the character and the world.

So break joints in the rig if it's going to give a better pose. Cheat things to camera all the time. Always have your shot camera up and refer back to it constantly, especially when you're getting into splining out your controls when you work in 3D. It's so easy to get caught up in the graph and making nice lines, without referring back to the actual image you are creating.

4. Remember the principles. Whenever I'm working, I always come back to the twelve principles of animation (if you're not an animator and you don't know what these are, the short version is that they are techniques and guiding ideas that were put together over many years by the principle animators at Disney, the people who brought you Bambi and so on, codified into the animator's bible, The Illusion of Life). They give you a solid baseline of tools and techniques that you can use on every single shot.

Remember to build in your overlapping actions into your poses. Make sure you've built in your anticipations before each move. Remember to keep your staging clear and think of your audience seeing the shot for the first time. Cast a very critical eye over your timing and spacing, which are really the most fundamental parts of great animation. The best advice I've heard is to try and think of the rhythm of your timing the way you would think of a piece of music – you need variations. You need contrasts in there, fast and slow, rather than all the same beat.

5. Animation is an incredibly collaborative medium to work in, and the best way to get better is to share things with other animators. Share your ideas. Share your work. Peer feedback is such an important part of the process. Even just putting your work up for critique can help you see the rough edges as you look at it from a fresh perspective, before anyone else even comments on it! But here's a critical point: always focus on what you can do for other people, not what they can do for you. Doing someone a favour, looking at their work, or critiquing something costs you nothing but a little bit of time. People will remember you helped them. That will pay you back more in the future than demanding that people look at your work.

We're fortunate now that there are websites springing up that provide a forum for people to give and receive feedback on their work, talk through problems with other animators and creatives, and ultimately everyone gets better. For motion graphics work, have a look at rndr.co, a new site dedicated to motion graphics and animation that allows you to upload short clips of work and get feedback on them. I'd also recommend checking out sites like Reddit, which have strong animation and motion graphics communities.