Alien: a new game trailer shows some state of the art CGI 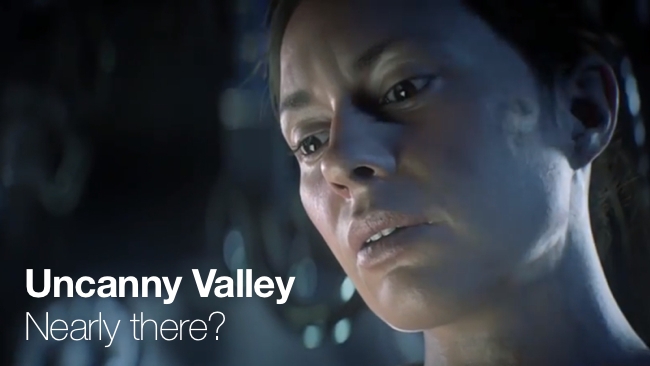 This trailer is a really brilliant piece of CGI, not least because it's genuinely tense and scary

Made by Creative Assembly, it's a cinematic (in other words - it's not actual gameplay) trailer to advertise their game, Alien Isolation.

Most likely the result of digital scanning and motion capture, there's some clever stuff in here. For example, when Amanda Ripley reaches round behind a metal support to release some sort of surge of gas or steam, it looks very anatomically convincing.

But elsewhere the results vary. And I think I may know why.

The limits of motion capture

With Motion Capture, the position of the "actor" is recorded and fed to a rendering program that maps the actors movements onto a model, skinning it to make it look like the character in the film.

So much has to be right for this to look convincing. And most of it is in this trailer (in fact, you almost feel that they've avoided photrealism in order to keep it looking like a game!). But there are some very specific challenges that maybe push things a bit to far, or at least, which could have been improved.  (I don't want to sound snarky here - this is a remarkable work of animation!)

The problem is that Ripley has to make her way through some very small spaces, and in order to do that, she has to crouch down, folding her body to make it smaller.

These are not "normal" positions like standing, walking or running. They make the body bend in ways that perhaps haven't been fully anatomically modeled.

And because of this, these segments of the trailer don't look fully convincing. They display what I call "Sticks with Joints" syndrome, which is the assumption that knees and hips are simple hinges.

As anyone who's ever had knee surgery will know, the knee is a complex joint. It isn't just a hinge. It actually twists and flexes in several directions at once. Given this, it's amazing that it isn't even more susceptible to injuries.

In fact, just about every joint in the body is flexible. It's very hard to model accurately.

If you look closely, it is exactly these aspects that don't look natural.

(Of course I could be completely wrong here and perhaps they did use anatomically correct models for this, but if they did, they're not convincing enough!).

As far as the Uncanny Valley is concerned (the chasm of believability that opens up when CGI animations get nearly, but not quite, good enough),  this trailer does pretty well facially. What throws it out is the arms and legs looking like they're made out of wood and parts that you could have bought at a DIY store, not a medical prosthesis maker.

But this really is all minor griping  to illustrate my point about human anatomy. Well done to the team for a genuinely scary and entertaining trailer!