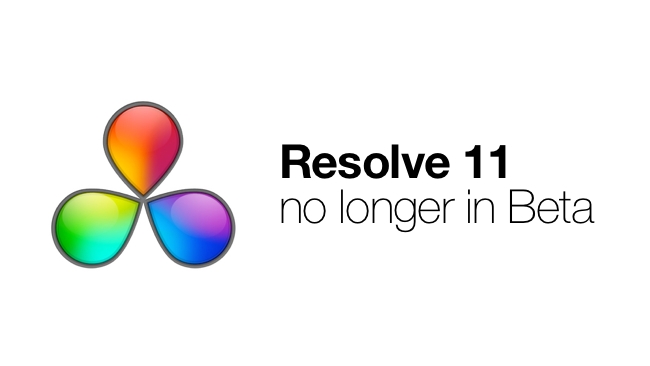 Resolve 11 no longer in Beta

The release version of Blackmagic's DaVinci Resolve is now available

Serious users have already previewed the system in Public Beta format, but now it's available commercially in a finished, stable version.

Highlights include over 70 new editing features, as well as a new spline-based keyframe control.

We won't go into all the details here as we reproduce Blackmagic's full press release later, but among other key points are the ability to import and work with still camera raw files, and to automatically colour-match across a whole production. For many editors, this will be an outstanding time saver, as - if only as a first pass - they'll be able to deliver a "sensible" grade much earlier than before.

Resolve is also moving into DIT territory, with new abilities to back up and check files from the camera, and deliver them to multiple places in different formats.

It's hard to overstate the importance of grading these days. Raw camera formats are proliferating and virtually all footage - raw or not - unless it's for immediate use in a news broadcast, needs grading to meet the expectations of directors and, increasingly, viewers.

What's more, as workflows and distribution channels get more complicated and diverse, Resolve does seem to be stepping in and providing the necessary tools.

It's doing this in a sensible way. It knows the danger of being a "jack of all trades", but it is already, effectively master of at least one - colour grading. So this is a strong position - right in the heart of the workflow - from which to build out other services and facilities.

Read Blackmagic's press release in full after the break

The new DaVinci Resolve 11 has over 70 new editing features based on feedback from professional editors. With DaVinci Resolve 11, editors now have dual monitor support and familiar professional tools like dynamic JKL trimming, audio crossfades and fully customizable keyboard shortcuts for faster editing. Trimming tools are context sensitive, which means DaVinci Resolve automatically knows whether editors want to ripple, roll, slip, slide, extend or shorten edits, based on the position of the mouse. This makes editing super fast because time is not wasted switching tools and clips can be trimmed on multiple tracks simultaneously in the same direction, or asymmetrically.

DaVinci Resolve 11 features a new spline curve keyframe editor integrated into the edit timeline that positions keyframes directly under each clip and in context with the clip. Editors can now also add and animate Open FX plugins directly in the timeline as well as use plug-ins for transitions.

The new collaborative workflow tools in DaVinci Resolve 11 allows an editor and multiple colorists to work on different workstations, sharing the same timeline and working in tandem as they complete shots. An example is a colorist could be color grading or tracking windows while another colorist fine tunes grades that are all immediately updated as the editor edits. Each user can see the timeline update so they are all working on the same job at the same time. Sharing the same timeline makes it much easier for creative teams to stay in sync and work faster on large complex jobs such as feature films and television programming.

One of the most exciting advantages of the enhanced editing features in DaVinci Resolve 11 is the dramatically better round trip collaboration with Final Cut Pro X. This is possible because more of the features in each application are compatible so projects can be moved back and forward easily. A powerful example of this integration is when a Final Cut Pro X customer might be shooting an independent film but then wants to move their edit to a large Hollywood post production facility for color grading and finishing. This  is an exciting workflow that makes it possible to allow independent filmmakers to integrate with the largest post production facilities. DaVinci Resolve 11 also includes support for ProRes 4444 XQ, the highest-quality version of ProRes that is designed to maintain the detail of high-dynamic-range video through rigorous post-production.

Color correction features have also been upgraded in DaVinci Resolve 11, including all new RAW image and color grading controls that are designed for photographers who are moving into cinematography. The new camera RAW palette features highlight and shadow recovery, mid tone detail, color boost, saturation, lift, gain and contrast. DaVinci Resolve 11 solves the single frame limitations of photo enhancement systems and gives photographers advanced control over RAW images so they can pull the maximum detail from high dynamic range footage in real time.

Adding to DaVinci Resolve’s powerful on set tools, DaVinci Resolve 11 can now securely back up and save digital camera files. The new DaVinci Resolve Clone tool copies media drives, memory cards and camera packs to multiple destinations simultaneously. All copies are checksum verified, that means users get exact bit for bit digital copies of their source media. The new Clone tool is included in the free DaVinci Resolve Lite and can be installed on a laptop for on set use.

DaVinci Resolve 11 also features Color Match, a unique and powerful automatic color chart color balancing tool that works on all types of footage including video, RAW and even film. The new Color Match tool automatically gives a primary base grade by analyzing shots containing standard color chip charts even if they were shot in different lighting conditions with different exposure and color temperatures.

“With over 1 million DaVinci Resolve customers worldwide, we have had great feedback from editors working on high end feature film and television programming jobs and we have rolled this into DaVinci Resolve 11. DaVinci Resolve is not only the worlds most advanced color correction system but now a full featured online editing and finishing system”, said Grant Petty, CEO, Blackmagic Design, “Since the first beta release, feedback from professional colorists and editors has been extremely positive and we are very thankful to have such an advanced community that relies on DaVinci Resolve for their work every day and who can provide us such high quality feedback and guidance!”