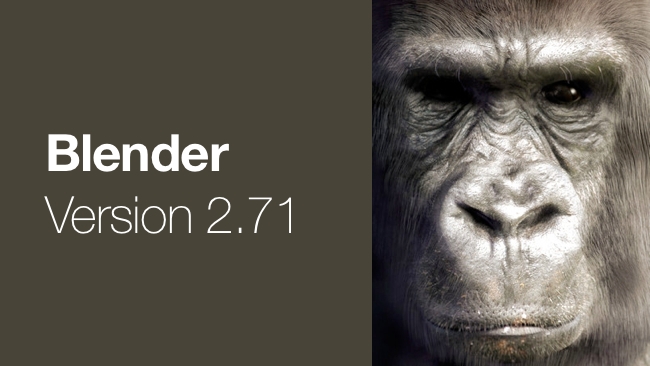 Blender 2.71, the latest version of the popular and increasingly powerful open source 3D modelling and animation suite, has been released

The Blender Foundation has released version 2.71 of the popular open source 3D suite. A special focus for this release was to get the path tracing render engine Cycles closer to feature-completion.

Cycles has also got several optimisations and speed-ups for CPU rendering. For example: scenes with transparent shadows, which render up to 50% faster. Scenes with many light sources can benefit from the “sample all indirect” option in the branched path tracing integrator, which should produce less noise.

Cycles has got support for several new features as well. Motion blur is now available for deforming objects and volume rendering can access data from the smoke and fire simulation.

While the latter enables the user to render both smoke and fire in Cycles, there is no real user interface yet, which is planned for version 2.72.

Image textures now support different interpolation modes. Before, the only mode available was Linear, while the user can select from nearest neighbour up to cubic. The latter option is only available when using the Open Shading Language (OSL) backend.

Accessing UV maps is more straightforward now thanks to a dedicated node. Shaders now can be adjusted by the number of times a ray has passed a transparent surface which is useful for speeding up the rendering of hair and plants in general. The main new feature for Cycles is baking. This process is storing lighting and shading from the photorealistic Cycles rendering engine in image textures. Those can then be used in less realistic but faster render engines like they are used in games and other real-time environments.

The Freestyle line-rendering engine now supports textured strokes. Supported are image textures and the procedural textures offered by the Blender internal render engine. For image textures Freestyle has defined a special convention of storing the start and endcap of a stroke.

The sorting of the Freestyle lines can now be defined by the user. This way, artefacts from non-optimal line ordering can be avoided.

Dynamic topology sculpting now supports drawing with constant detail sizes. In earlier versions, the detail size was dependent on how near or far the user had zoomed in, which is still available as an option. A tool similar to the colour picker allows users to select the level of detail for sculpting from existing portions of the object.

The animation system has got a set of easing functions that can be set individually for the ease-in and ease-out of animation curves. These are particularly useful for motion graphics where artists now can create harmonic or bouncing animations with only two keyframes.

Masking in both image and movie clip editors has got support for different handle types. Before, the handle type was fixed to a special kind of spline handle, but now normal bezier handles and vector handles for sharp corners are supported as well and can be set individually for every control point. Plane tracks can now be hidden and a new distortion model for lens types with a very high distortion like the lenses used on the GoPro cameras has been added which can be selected in the lens panel of the movie clip editor. When automatically setting up a scene, newly created objects are no longer placed on the shadow layer but on the layer that was last active.

This article only gives an overview of the larger new features. In addition, a myriad of small features and improvements has been added and hundreds of bugs have been fixed that existed in previous versions. Blender 2.71 is available for Windows, Mac and Linux in both 32 and 64 bit from http://www.blender.org/.