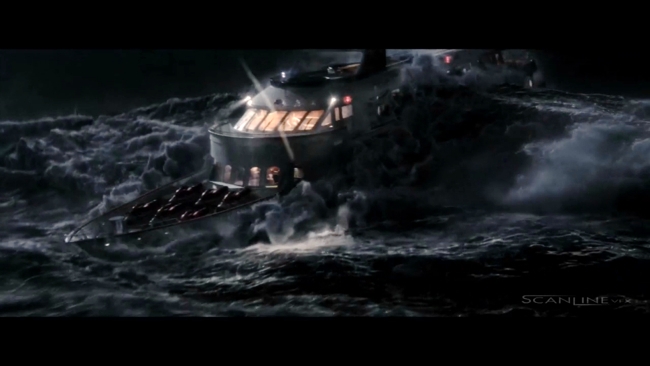 While The Wolf of Wall Street’s star and producer Leonardo di Caprio is busy praising Martin Scorsese for a ‘punk rock’ approach to filmmaking that belies the director’s 71 years, it’s interesting to note that this latest movie is patently one of Marty’s most technically ambitious.

Perhaps we shouldn’t be too surprised, given that talk of experimental filmmaking is slightly at odds with the movie’s 100 million dollar budget. And let’s not forget that Scorsese recently directed Hugo, an effects-rich film shot digitally and in stereo 3D. Nevertheless, there’s something gratifying about the way Scorsese has embraced digital visual effects to bring to life a story about greed and excess in the most efficient way possible. (Scorsese originally planned to shoot everything digitally once again, but ultimately went for traditional cameras when possible and the Arri Alexa for the green screen-based and low light scenes.)

VFX producer Mark Russell and VFX supervisor Robert Legato re-united with Scorsese to oversee several studios handling 400-plus visual effects shots, including a range of matte replacements, 3D augmentations and even a number of fully computer-generated scenes. Scanline VFX, a studio renowned for photoreal fluid simulation work was the vendor tasked with handling many of the more complex shots, including an extended storm sequence in which the film’s protagonist Jordan Belfort’s private yacht, ‘Naomi’, through a heavy storm in open seas, with the boat ultimately capsizing and its passengers airlifted to safety... only for a plane originally sent to transport them has its engine hit by a seagull, explodes and crashes down into the ocean.

For this and two helicopter crash sequences, Scanline worked with Legato using a ‘virtual stage’ technique to conceive, plan and cut the shots. Scanline also worked on a number of other studio-shot crowd sequences set aboard the yacht during calmer moments, both in harbour an out to sea. A real version of the yacht was never actually used in the film.

Another vendor, Brainstorm Digital worked on several key shots and enhancements, including a pullback depicting lead protagonist Jordan Belfort (di Caprio) playing tennis while in prison. The shot had been achieved with a mix of crane shot carried out in Brooklyn and a prison environment shot in California. Scorsese decision to re-time the shot ultimately required all supporting actors to be removed from the shot and replaced with new green screen shot performers carrying out their moves at the new speed. Brainstorm also helped make riches from rags in a number of shots featuring lavish mansions, beachfront parties, Italian and Swiss locations and a lion prowling through Belfort’s stock trading office.

(Lightworks users might already know that both Hugo and Wolf of Wall St were edited using Lightworks).

VFX Breakdown videos after the break