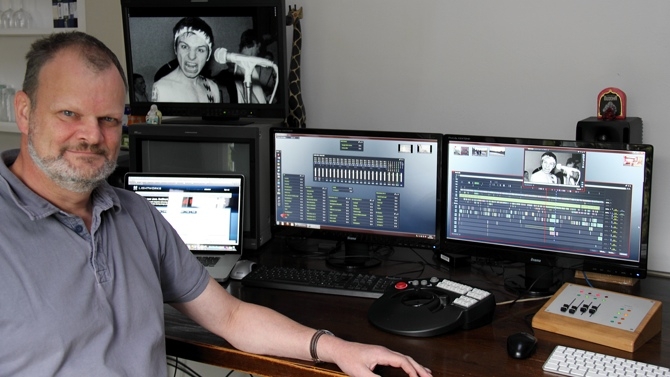 The 10th December 2007 Led Zeppelin concert at the O2 Arena was the most ambitious live screen performance of its time. Henry Stein describes how he edited the footage from this spectacular concert

Directed by Dick Carruthers with a 30 metre wide, 10 metre high Stealth screen, 14 HD cameras, a brand new state of the art Kahuna HD vision mixer and several week of programming and rehearsals, it was without doubt the most spectacular live concert and  live display screens ever seen.

At the last minute it was decided to record the all the screen cameras and add some camcorders and super 8 cameras, to capture the whole event, and Carruthers insisted on HDCAM SR.

Fast forward 4 years, and after viewing the rushes and line cut, the decision was made to edit the footage to produce a DVD and film of the concert.

Using Lightworks’ Alacrity all the HDCAM SR rushes were loaded at offline resolution, the standard definition Super 8 footage uncompressed, and then everything was nsynced up to the main concert for editing to commence We - Dick and Henry spending several months experimenting and editing.

A year later, in May 2012, we un-archived all the material back onto the Alacrity, which we decided to continue using for consistency, as most of the concert was near finished. After two weeks of tweaking the edit, the hard drive on the Alacrity died!

Backing up is a good thing

As a daily backup was kept on another drive, we brought in the new Lightworks, loaded the project and despite changing from a seven year old Lightworks to the latest Beta software, everything came back immediately – all 6Tb of rushes, the edits and the hundreds of effects ….and we went on working.

On completion of the main DVD edit, it was conformed to uncompressed on the Lightworks, and we turned to the film version, the problem being it had been shot at 25fps, and cinemas still demand 24fps.

The old method of just slowing it all down and pitch shifting the sound was obviously totally unacceptable, and Dick wasn’t  happy with any of the automated conversions as they either put little skips in every second ; many of which were both very noticeable and often where they weren’t needed….or it smeared it all into a very soft and ghosted whole…terrible on anything moving fast and especially left to right… We decided to re-edit in a 24p project.

The conform was copied into a 24p project with all the effects and renders stripped off, the sound exported as WAVs then reimported to 24p. Now all the cuts were in the correct place, the concert was the correct length, but all the shots drifted out…

Syncing: A patchwork of edits

Thus the fun began. Shots of 1 second or less were OK, with a bit of a scroll; non-sync shots were OK, shots of 2-3 seconds could be slipped to sync enough, but anything critical or over 3 seconds had to be frame cut, i.e.: 1 frame removed every second. The cuts were either hidden with dissolves, blends, or on bits of suitable movement.

Then the original dissolves were re-added with frame cuts on both sources during the dissolve, and the DVEs, masks, blends and other effects were separately copied from the 25p project into the 24p, tweaked, and dropped on.

The Super 8 material however fell apart in 24p, as much of it had been vari-sped to sync. Because these were interlaced PAL, these were de-interlaced in the 25p project using Boris Red, rendered, then separately copied into the 24p project.

The images were then subjected to a crop of 2.35:1, with all the shots racked up and down as necessary. Played out to HDCAM SR it went back to be graded by Perry Gibbs at The Farm, where Aiden Farrell’s original DVD grades and layers were painstakingly tweaked and dropped back on one by one…and the new master dubbed with the theatrical 5.1 sound mix.

As Dick Caruthers so aptly put it after the film’s premiere in London, “Why spend two hours with an Alchemist when you can have Henry editing for 3 weeks?

And do everything twice ...