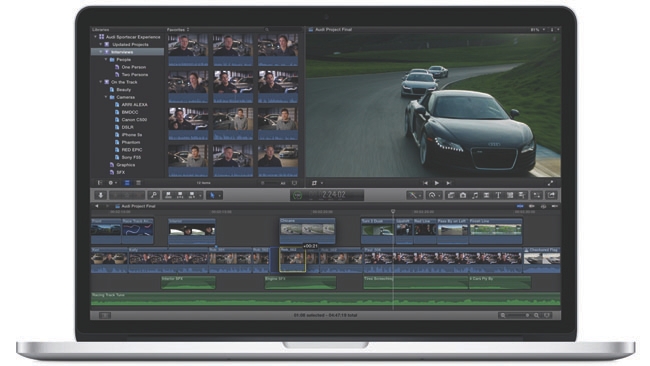 Originally teased at WWDC back in June 2013 with the completely re-designed Mac Pro, Apple has finally released Final Cut Pro X 10.1, and it’s been enhanced for fast 4K editing and external monitoring, better third-party plug-in support, and it’s easier to organize your media and projects via the new Libraries. And the software will definitely take advantage of the fast new Mac Pro, with its dual-GPUs and next-gen Intel processors and RAM.

Events and Projects are (Sort Of) Dead, Long Live Libraries

Just when editors were getting a handle on Final Cut Pro X’s Events and Projects, Apple decided to do away with them and focus on Libraries. This is actually a good thing, because everything is now unified in a single area, with projects, events and media organized for easy access to clips or audio. FCP X’s strong point, along with 64-bit native support, is its deep organizational features, and it's improved with Libraries.

Before the 10.1 update, you’d find your Events in the upper corner of Final Cut Pro X, and Projects accessed next to the timeline. Now everything is organized and easier to access in the upper left-hand corner. What’s cool is the Library is marked by the hard drive(s) connected, and it’s easy to access each drive and its projects/events.

You will need to update your Events and Projects upon launching FCP X 10.1 (see this page), and be prepared to have any relevant hard drives connected; FCP X alerted me to plug in two FireWire 800 drives I used with two different clients’ video projects, to update Events and Projects.

It’s easy to share Libraries with other Final Cut Pro X 10.1 editors, or those using third-party apps like DaVinci Resolve to color correct, or Pro Tools to correct and master audio. According to Apple, each shared library in FCP X can contain media or edited projects, or both, if you wish. The libraries can be saved locally or to a shared drive.

As promised by Phil Schiller at WWDC 2013, Final Cut Pro X 10.1 supports 4K external monitoring, and Apple suggests using the new Mac Pro’s HDMI port to plug into a new 4K monitor, or using a device from a company like Blackmagic Design or AJA to connect up to three 4K monitors via Thunderbolt 2. 4K editing has been supported by FCP X since its release in 2011, but it’s gotten better.

While you may not need the new, blazing-fast Mac Pro to edit and export 4K ProRes video files, it doesn’t hurt to have those dual-GPUs to make things faster. However, a well-spec’d 2012/13 iMac (even a mid-2011 rocking 16GB or greater of RAM) or MacBook Pro should be able to handle these tasks with ease.

Curiously, Apple.com has a photo of the 32-inch Sharp 4K Ultra HD LED monitor on its FCP X page (and available to purchase with the new Mac Pro for $3,595), and there are now some 4K Dell monitor options , but unfortunately no new Apple Thunderbolt Display. RedShark News theorizes Apple may be sitting on a 4K display until the long-rumored Apple television (‘iTV’) is finally released, perhaps in 2014.

Following Final Cut Pro X’s initial release in June 2011, there has been an outright explosion of third-party plug-ins and apps, from such companies as Red Giant, FxFactory, Intelligent Assistance, Digital Rebellion, Nattress, and more.

FCP X 10.1 and Motion 5.1 utilize FxPlug 3, which allows for custom plug-in interfaces and really takes advantage of the dual-GPUs in the 2013 Mac Pro. We suspect third-party developers are really going to take advantage of FxPlug 3 with the next updates and new plug-in releases.

As with many of the updates to Final Cut Pro X since it first launched, Apple has refined or added new features and made improvements to others:

And many smaller, under-the-hood improvements. In fact, Final Cut Pro X 10.1 is not only improved to run well with the Mac Pro with its dual-GPUs, faster processors and large amounts of RAM, but it is running well on my iMac (mid-2011 with 16GB of RAM), with some 4K test footage.

Still on the Fence About Final Cut Pro X?

If you’re still on the fence about Final Cut Pro X, there's a 30 day trial. There are other NLEs you can also cut with, including Premiere Pro CC (adobe.com), Avid Media Composer 7 (avid.com), and the soon-to-be-released Lightworks for Mac (lwks.com).