RedShark Summer Replay: Why you should use Avid DNxHD and Apple ProRes 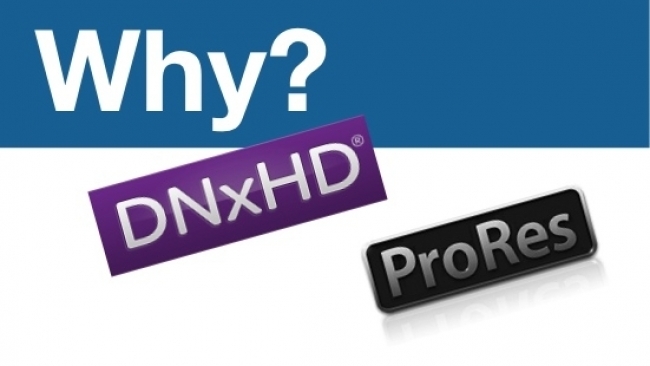 Modern cameras are simply amazing. The idea that you can record cinema-quality video on a still-picture camera that costs only a few thousand dollars still seems unreal at times.

But while it’s true that more people than ever can afford to make top-end video, this new capability poses a few questions for the ideal editing workflow.

The pictures from the latest generation of cameras - and that includes DSLRs and dedicated video camcorders - are stunning. No one expected to be able to get pictures this good for so little money.

The quality of the images is all the more surprising when you realise how much they’re being compressed to fit into the internal storage in the cameras. HD video involves almost unimaginable amounts of data. An uncompressed Full HD image (1920 x 1080 pixels) at 30 frames per second generates the equivalent of seventy five copies of War and Peace per second! Cameras compress by as much as seventy times to fit it into in-camera storage.

What that means is that less than two percent of the original data is left in some cases, which makes it even more remarkable that the resulting pictures look so good. Of course, the codec makes sure that the data that’s discarded won’t be missed too much. What remains is the data that really matters.

But even so, when an image is reconstructed from a highly compressed codec, it’s based on extremely fragile information. And sometimes, there’s just too much going on for the codec to cope with, with the result that when it’s decoded, you can see artifacts - areas of the image that have been “damaged” by the compression.

Camera manufacturers know what they’re doing. They don’t want bad images coming out of their cameras, so it’s safe to assume that in most cases, most of the time, highly compressed (whether they’re MPEG-2 or AVCHD - or some other variant of H.264) from a codec inside a camera is going to look pretty good.

Why not stick with these codecs and edit with them?

Well, you can. Most NLEs, including Lightworks, now can handle a wide variety of codecs natively. But this may not always be the best path to take.

There are several reasons why you should look for alternatives to editing with these highly compressed, so-called Long-GOP codecs.

Long-GOP codecs were designed to deliver video. They weren’t ever meant to capture or edit it

The reason that Long-GOP, highly compressed formats were created was to deliver video via DVDs, Blue Ray, Satellite and Terrestrial digital television. And, more recently, through internet downloads. Every single ounce of optimisation that went into these codecs was focused on making the picture look good at a very low bandwidth. And they’re very, very good at their job.

The problem is that almost every technical trick that was pulled to reduce bandwidth made it harder to edit video once it was compressed. The biggest problem is that to be able to see any image at all, the decoder has to reconstruct the image from adjacent frames. Possibly five or six, but equally possibly as many as fifteen. And it has to do this for every video stream - so if you want to preview a dissolve in real-time, your computer’s going have to decode two video clips even though it’s probably struggling to decode one.

All of this puts a big strain on a “normal” computer. In practise it means slow, jerky playback, and fewer effects in real-time. It may also hamper the final quality of your edit, because each time the video is decompressed to carry out an effect, it has to recompress the result, into the same, parsimonious compression scheme.

You can work with Long-GOP video, if you stuff your computer with RAM and it has enough processing power, but this is always going to be second-best to working with a codec that is designed for editing.

So, what’s so good about ProRes and DNxHD?

What’s good is that they don’t compress the video as much. They trade storage space and bitrate for quality and ease of processing. They typically need ten times as much storage. That’s a lot, but hard drives are tending towards being free, so it hardly matters these days.

In fact, ProRes and DNxHD (sometimes called “intermediate” or “production” codecs) sit in a kind of “sweet spot” between the humongous data rates of uncompressed video, and the egregious processing demands of Long Gop video.

Why not just work with uncompressed?

Because you need as much as six times more storage and data bandwidth than you do with ProRes and DNxHD. Even with disk prices as low as they are, that’s asking a lot. Moreover, you’ll find yourself unable to process as many streams of uncompressed video in real time: you’ll hit a brick wall once your disk system maxes out. ProRes and DNxHD are so processor-friendly, that even though your computer has to uncompress multiple streams on the fly, you’ll probably find you can edit more simultaneous streams than with uncompressed.

But what about quality?

Both ProRes and DNxHD are effectively “visually lossless” at their higher bitrates. That means exactly what it says: you can’t tell the difference between your original video and the same material encoded to ProRes or DNxHD.

So you don’t need to worry about generation loss. In fact, you can usually make many copies in the intermediate codec format without any apparent degradation.

Once you’ve converted, your edits will fly. These codecs are so efficient that you can play multiple streams with a fraction of the effort you need for a single stream of H.264 - based video. As an example, on my Macbook Air, playing any HD Long-Gop clip will cause the fan to come on at full power within seconds, but with ProRes, I can play a clip - in much higher quality - with no sign of the fan.

Intermediate vs Long-GOP in a nutshell

Codec science is unbelievably complicated. You’re in very good company if you don’t understand, intuitively, why one type of codec is better than another -  and, specifically, why an I Frame-only codec like ProRes or DNxHD is better than a long-GOP one like H.264.

Here’s a good way to explain it.

Imagine you’ve got a valuable oil painting. Let’s say that it’s the Mona Lisa. You need to transport it without damaging it, but leaving it on the frame isn’t an option and nor is carrying it flat.

You’ve got two possibilities. You can do it the Long-GOP way, and fold it multiple times. When you’ve finished folding it, you sit on it to make it go really flat. Jump up and down on the edges to make sure it’s packed really tightly.

This method is useful if you need to pack it into the smallest possible space.

When you unfold the masterpiece, it’s still recognisable, and doesn’t look too bad from a distance. But up close, not so much. The canvas is cracked and the paint is flaking off. If you recompress it, you’d better make sure that the folds are in the same place, because if you don’t, it won’t take much to destroy the painting completely.

You’d certainly never want to archive your pictures this way, or subject them to repeated folding and unfolding.

Or you could do it the ProRes or DNxHD way. It’s very simple. Instead of folding it, you roll it. Gently, so you don’t distort, crack or flake anything.

It takes up much more space, but is still a lot easier to transport.

When you unroll it, it looks perfect. What’s more, you can roll and unroll it almost any number of times without deterioration. You certainly could use this for archiving.

Note that the above is not technically accurate. Compression doesn’t work exactly like this, but, as a comparison, it is completely plausible.

An even faster workflow with an External Recorder

Transcoding to an intermediate codec is not your only option. These days you can actually acquire your footage directly into ProRes or DNxHD using an External Recorder.

These devices are portable, battery-powered HD recorders that are in many ways the modern equivalent of a professional tape deck, except that they typically record in a higher quality and can run for hours off batteries.

You connect an external recorder to your camera via the HDMI or HD SDI output of your camera. These digital connections carry uncompressed video direct from the camera’s sensor electronics, bypassing the camera’s internal compression. The External Recorder takes the HDMI or HD SDI signal, compresses it in real-time to ProRes or DNxHD, and then stores it on its own removable media.

Note that some DSLRs and other still cameras insist on ruining the HDMI output by superimposing viewfinder “clutter” on the video. You can’t remove this and if your camera does this, you won’t be able to use it with an external recorder. Newer generations of cameras are starting to drop this practice. A current example is the Nikon D800, which can be configured to give a completely clean HDMI feed.

You can often get better quality out of the camera using an External Recorder than by recording internally, because you’ll be recording at a bitrate of up to 220 Mbit/s rather than the typical 24-35 Mbit/s that is typical of modern camcorders.

You’ll also get a lightning-fast workflow. With your footage captured in the optimum codec for editing, all you need to do is copy your files to your computer’s media drive - or even, if you’re in a hurry, edit directly from the External Recorder’s removable media, if your NLE allows it.

Don’t be shy about using ProRes or DNxHD. They were designed for a reason. They make editing easier, with almost all the advantages of working with Uncompressed video, without the punishing data rates and storage requirements. You don’t need to worry about losing quality, and you may even get better-looking edits as a result. You’ll certainly enjoy the experience more, because everyone prefers a fluid, responsive timeline. Use an External Recorder and you can even rejuvenate an older camera, by bypassing the internal compression and recording direct to your optimum editing codec.

Just think: If you’ve got any tape-based HD camcorders that may even have broken mechanisms, you can bring them back to life, and they will give you footage that’s better than when they were new!

Lightworks is compatible with both ProRes and DNxHD. You need to upgrade to Lightworks Pro to be able to use ProRes, or make a one-off payment to use DNxHD.