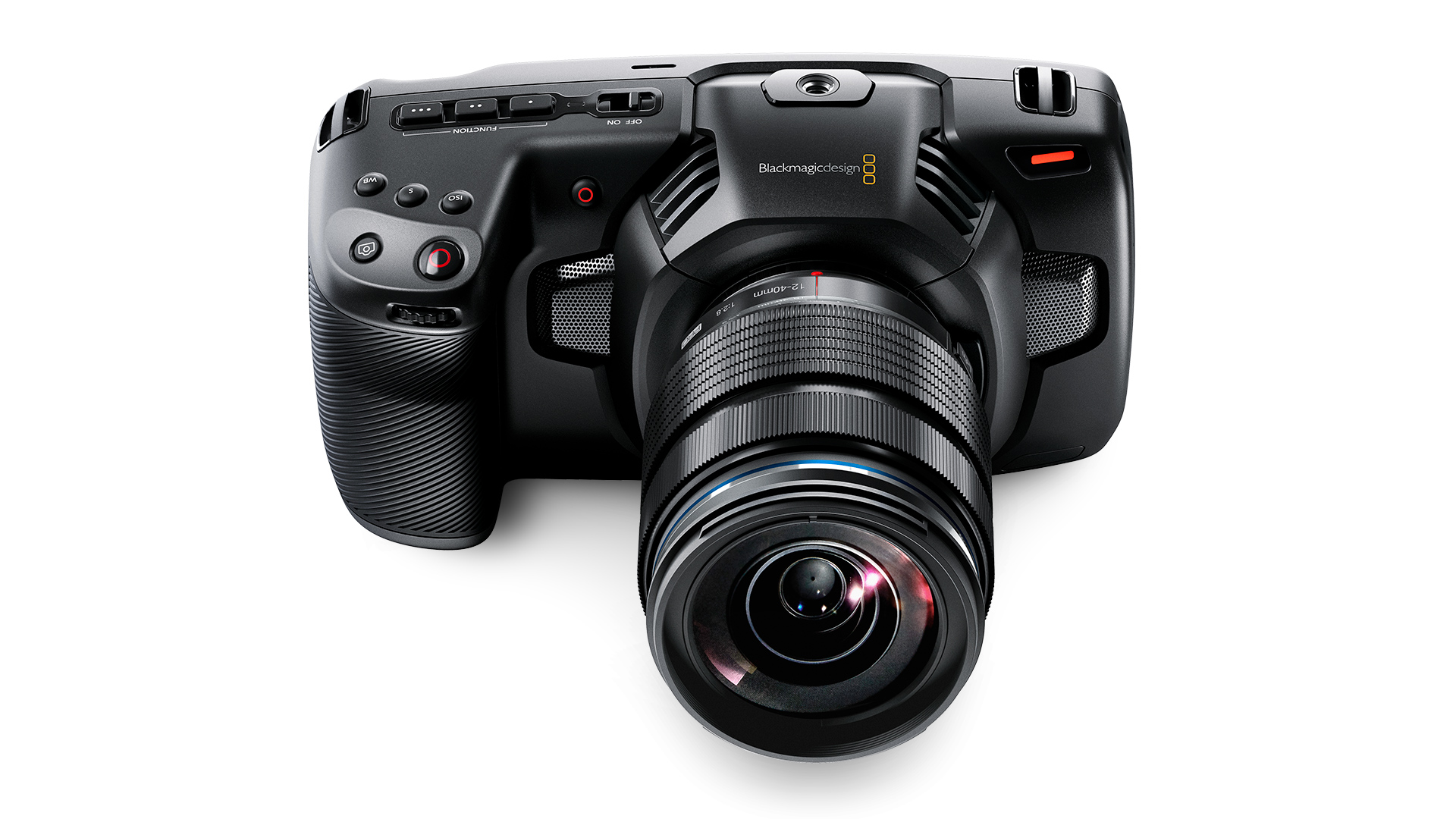 Despite advances of late, the Blackmagic Pocket Cinema Camera 4K remains a much talked about camera. Here's why it is still a camera you should consider.

When Blackmagic Design announced its successor to the original Pocket Cinema Camera, the world it seemed, went wild. On RedShark our site views went stratospheric as people clamoured to find out more information after we spotted a billboard at NAB 2018.

The camera, when it was released in 2018, wasn’t without its limitations. Notably there was no built in ND filter, a problem that plagues pretty much all mirrorless cameras, the rear screen wasn’t movable, and the Canon style E6 batteries that powered it were woefully inadequate for anything approaching a sensible operating time.

However the BMPCC 4K had four considerably useful features. A highly adaptable lens mount, amazing low light performance with Dual Native ISO, CinemaDNG raw recording, an XLR audio input (albeit in mini form), and the ability to record to an external SSD via a USB-C cable.

The BMPCC 4K is a very similar beast to the original camera in this regard, because users are willing to put up with the foibles due to the quality that it is capable of. But the story doesn’t end there, because over the course of its existence Blackmagic Design has released a number of software upgrades to it that have considerably upgraded its capabilities from when it was first released.

The BMPCC4K has always had some of the best menus in the industry. Image: Blackmagic Design.

Various other improvements have been made over time, from faster startup times to interface enhancements to make the camera even easier to use than it already is.

Possibly the biggest change made to the Pocket 4K was when Blackmagic Design introduced BRAW recording. In practice BRAW is an extremely nice way to work with raw footage. It simply flies in Davinci Resolve, and in many cases you’d think you were editing with a codec like ProRes. Not all users were happy though. A vocal minority decried the loss of CinemaDNG recording.

Unfortunately in-camera recording to CinemaDNG is subject to a whole hornet's nest of patents and company wranglings. But the fact remains that BRAW recording offers a lot of advantages over CinemaDNG. Not least the ability to record it using the SD card slot instead of an expensive CFast 2.0 card. For many users this alone will be reason enough to use it.

More recently the camera has been updated so that it can function as part of a very low cost multi-camera studio set up, complete with active camera tally lights for easy identification by the programme presenters. 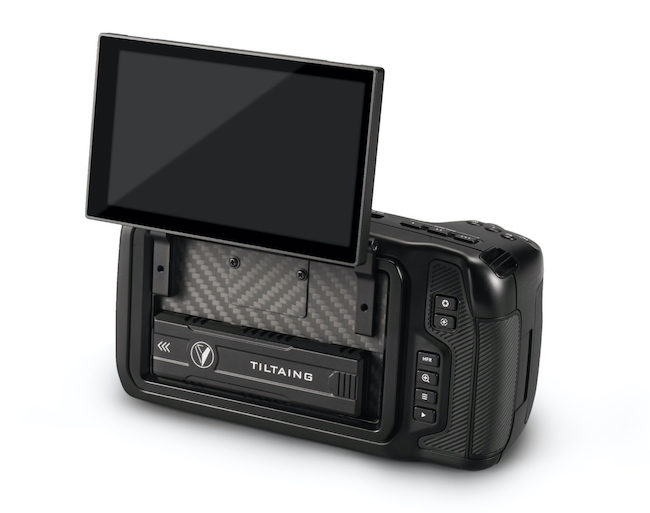 The tilting screen mod from Tilta solves some of the main criticisms users had of the BMPCC 4K. Image: Tilta.

Is it practical to use?

Much of the discussion over whether the BMPCC 4K and 6K cameras are practical to use stems from their form factors. Although the biggest criticism of all, and one that applies to most mirrorless cameras as well, is that there is no built in ND. I think that if companies included either a variable electronic ND, similar to Sony, or a rotating filter block (expensive and fiddly to make) even traditionalists would likely forgive many of the camera’s other foibles. In fact if I could have the ear of any head of camera design I would tell them to put this right at the top of their list of priorities.

The battery system that comes as standard with the camera was also severely lacking. Canon style E6 batteries simply do not have the power needed for any useful runtime with this camera, so an external battery system is absolutely essential for anyone who buys one.

DIY to the rescue

Recently Tilta released a DIY kit that gives the BMPCC 4K and 6K a new tilting monitor solution as well as some new connectivity and SSD recording. The option to record via USB-C to an external SSD was an incredibly good idea by BMD, although it did mean that there was a cable hanging outside the camera body. Cables mean untidiness, and it’s also something else to accidentally pull out. The Tilta system solved this by allowing users to use their own nVME or SATA SSD drives, slotted in behind the monitor.

The argument often goes that once a camera like the BMPCC has been rigged out, you might as well have bought a full size, or ‘traditional’ camcorder. Let’s take a 4K interchangeable lens camcorder alternative. The BMD Ursa Mini Pro G2. In the UK it costs £5399 including taxes for the body only with no batteries, so let’s use this as our comparison base. Although it could also apply to other makes such as the Sony FS5M2. 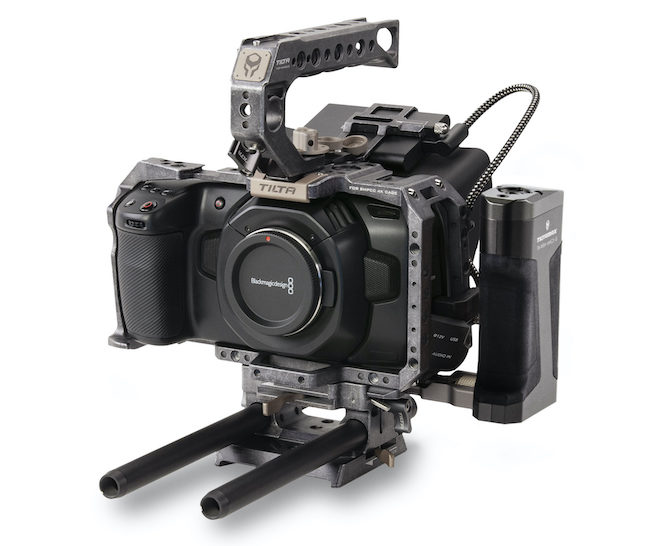 Comparative costs of the BMPCC 4K

The Pocket 4K costs £1269 including taxes for the body only. Let’s add the Tilta monitor mod, which costs £435 for the nVME version, installed by Tilta itself. Heck, let’s go all out and buy the Tiltaing Cage system for it, with a Side focus handle that takes a Sony style F970 battery inside it and top handle. This adds £323 to our total, and gives us a rig that can be powered for much longer, as well as negating the need for an external monitor. It’s a neat system. Now let’s add some variable ND filters from PolarPro . I won’t skimp, so I’ll choose the full set at 82mm to give us maximum versatility across lenses. The combo set currently costs £397.

This comes to a total of £3422, which gives us a Pocket 4K camera with four batteries, 2TB of fast SSD recording media, top quality variable ND filters, good monitoring, and a cage we can mount any extra accessories too. That’s £1977 less than a bare bones Ursa Mini Pro G2 body with no batteries, viewfinder or recording media. It’s £1492 less than a bare bones Sony FS5M2 body.

The point I’m making with this is not that you should buy a Pocket 4K instead of a Sony FS5 or Ursa Mini Pro G2, but to quell the myth that once you have rigged such a camera out you might as well have bought a traditional camcorder in the first place.

If ergonomics is your argument, I would point to the extra cost needed to purchase rigs that make the FS5 and URSA into full shoulder mount configurations. Likewise you could get hold of a shoulder kit for the 4K with the money you have saved and still come out ahead in terms of overall cost. 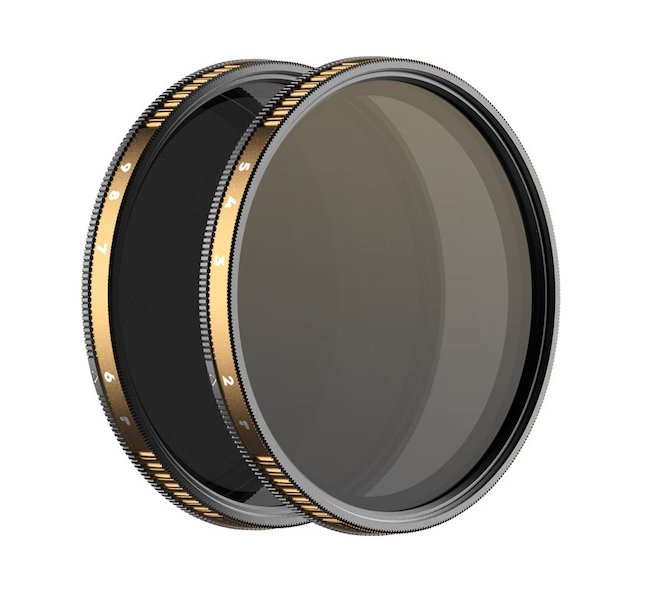 Variable ND filters like these from PolarPro are essential if you want to use the BMPCC 4K in faster moving situation. But it would be preferable to have some sort of built in system. Image: PolarPro.

True, you could buy a camcorder like the Sony PXW-Z90. But this is not really a comparable system, being aimed at two totally different markets. While the Z90 is an exceptional camcorder - I'm a big fan of it - it has a much smaller chip, a fixed lens, and no raw capability. But for run & gun documentary and getting results quickly it can't be faulted.

More traditional camcorders do give you a lot of advantages though. Connectivity and audio recording are two areas where a normal camcorder have big plusses. You can’t beat a manual audio volume dial or physical switches on the body. But what I have illustrated here is just how much bang for your buck you can get if you do go for the Pocket Cinema Camera 4K.

The market now has a number of low cost cinema cameras. The Z Cam series is another example of a camera system that needs rigging out to be practical but that offers huge value overall. Even with more recent releases like the Panasonic DC-S1 and the S1H, the BMPCC4K holds its own in terms of picture quality. Internal BRAW recording and a reduced need for an external monitor certainly helps to keep things much more compact and tidy. The M43 mount is incredibly versatile as a lens mount, too, giving you a heck of a lot of options when it comes to glass.

Okay, you won’t have full frame greatness, but there is absolutely nothing here stopping you from creating immensely high quality cinema grade footage. But for just a little bit more you can have the Pocket Cinema Camera 6K with its larger sensor and a new reduced price of £1995.

The only conclusion that can be drawn is that if you are on a tight budget for a full camera system the Blackmagic Design Pocket Cinema Camera 4K still has the chops to more than compete today.