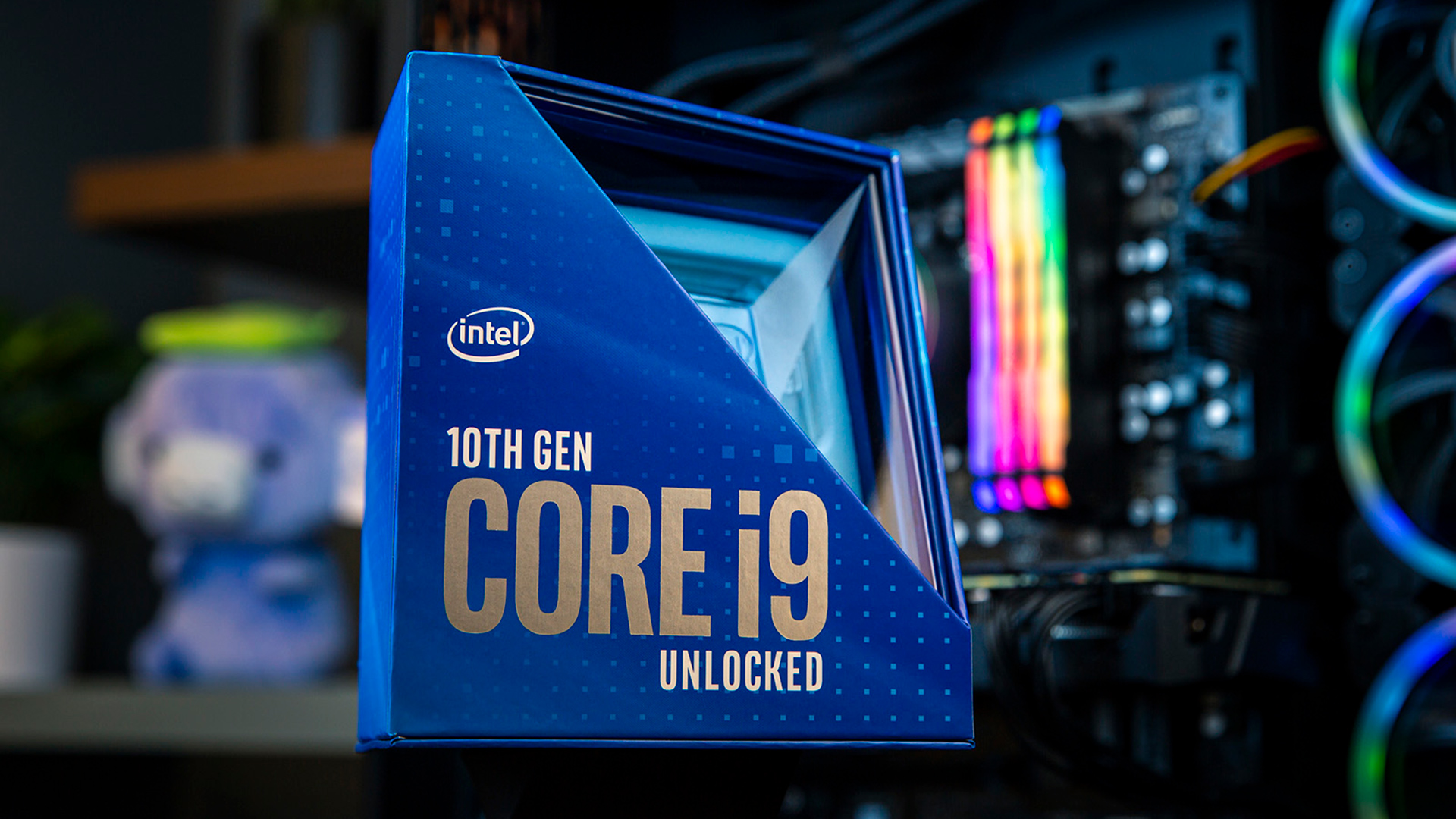 Intel's new Comet Lake S series includes the seriously powerful Core i9-10900K. While we still await the move to 10nm fabrication, can this new series hold off the competition?

Intel has launched a new family of desktop CPUs named Comet Lake-S that includes the 10-core Core i9-10900K which can legitimately claim to be the world’s best gaming CPU. That might not sound very interesting if you are a serious person who is focussed on video editing but rest assured there are some useful points we can glean from this launch.

Core i9-10900K packs 10 cores and 20 threads with a maximum Turbo speed of 5.3GHz and an impressive all-core speed of 4.9GHz. You might wonder how that is possible, especially if you cast your eye over these Intel stories from the past couple of years which make it clear that Intel has been stuck in a time warp due to its inability to move from an aged 14nm fabrication process to the long-promised 10nm process.

Laptops with Intel's 10nm Ice Lake will be shipping soon.

This 10nm manufacturing problem has prevented Intel from moving from its Skylake architecture to Sunny Cove and then onwards to Golden Cove. You can see the evidence of the chaos this has caused by taking a look at Apple’s current range of Mac Book Pro laptops where the cheaper versions of the 13.3-inch model use 8th Gen CPUs, the most expensive 13.3-inch uses a 10th Gen Ice Lake and the mighty 16-inch runs on Intel 9th Gen CPUs. 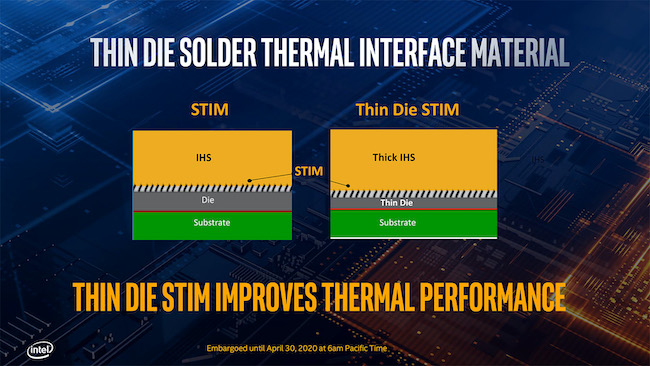 On the desktop side of things Intel has evolved its Skylake products over the past five years by adding extra cores. You may recall that 6th Gen Skylake and 7th Gen Kaby Lake each had four cores, 8th Gen Coffee Lake had six cores and 9thGen Coffee Lake Refresh had eight cores. These are all decent CPUs with Turbo speeds close to 5GHz and the potential to overclock to 5GHz on all cores however it seems like a bold move to add two more two cores to a design that has already overstayed its welcome.

Before we get to the details we need to spell out the nitty gritty that 10th Gen uses a new CPU socket called LGA1200 and requires a new Z490 chipset, however the underlying technologies are familiar as Intel is still using PCI Express Gen 3 for storage and graphics. We understand that LGA1200 will also be used for Intel 11th Gen Alder Lake which will support PCI Express Gen 4. On the good news front LGA1200 uses the same mounting system as LGA115x so you can continue using your current Intel CPU cooler. 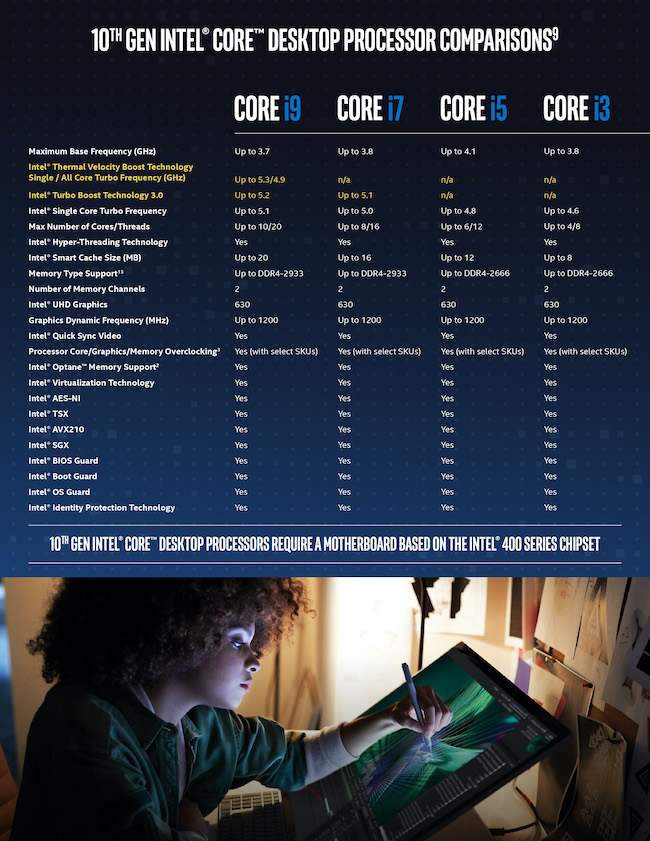 Intel boasts that Z490 supports 2.5 Gb/sec Ethernet and Wi-Fi 6 however these are add-on features that are not inherent to the chipset or platform. Of more immediate interest is the fact that many Z490 motherboards have been built to manage the 10 core i9-10900K and as a result the VRMs have been beefed up to such an extent that many motherboards have 12 or more 90A power stages where a Z390 board would often make do with eight 50A or 60A stages. That extra complexity adds to the cost of the hardware such that you can expect to pay £400 for a fully featured Z490 motherboard. 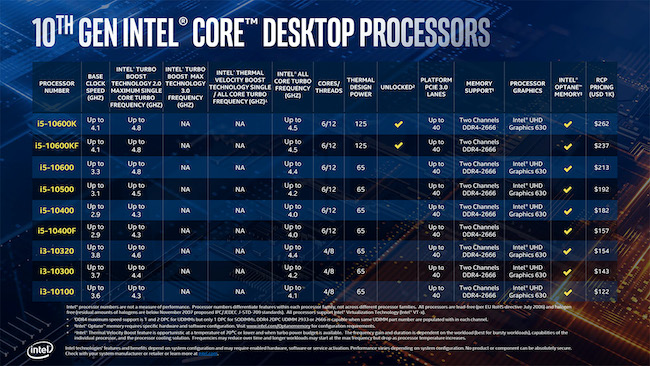 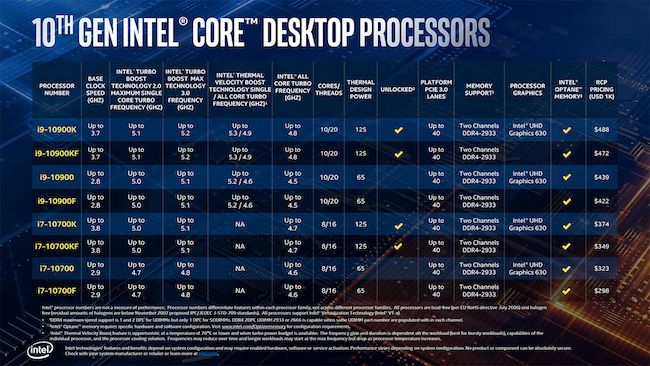 If you run a Core i9-10900K at its rated 125W TDP you will see the clock speed pull back to 3.7GHz on all cores but if you set the power to ‘Unlimited’ you can expect the CPU to draw 210W-225W on Auto settings and then to operate at 4.9GHz on all cores. This is the point where experience suggests the Core i9-10900K will overheat but if you use a decent CPU cooler you can actually expect the CPU temperature will remain below 85 degrees C under a constant, unrelenting workload. If you play games the workload is lighter and the CPU will be much cooler.

85 degrees may sound hot but it is much the same as Core i9-9900K, despite having two more cores, higher power draw and an extra dollop of clock speed. The secret lies in the fact that Intel has removed 0.3mm from the silicon of the processor die and has added 0.3mm to the copper heat spreader to maintain the Z height. This helps the heat to shift and we were impressed in testing by the small temperature variance between the various cores. 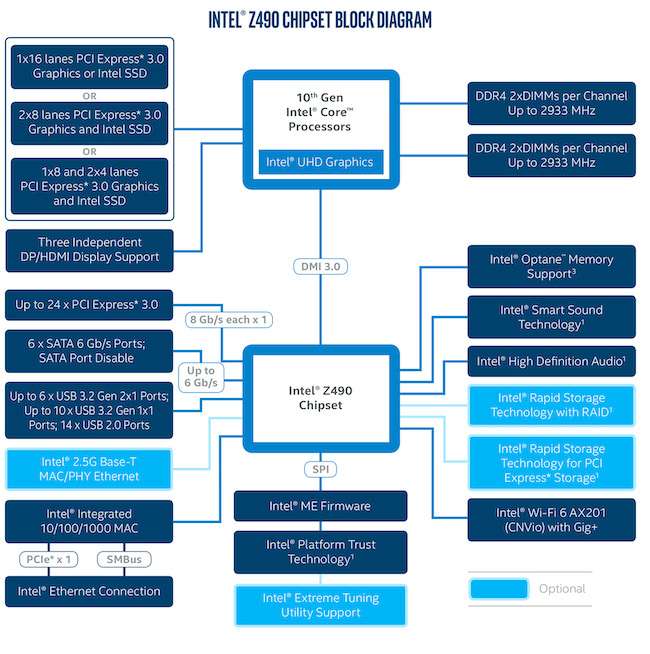 If you are in the market for a new high end PC and are currently considering a 12-core AMD Ryzen 9 3900X or 16-core Ryzen 9 3950X we feel you should also consider a Core i9-10900K, although the requirement to buy a new Z490 motherboard means you are looking at an expensive upgrade. Further down the Intel product stack you will note that Core i7, Core i5 and Core i3 models respectively have eight, six and four cores and they all sport Hyper Threading so even the meanest Core i3-10100 has four cores and eight threads.

There is no denying Intel has worked hard to keep Skylake relevant in the fight with AMD Ryzen 3000 and the Core i9-10900K has worked out better than we expected. Having said that, the sooner Intel can progress from 14nm the better.