Insta360 X3 review: How one of the most popular action cameras just keeps getting better (part two) 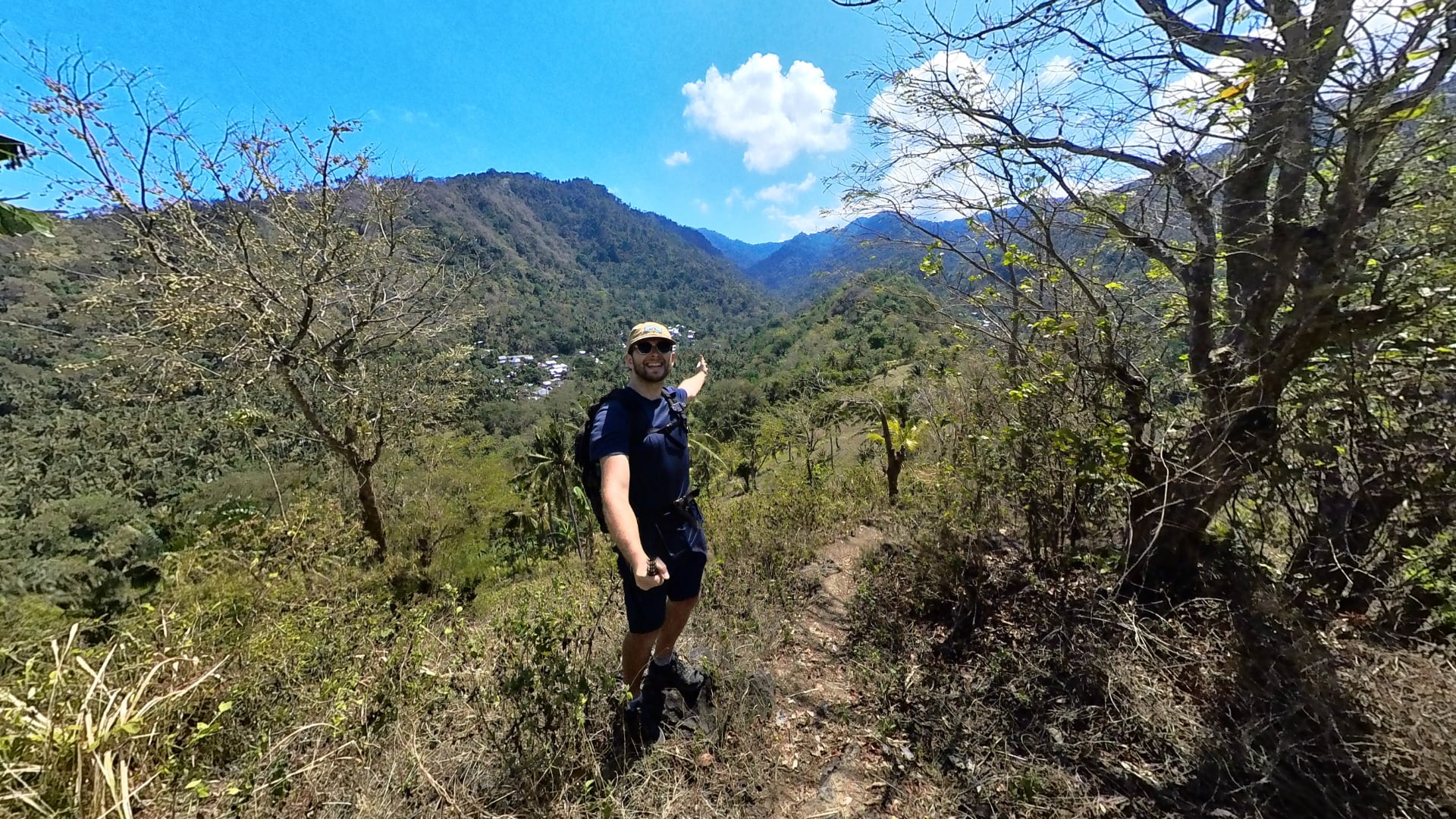 In Part One of this review, we looked at the specs of the camera and gave our first impressions of what we thought. Now it's time to take it out and see what it can do.

First up, hiking. Naturally, I tried filming 360 video. On start up, the camera opts for a default 360, 5.7k at 30fps. I switched to 25fps and hit record. My first impressions are as hoped – the quality of the image is beautiful, the half-inch sensors warranting their inclusion immediately. Stitch lines are pretty much non-existent (see for yourself below) and the only thing I can really complain about is how hot it is.

In normal video mode there’s always that worry that sky and highlights can be blown out (a common occurrence with any action cam). However, I was pleasantly surprised by how good the highlights were. It was the shadows that felt slightly “dark” to me.

This is where Active HDR does a fantastic job of balancing the two. The shadows certainly look lighter and I can see far more detail – particularly useful when I’m walking in and out of bright highlights and dark shadows on a forested hilltop. In comparison, normal video mode is an image with much more contrast, while the Active HDR mode gives you a flatter image (certainly easier for grading in post).

Aside from the lack of 4K 60fps (a noticeable drop in image quality, by the way), I can’t see myself switching out from HDR mode. There are certain scenarios, such as when I walk into a particularly dark patch of forest, where the HDR begins to fall apart. In this case, it’s best to switch back. Coupled with the half-inch sensors, I think it’s a very welcome addition in the X3. Take a look for yourself.

As for audio, the in-built microphones are okay – the standard you’d expect from any action camera at this price point. When filming in windy conditions with the selfie stick extended away from me it’s not ideal, as you can hear in the video below. I highly recommend using this camera with the RØDE Wireless GO II setup if you want to capture reliable, quality audio.

Naturally, as any user would, you have to take a photo or two. If you don’t take a photo and share with the world, have you really completed the hike? With the timer, I found that there was quite a lag with the photo being taken, to the point where I wondered “is it done yet?” This may well be addressed in a future firmware update.

The photos themselves are good. I particularly enjoyed the fun of “looking around” in the 360 file they produce, as if you captured the whole world you were standing in at that moment. You can also pick your frame and save that as a standard 16:9 photo. Highlights in these are good in the sense that they’re not blown out, but I do feel shadow details are lacking a little. Still, at 72mp they’re large, high-quality files that removes the need to ask a random tourist (who doesn’t know anything about rule of thirds) to take a photo of you.

As already discussed when I first used a 360 camera in the Himalayas, I love the freedom 360 gives me when filming outdoor adventures. The X3 is the epitome of everything good about that freedom – I won’t be hiking without it now.

Next, cycling. I tried out more comparisons between Normal Video Mode and Active HDR Mode, the results of which you can see below. One thing I’m particularly impressed by is the flowstate stabilisation – something Insta360 is noticeably proud of and rightly so. Even while hurtling down hills at 71 km/h, the footage here is remarkably steady and smooth. At times, the stitch line is noticeable but only because I decided it’s okay to ride straight over potholes at silly speeds.

I also tried the new “Me Mode” – a fitting name for something designed with content creators in mind. Basically, 2 files are recorded (one from each lens) before being stitched together to create a single 180° video with you as the main focus. You can pick your framing with a number of options from “Linear” (tight framing with little distortion) all the way up to “MaxView” (very wide angle with some lens distortion).

If you’re a little lazy and don’t want to go through the hassle of reframing and keyframing a full 360 video in post (that’s completely understandable), this is great. If I just want to talk to camera while on my bike, I mightn’t need the other 180° ahead of me. This could prove frustrating if I suddenly want to reference something I’m looking at ahead but can’t turn the camera to focus on it in post. The maximum file size for this mode is only 1080p, too. Despite that, I can see this proving popular with vloggers and anyone skiing, cycling, skateboarding or surfing.

Previously, there was only so much I could do with my driving sequences using traditional action cams mounted in various different ways. Now, I have the luxury of looking forward, showing the beautiful coast we’re driving along, before reframing around to look at the bike. No need to stop and start, setting up cameras and fiddling about. The results are great. Once again, flowstate stabilisation is really impressive here (even more so than the cycling – not potholes here).

You could even replicate some FPV drone shots. Using the extended Insta360 selfie stick (it’s 3 METRES long), I captured a unique perspective driving along the road with a “top-down” view, before reframing to pan up, revealing the location. It’s a good example of the flexibility you have with 360 footage. With such a large selfie stick, the only thing you’ll want to bear in mind is overhead wires, trees and the fact that you look quite strange.

In case you couldn’t tell, I was driving to the beach to test the camera’s underwater capabilities (it’s a hard life). While I’m still not totally convinced that bullet-mode isn’t actually just some sort of sling-shot method of warfare seen among units in Total War: Rome II, I decided to give it a go here on this empty stretch of sand.

Am I going to use bullet-mode in one of my documentaries? Absolutely not. Will it make for interesting, exciting content on the likes of TikTok and YouTube vlogs? Absolutely yes. There was a slight issue with the stitch line here which is probably user error. Ultimately, looking at my face, I’m clearly having fun. It’s a gimmick, but fits right at home in the world this camera’s built for. The 4K 120fps is a marked improvement on the ONE X2.

Switching to single lens turns the X3 into more traditional action cam, shooting with just one of the lenses (I can toggle which one). I opted for the max resolution of 4K which only films up to 30fps – not a deal breaker, but certainly not competing with other action cameras on the market. Above water, the footage looks great – I like the colours and the highlights aren’t blown out at all. In terms of vlogging, I think it passes. The audio was actually pretty good in this scenario, when compared with my hiking tests! Provided you’re not filming in the wind, the in-built mics can do the job.

Unfortunately, underwater, the footage wasn’t so good. Everything was blurry. This should come as little surprise due to the fact that 360 cameras have curved lenses. This produces diffraction of the image, resulting in blurry footage. I didn’t know about any of this until I got home, so I had a lovely time swimming among corals and fish but you’ll just have to let your imagination decompress the blurry footage captured. In short, if you want good quality underwater footage, you’ll be needing the underwater housing that can be purchased separately. The positive is that the X3 lives up to the 10m waterproofing claim. No problems there whatsoever.

After all of this testing, I still had some battery left – pretty much in line with the estimated time of 81 minutes. Not bad for such a small, powerful little camera. If I was out for the day, I’d probably want to have a spare battery and 128GB memory card for peace of mind, to ensure I can capture everything I want.

In terms of apps and software for editing 360 footage, Insta360 has established itself as an industry leader. While I personally prefer to cut and edit everything in Premiere Pro, the Insta360 Studio app is undeniably fun.

Of course, it’s worth remembering the X3 is primarily targeted at the fast, slick nature of social media platforms and content creators. If you’re looking for that, you’ll be delighted with the array of tools in the palm of your hand here. Editing is intuitive and fun, making it easy for just about anyone to create fun 360 videos on their phone in minutes. That’s the whole goal here.

For traditional stooges like myself, I feel much more at home on the Insta360 Studio 2022 desktop app. Here, I drag in my footage like a neanderthal, cut it however I want with reframing and keyframes, then export that footage as a classic 16:9 video that can be dragged into Premiere Pro. I won’t lie – it feels a million times better than using my fat fingers on a small phone screen. 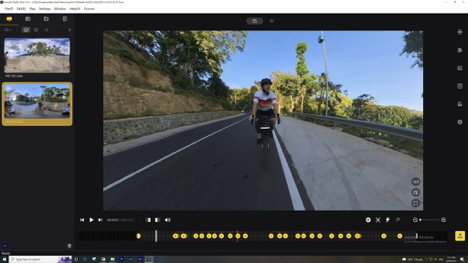 My favourite tool is “Deep Tracking”. I draw a box around myself or an object that I’d like to focus on and the AI automatically locks onto that, no matter where the object moves. It’s far easier than having to reframe and keyframe every second. In general, it’s a very intuitive, easy to use piece of software. Better than the rival GoPro Player, I think.

Conclusion: as good as a 360 camera gets

Insta360 has dropped the “one” on the X3 “to keep things simple”. That’s a rather fitting decision that reflects what this camera is all about. The brief here was clear – build on the success of the ultimate pocket 360 action camera, the One X2. The X3 makes it easier—and most importantly, more fun—to capture and share. From content creators to athletes, travellers and even your next door neighbour, everyone can now easily create viral-worthy content.

Even for people like myself (not interested in the quick viral content on TikTok), it’s a great tool in my filmmaking itinerary. For any outdoor adventures and sport, this thing’s coming with. Whether it persuades current owners of the One X2 to upgrade, I’m not sure. Certainly, with a price point of $449 (just $20 more than the One X2), if this is your first foray into the world of 360 cameras, you don’t get better than this right now. All signs point toward another big hit here for Insta360. If I’m a competitor, I’m nervous as hell.

(And in case you missed it, check out Part One of this review here.)