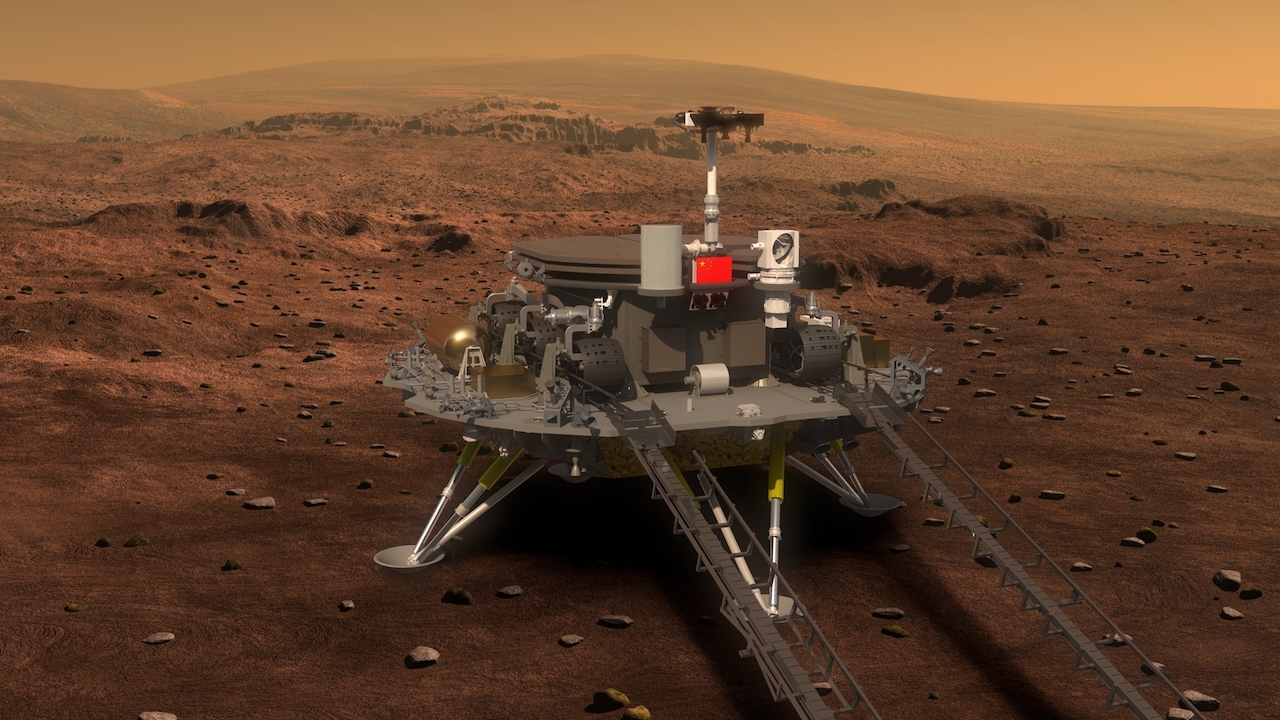 An artist's impression of the Chinese Zhurong Mars lander.

With China now becoming the second nation to successfully land a spacecraft on Mars, the race is on to bring the Red Planet to life for an earthbound audience.

On May 14, the Tianwen-1 mission, China’s first interplanetary endeavour, landed a rover on the surface of Mars, 10 months after it was first launched into space by a Long March 5 rocket in July 2020. China thus became only the second nation to achieve this after the USA, an all the more remarkable feat given that it was at its first attempt.

The old Soviet Union landed a probe called Mars 3 in 1971, but it only lasted a couple of minutes before failing — sending back a single, grey image with no detail before it did. Since then the USA has very much ruled the Martian roost, though other nations have variously entered Martian orbit and/or managed to crash and strew various machines across the planet’s surface in the decades since.

China’s Zhurong rover (the name comes from an ancient mythical fire god) will hopefully now drive down a ramp and spend around three months exploring its near environs.

The 240kg rover carries two panoramic cameras, so we’re expecting some good pictures to come in soon from an area last explored by NASA’s Viking 2 in 1976. That is, of course, providing China’s National Space Agency decided to share them with the world. But the expectation is very much that they will as the new space race is being run on social media, normal media, and with as much audio visual firepower as possible.

Space exploration has ever been thus. We’ve written before about the innovation and attention to detail that NASA brought to the video table as they tried to sell the Lunar program to an increasingly jaded America public. And in a new century and with a new solar body to explore (and expenditure to justify), the same is happening again.

Perseverance set a whole new standard with the coverage of its own landing back in February, and it’s still setting new landmarks when it comes to extraterrestrial imagery. Its latest innovation is a video that shows the third flight of its Ingenuity helicopter in, of all things, 3D.

The 54-second, 100 metre flight was captured by Perseverance’s zoomable dual-camera Mastcam-Z imager. The frames of the video were then stitched together and reprojected to optimize 3D viewing when seen through colour-filtered glasses. You can watch the video here — providing, that is, you can find a pair of 3D glasses stuffed in a drawer somewhere.

The 3D video follows in the wake of audio recently released by NASA that captures the sound of the thin Martian wind, as well as the alarming series of bumps and grinding noises as Perseverance labours its way across the Martian landscape. Somewhat impressively, these are provided by a standard, off the shelf DPA system consisting of a 4006 Omni Mic, a MMA-A Digital Audio Interface which digitises the audio and sends it to an onboard computer via a USB connection, and a MMP-G Modular Active Cable which DPA says act as an “ultra-transparent preamplifier.”

Technically, sound had been recorded from the Martian surface before, but not by instruments designed for the task. The DPA mic was originally intended to record sound from the landing, but failed to do so, instead providing sound from interplanetary space during the craft’s journey to Mars and now the exploration phaseof the mission— both considerable firsts for audio from the Red Planet, as well as a very sweet bit of product placement for DPA.

Expect to see a lot more of this sort of thing as the race for Mars hots up, and especially as private enterprise starts to get more and more involved. Companies such as Elon Musk’s Space X are very familiar with the power of the moving image already. Indeed, you can still track the orbital position of Musk’s Tesla Roadster that he so memorably shot into space on top of a Falcon Heavy back in 2018. And if companies such as his start landing craft on Mars with anything close to the success rate of China, you can bet that everything will rapidly become as realtime and high resolution as possible.

CNSA did indeed release the first pictures from its Zhurong rover on 19 May. A monochrome forward pic shows the ramp the rover must drive down to the surface with the flat plain of the Utopia Planitia ahead, while a colour rear shot shows the fully unfolded solar array and communications antenna. 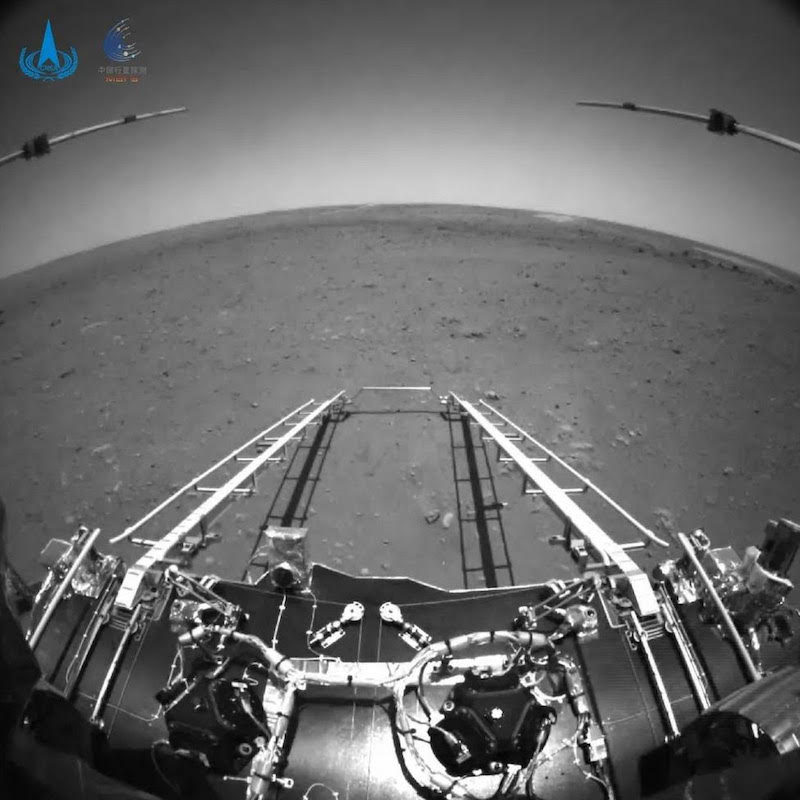 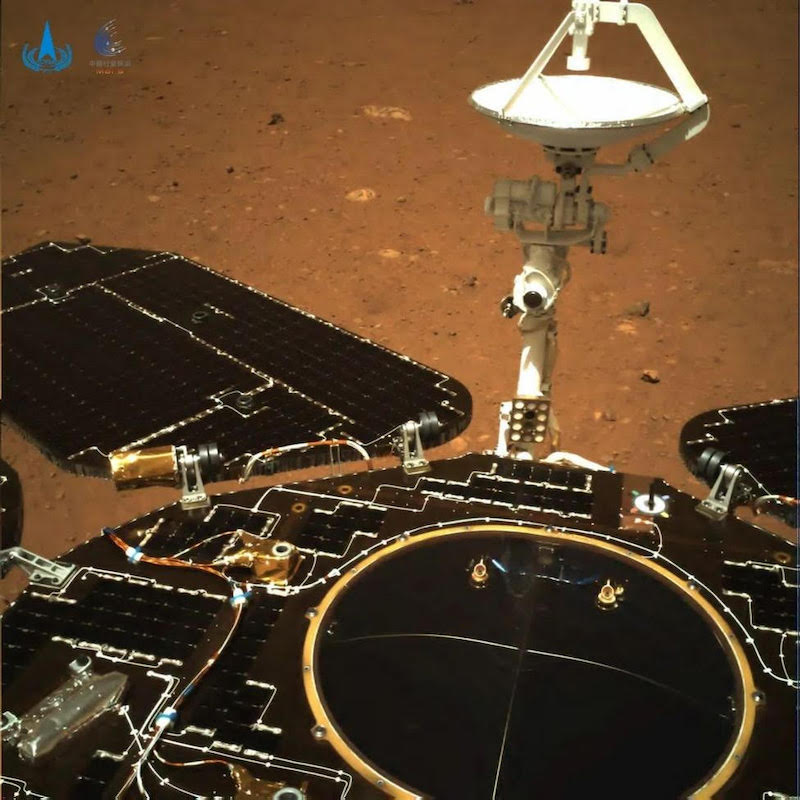