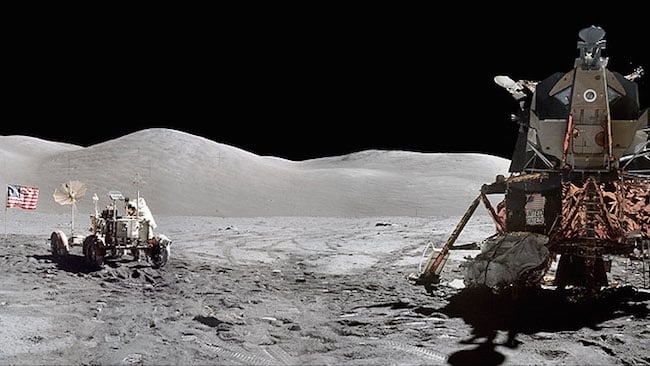 50 years ago, humanity first set foot on the moon. It left not too long after, on December 14 1972, and some of the most iconic footage of our short exploration there remains that of the Lunar Lander lifting off from the surface for the final time. This is how NASA did it, third time lucky.

We have written before in some detail about of some of the challenges that NASA video engineers faced over the few years of the active Lunar space programme (see Did someone wipe the moon landing tapes? for the full story). Voice, telemetry, biomedical data, and television all had to share the same transmission link from an antenna atop the Lunar Module, and television only got allocated 500kHz of the spectrum for Apollo 11, for instance. Given that the commercial television of the time relied on having 4.5MHz at its disposal, there was therefore a bit of a problem.

All of which makes the footage of the ascent of Apollo 17 away from the Moon all the more remarkable. The explosive bolts sheer, the engine fires and then the camera, mounted on the Lunar Rover parked 145 metres away from the Lander, automatically zooms out and tilts upwards following the Module’s path into the inky blackness of space.

Seeing that we haven’t been back there since it’s a good job that everything worked perfectly. But it really was a case of third time lucky as both the attempts to capture take-off from Apollo 15 and 16 failed for different reasons.

For these final three Apollo missions RCA supplied colour television cameras made to the strict weight and volume parameters that NASA imposed on the project to make sure everything could get out of Earth’s gravity well. The cameras were very successful, capturing images of numerous EVAs, but while they could be controlled from Houston it was felt that the several second delay between earth and the Moon would make capturing the Module’s ascent impossible. So, the plan was to pre-programme the camera and hope that the NASA camera operator in Houston, Ed Fendell, got his timing just right.

On Apollo 15, the tilt mechanism malfunctioned, meaning that the camera never panned upwards and thus the lunar module rapidly accelerated upwards and out of the picture. On the Apollo 16 mission, the astronauts actually parked the rover in the wrong place, so while the camera worked perfectly it was too close to the Module and, again, it accelerated swiftly out of picture.

Happily, Apollo 17 got everything right. But what is perhaps most remarkable about looking back on it was that no-one realised the significance of the lift-off at the time. Persistent rumour suggests that NASA had to pay the networks to cover the Apollo 17 mission at all, and when the final liftoff of humanity from the Moon took place, it barely raised a mention on that evening’s news reports.

All in all, it was a good job that someone was pressing the record button.