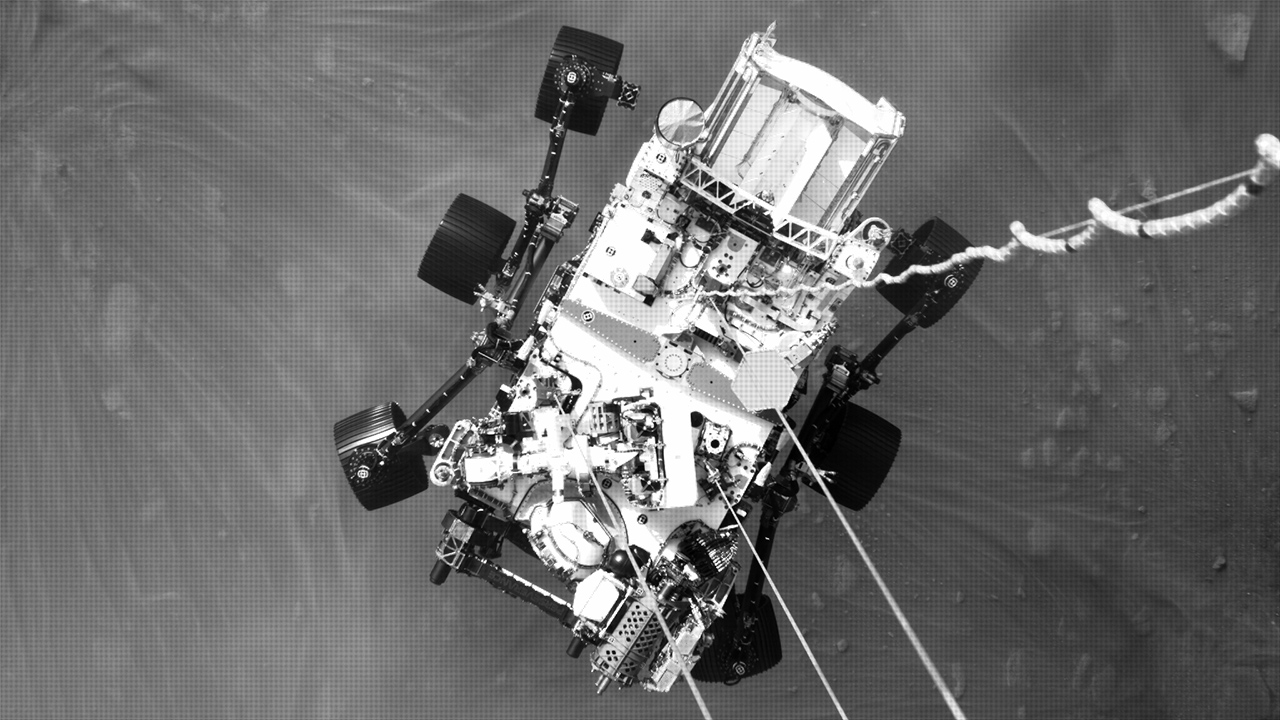 4 minute read
Getting high quality video back from Mars is no mean feat. Image: NASA/JPL-Caltech.

Major sports events like the Super Bowl, World Cup Final or the Olympics have long been the pinnacle of global televised viewing and of TV tech innovation. Over the next few years, that status could be dwarfed by a new genre of live broadcast events from space.

As nation states and commercial enterprises bid to control tickets to the moon and to colonise Mars, we’re entering a fevered new age of galactic travel and exploration.

Most of it will be televised. That’s evident at NASA which increases the number of cameras it carries on each successive mission.

The recent live coverage of the Perseverance landing was part of NASA’s PR effort to justify the $2.4 billion it took to build and launch the thing. The estimate to land and operate the rover during its prime mission alone is $300 million.

The cameras and onboard microphone “can be considered a ‘public engagement payload,’” say NASA. “They are likely to give us a good and dramatic sense of the ride down to the surface!”

As if that wasn’t enough to grab people’s attention, the space agency dubbed the rover’s entry and descent to the crater as ‘Seven Minutes of Terror’. One wonders how they will up the ante when it comes to billing the human landing which it is under presidential orders to deliver by 2033. 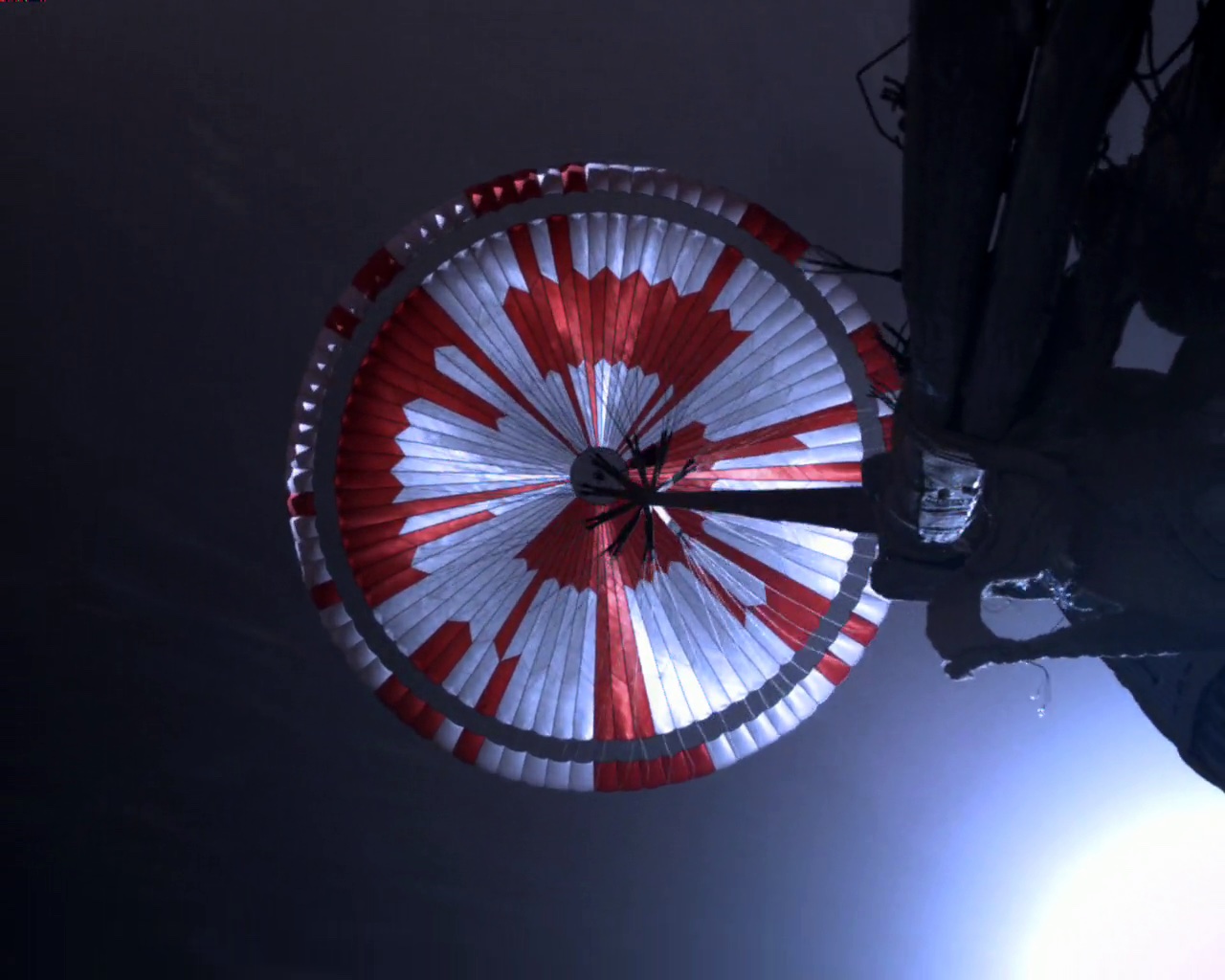 The parachute opening during the landing sequence. Image: NASA/JPL-Caltech.

Part of this sensationalism is because of the blackout in transmitting data from the craft to earth.

The delay, inconsequential between Earth and Moon but the margin of four to 24-minutes when covering the 225 million km (140 million miles) to Mars, means a delay in the ‘live’ broadcast during which apparently not even NASA’s ground control are sure of the outcome.

Another reason for not broadcasting the live stream in something like realtime is because its quality would not be deemed suitable for telly.

“We probably could do it today, but definitely not in HD,” Stephen Townes, Chief Technologist for the Interplanetary Network at NASA’s Jet Propulsion Lab told Forbes.

Perseverance is able to send data directly into NASA’s Deep Space Network (DSN) antennae on Earth. However, at between 800 bits-per-second and 15,625 bps to a 70m DSN antenna, that’s not going to cut it for HDTV which requires at least 8Mb/s.

Today, that’s not the primary way of getting data back to Earth. Perseverance was able to send data from the surface to a Mars orbiter at a maximum of 2 Mb/s, for onward relay to Earth via an orbiting satellite. There’s still a delay but 2 Mb/s is about the same bandwidth required for a stable stream from Netflix.

“Once it is on the Mars Reconnaissance Orbiter [the signals] can be sent to Earth at 500 kilobits-per-second (kb/s) up to 3 to 4 Mb/s depending on the distance between Mars and Earth,” said Townes.

Ye cannae change the laws of physics, but you can bend them a bit.

NASA is currently upgrading from radio to optical communications using a system it calls Deep Space Optical Communications (DSOC). Working with data encoded in photons and beamed over laser light is set to vastly increase the data rate.

Right now, using a 5 metre telescope in California as a receiver, NASA expect to get around 50 Mb/s using DSOC. With a larger ground telescope of around 10m diameter, it could support 200 Mb/s. 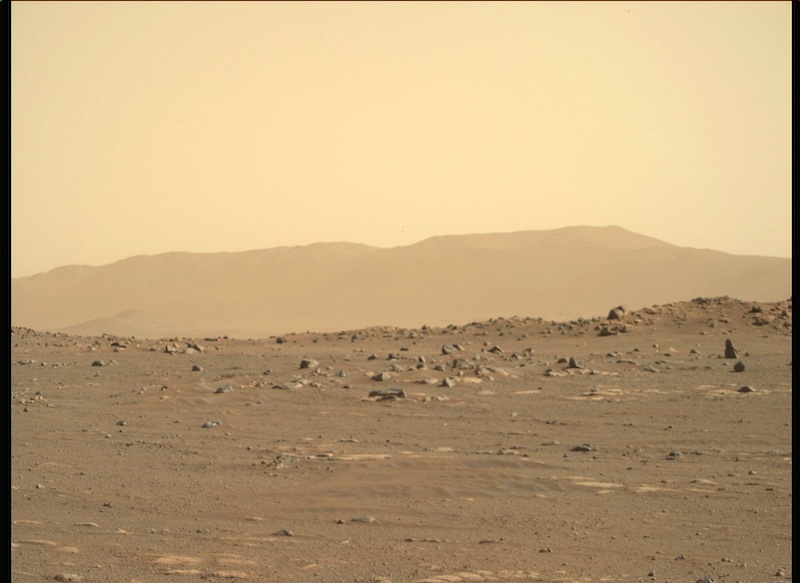 The weather is looking fine on Mars. Image: NASA/JPL-Caltech.

Eyes in the sky

Perseverance is carting 25 cameras to the Red Planet – the most ever flown in the history of deep-space exploration. Twenty-three are part of the spacecraft and two are on the Ingenuity Mars helicopter.

Of the 23, nineteen of them are fitted to the rover. They are all assembled from easily available commercial hardware, according to NASA and include nine colour cameras for engineering; three for entry, descent, and landing (two of which are in colour and dedicated to ‘public engagement’). Another two colour cameras have a zoom and are mounted on the mast that stands up from the rover deck. These are aligned to capture stereo 3D images “providing a 3-D view similar to what human eyes would see, only better” NASA claims.

There are various scientific and navigation cameras too, the most intriguing of which is the SuperCam that fires a laser at targets smaller than 1mm and vaporises the rock into plasma. An onboard spectrograph records all this to reveal the chemical composition of the mineral.

If there is anything in those sponge-like rock formations revealed by the rover then it had better watch out. That’s the trouble with tribbles. 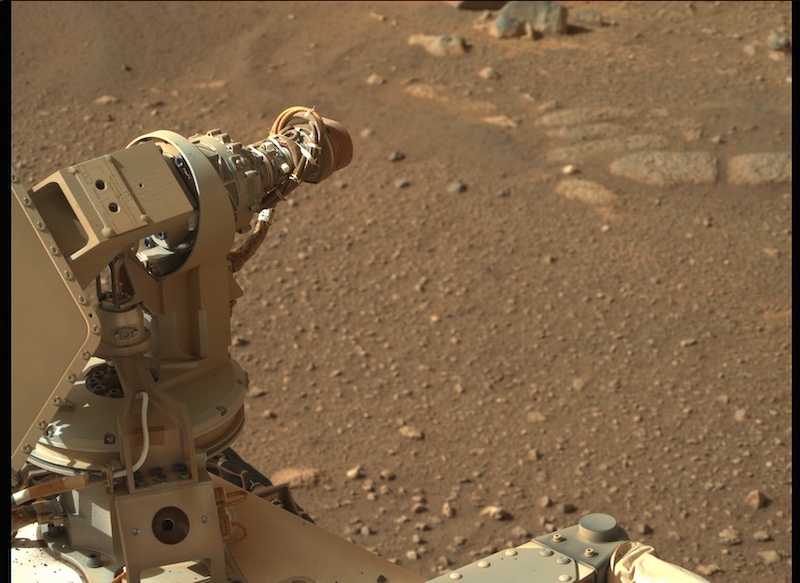 A shot of the Perseverance Mars Rover taken from one of its mast cameras. Image: NASA/JPL-Caltech.

Space watching via channels like NASA TV is already routine but it’s going to become a cinematic event over the next decade as the number of missions and the ambition of them rockets upwards.

Ingenuity, the Mars-Copter, will shortly being a series of flights filming over the Martian landscape, ExoMars a Russian and European Space Agency program plans to land another rover on Mars in 2023. There are also probes due to launch to Jupiter and Saturn’s moon Titan in the late 2020s and space tourism is being launched by SpaceX, Virgin Galactic and Russian agency Roscosmos.

Tom Cruise of course plans to make an actual Blockbuster in orbit on the ISS, in a film to be funded by NASA.

But ratings will go into stellar overdrive with manned missions back to the lunar surface and to Mars which should lift off by 2030.

Even if you think it’s all being filmed on a lot in Burbank these seat-of-the-pants thrill rides will be must-watch moments.

A constantly updated database of imagery from the Perseverance mission can be viewed here.