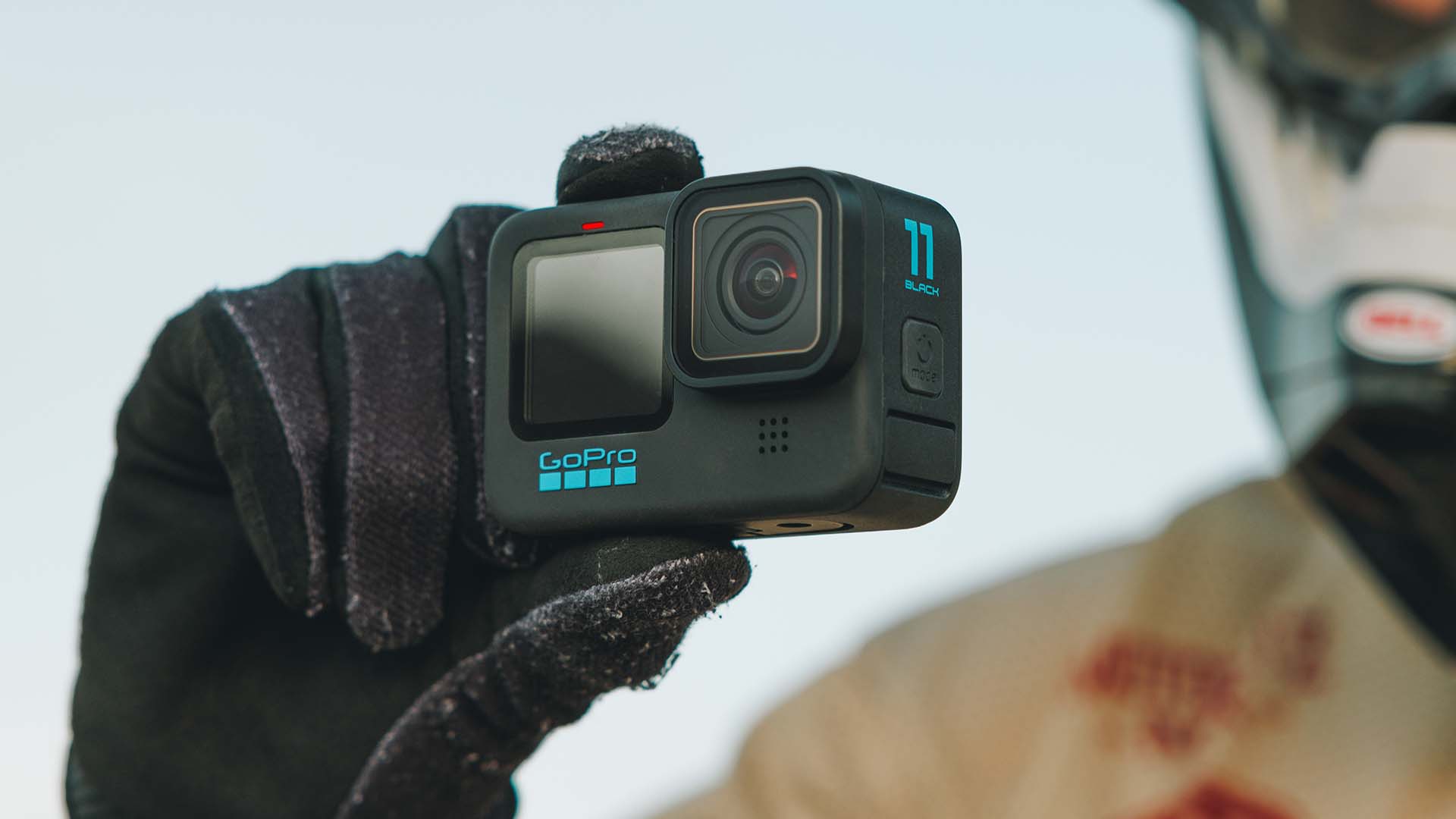 GoPro has just made its yearly camera announcement, and it's a big one. With 10-bit colour and built-in 360-degree horizon levelling, the HERO11 Black and new HERO11 Mini look set to push the bar for action camera image quality.

Watch out for our review on the new GoPro HERO11, dropping very soon, but in the meantime here's the rundown on what GoPro has announced. 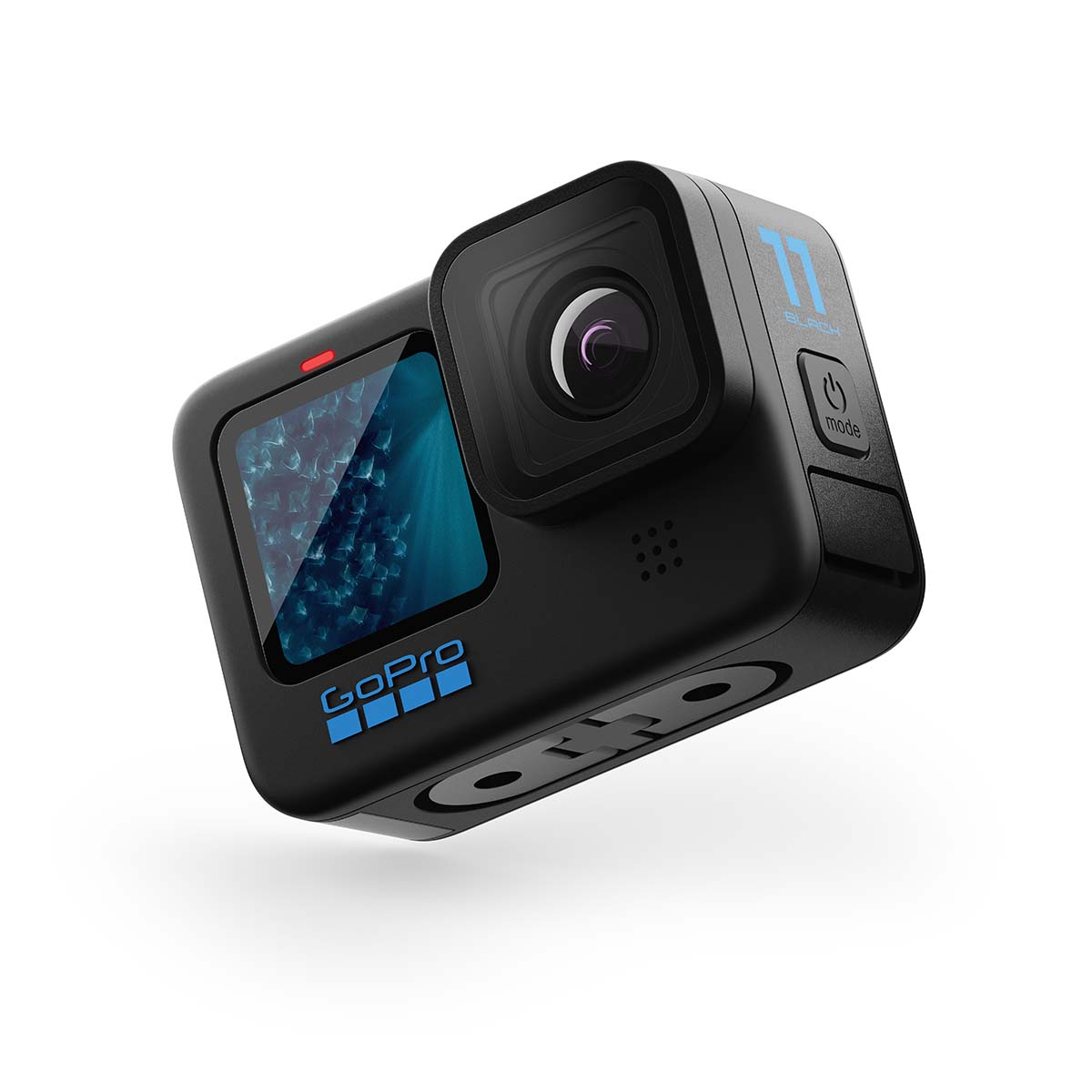 Although the HERO11 looks the same as the HERO10, inside is a slightly different matter. The HERO11 Black features the same GP2 processor as the HERO10, and, as per usual, there are more shooting modes available across more frame rates, but one of the headline features of the HERO11 is the new 1/1.9" 8x7 ratio sensor. The new sensor features the same horizontal resolution as the previous HERO10. However, it is a much taller chip, giving more height to the image.

Why do this? Well, you can put the HERO11 into 8x7 full height mode and then choose your framing options later. Previously, if you wanted to create multiple outputs for social media, such as 16:9 for YouTube, 9:16 for Facebook stories, or even 1x1, you had to choose which to prioritise. You could use the camera in a vertical orientation, but then what happens if you also want 16:9 for YouTube? Likewise, you could shoot 16:9 and find yourself limited in reframing ability for the 9:16 vertical version.

The new 8x7 sensor solves all this and lets you choose and reframe to your preferred aspect ratio later without compromising resolution. In 5.3K 8x7 mode, you're limited to 30fps max; however, changing to 4K mode opens up 8x7 60fps shooting.

The added height has also meant the addition of a brand new HyperView mode. HyperView works similarly to SuperView, by creating a dynamic stretch to the 8x7 imaging area and then outputting it as a 16:9 recording. The width of the view is similar to SuperView, but the added height makes it even more immersive for POV shots. The extreme distortion limits it to specific uses, but from what we've seen, it looks like an excellent mode for helmet mounting and first person shots, which is its primary intention.

GoPro has stated that the GoPro mobile and desktop apps will soon gain the ability to add all of the camera's digital lens options after shooting, meaning that you can put the camera into 8x7 mode and decide all your 'digital lens' outputs later. Indeed, this will simplify shooting for POV or situations where you want to move fast and don't want to lock yourself into specific modes at the time of filming.

The addition of 10-bit colour as an option should mean that the 'flat' log mode is now much more practically useful, as well as possibly allowing for a little more -EV to protect highlights without decimating the shadows.It should also give much more richness to the standard colour modes, with potentially more subtle detail and shading.

Combine 10-bit colour with 8x7 recording, and the dedicated stills mode is made somewhat redundant, with high-quality still image grabs possible with up to 24.7MP resolution. Although for users who want the absolute best quality, you can still take 27MP raw or JPEG images using the camera's Photo mode.

Another new ability, thanks to the taller sensor, is that users can now shoot with a 360-degree horizon lock without requiring the Max Lens Mod. This will be very useful for watersports since the Max Lens Mod does not have the hydrophobic coating that the primary lens protector has. 360-horizon lock is only available in framerates up to 30p in Linear 5.3K mode, so the angle of view is slightly reduced. However, if you drop the camera down to 2.7K, you can shoot up to 120fps in this mode.

Yep, HyperSmooth has gone up another number. GoPro's highly renowned stabilisation system makes some valuable gains from the added sensor height in the HERO11. In particular, all 4:3 modes, plus Superview mode, will benefit from this.

Additionally, there's a new AutoBoost mode, which smoothly, and dynamically adjusts the cropping on the image for the widest possible view whilst still maintaining the maximum stability possible.

Power-wise, the HERO11 now comes with the Enduro battery as standard. In addition, GoPro says that it has optimised the power usage in the camera's firmware, with reduced power usage on idle.

The company offers two modes in the camera, Highest Quality and Extended Battery. In Extended Battery mode, only those shooting modes that are the most power frugal are available to you. There are also two modes depending on how advanced a user you are. Easy Controls is for those technophobes who wish to get on with capturing the action, whilst Pro Controls gives users access to the whole gamut of settings and shooting options.

Other additions to the HERO11 include new night shooting and timelapse modes for capturing headlight streaking and light painting; 5.3 K/60 and 4K/120 are also now possible in SuperView mode.

The HERO11 Mini is a second significant addition to the HERO line of cameras. For those who lamented the end of the HERO Session, the HERO11 Mini fits the bill. It has been designed to be optimised for helmet mounting and is roughly half the width of the HERO11 Black.

The 11 Mini has a fixed battery, based on the company's Enduro system, but has a replaceable MiniSD card slot. Although the Mini lacks an LCD for framing (you can still use the app for this), it features dual mounting fingers. One set of these is on the camera's base, as per all other HEROs, and the second set is on the rear. This type of arrangement will make mounting the camera a lot more flexible. 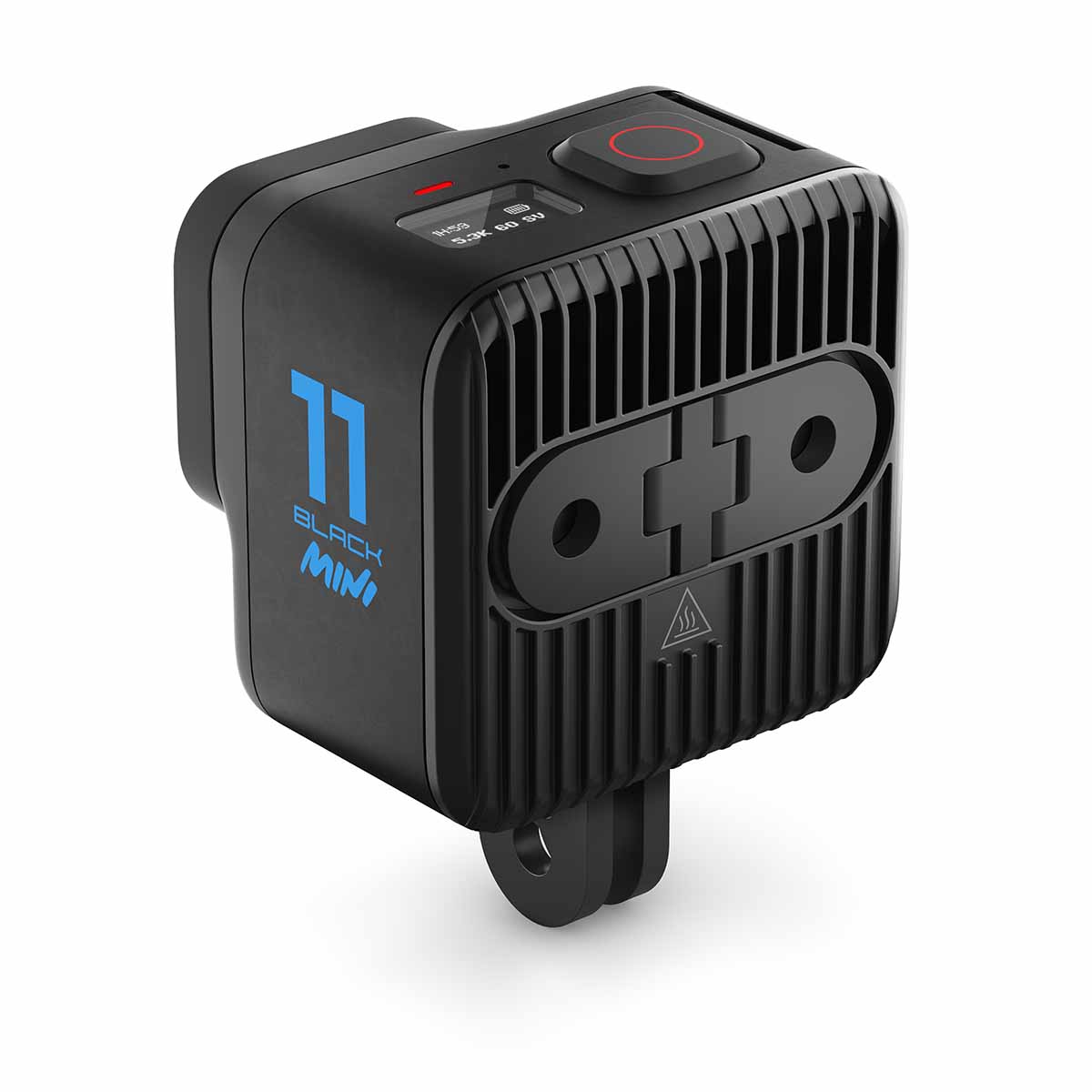 The HERO11 Mini has a fixed battery, but because it is only ever on when it is recording, due to its single button operation, surprisingly long usage can be had from it if you are selective about your filming. The 11 Mini features the same GP2 processor as the 11 Black, and it also features the same resolutions and shooting modes. However, some options have been omitted, such as HindSight, which gives you cache pre-recording.

One interesting facet of the HERO11 Mini is that the rear of the camera appears to be designed as a heat sink to help with thermal dissipation.

The HERO11 Black and the 11 Mini can auto-upload footage to the cloud when plugged into a power charger and the Quik app has been updated to enable auto-uploading to the cloud with a GoPro subscription. Your footage, should you want it to, will then be auto-edited on GoPro's servers and sent back to you with a notification that your edit is ready.

In the near future, the Quik app will feature manual editing from your cloud-based uploads and the ability to choose your digital lens options after shooting from the 8x7 mode.

There is often lots of speculation about what any new GoPro will bring to the table. For some, the addition of 10-bit colour will be the deal clincher when it comes to purchasing decisions, and it has to be said that many of the new shooting modes serve a practical purpose. The HERO11 Mini would also appear to be a worthwhile addition to the lineup, particularly given complaints about the size and weight of the HERO10 for head mounting. Although it only has a fixed battery, it does have removable storage and doesn't comprise frame rates or resolution like the Session once did.

Look out for our review dropping very soon. But, to whet your appetite, below are a few screen grabs. First, the ungraded shot, taken in Flat (log) picture profile mode with an EV of -1.5 to protect the highlights, followed by a 300% zoom in on an extreme grade on a HERO10 with 8-bit recording, and then the HERO11 in 10-bit mode to compare. The tonal difference is clear to see. 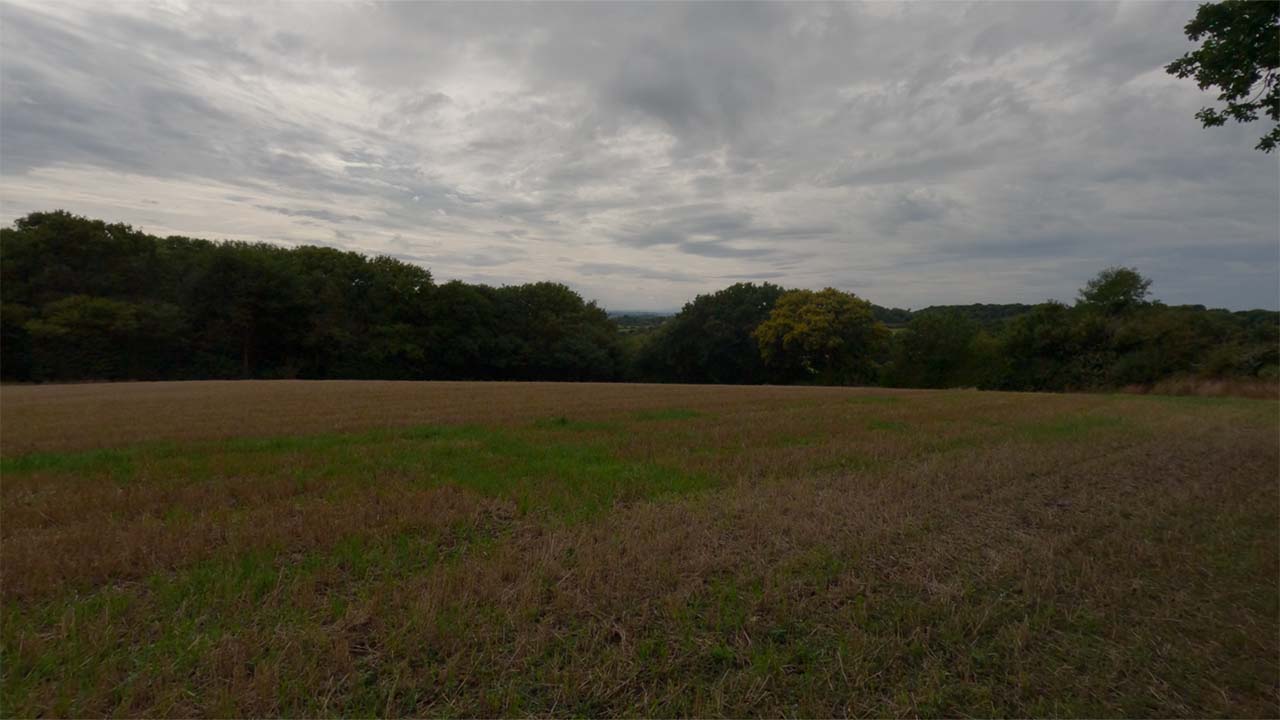 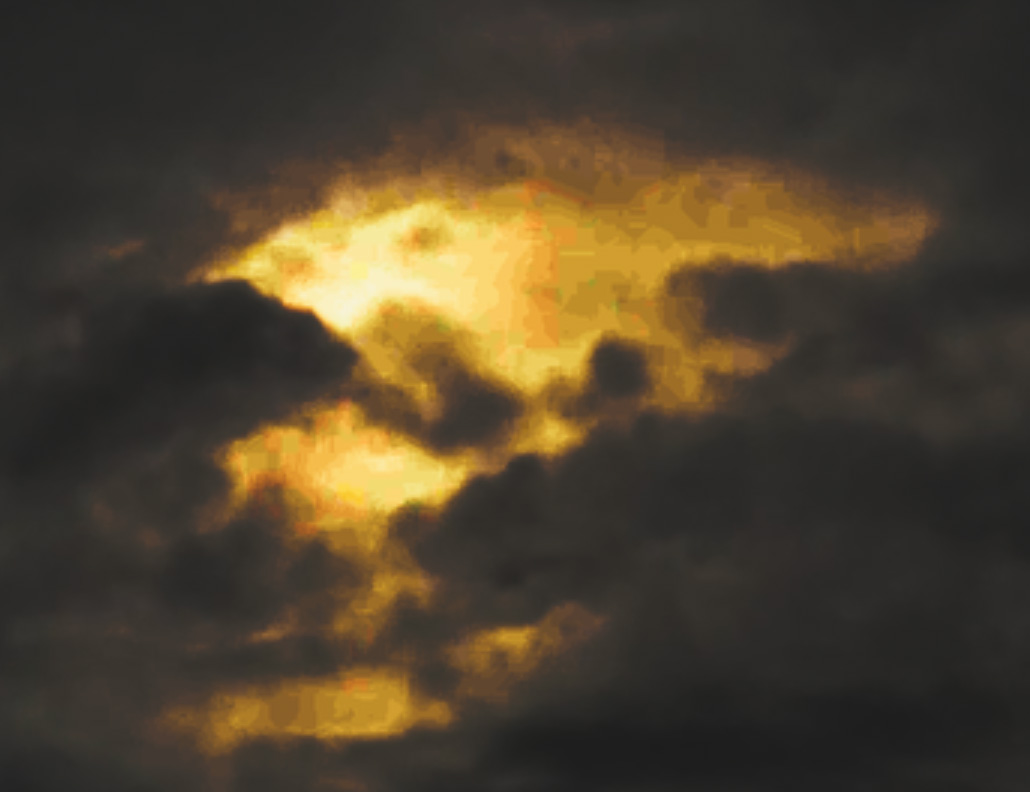 The HERO10 in 8-bit mode after an extreme grade (300% zoom). Note the posterisation.

The HERO11 in 10-bit mode after the same extremely pushed grade (300% zoom). The additional tonal information is clear to see.