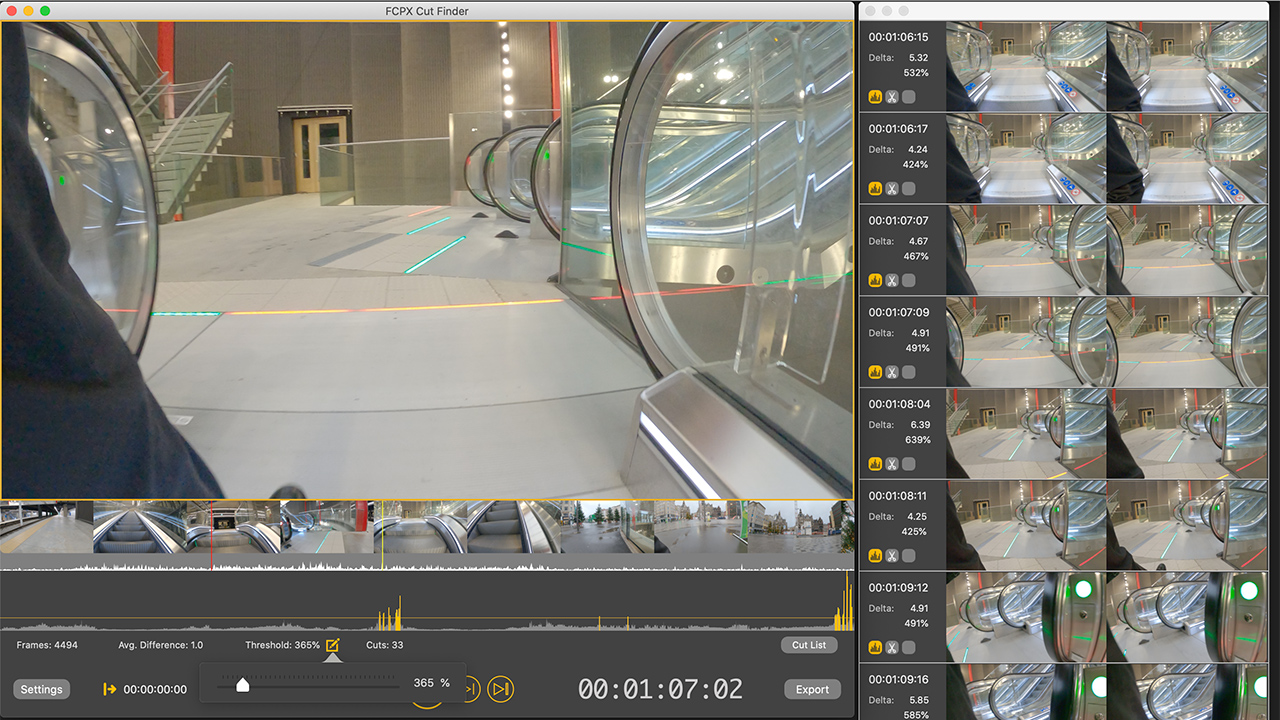 Alex Raccuglia, the developer of apps like FCPX Diet and AutoDuck has released a new app that finds cuts in footage and either marks them or exports them as FCPX cuts. Appropriately called FCPX Cut Finder, the app costs no more than some 10 Euros and it does a fine job of analysing your video and finding those cuts, saving a lot of time in the process.

FCPX Cut Finder works with a drag-and-drop approach. You drag any movie file to the large dropzone in the app and hit the Analyze button. As soon as the movie has been analysed, the cut points are identified and listed in a Cut list that allows you to view the edits and decide, cut by cut, if it’s really a cut — a discontinuity in the video — or something else. When you’ve finished, you press the Export button to have FCPX Cut Finder generate an FCPXML file that will show the cuts on the Final Cut Pro X timeline.

Although FCPX Cut Finder uses a traditional algorithm that identifies the differences between two contiguous frames, its results are better than other systems. That is because FCPX Cut Finder analyses the result a second time, using artificial intelligence based on a Machine Learning model that interprets what it “sees” in each frame. This seems to work very well from what I saw during my tests. It’s also incredibly simple and user-friendly, although some of the app’s power stays under the radar if you haven’t first gone through Alex’s instruction video or read the web page carefully.

For example, you can quickly reduce or increase the number of cuts by clicking the Threshold icon and dragging the corresponding slider in either direction. The app has In/Out settings to reduce the analysis over time. If you don’t want to analyse the entire frame, you can draw a rectangle on the frame and FCPX Cut Finder will only analyse what’s inside.

The latter is handy if you want to create markers or Final Cut Pro X cuts in a recording of a presentation and end up only with cuts where the presenter changes slides. However, I found this feature to also be effective when you have a recording from a driving car through an empty city where FCPX Cut Finder would find cuts at every traffic light stop, whereas the only useful cuts were where the car exited from an underground parking lot, and entered and subsequently drove out of a tunnel. Analysing only the light hitting and reflections on the bonnet was far more efficient in that use case.

The app has yet other niceties on offer. For example, if you find a scene change in your cut list that is below the Threshold setting, you can still force the item to be added to the exported cut list by clicking the Scissors icon. If it is above the threshold, but you don’t want it exported, you just click on the empty icon and it won’t appear in the XML file.

There were a few things I was less happy with, though. When you buy FCPX Cut Finder, you get a download link that does not include the system libraries and stuff needed to make the app actually work. That’s a separate free download but it’s not advertised on the web page as far as I could see — a bit frustrating because without those system accessories the app will crash on dragging a movie instantly.

Another thing is that you can’t yet re-analyse your footage. The good news is that Alex releases updates faster than God can install them. A perpetual licence for FCPX Cut Finder is available on the FCPX Cut Finder website for the impressive sum of 9.99 Euros. At the time of writing, there was an introductory offer of 4.99 Euros. There is a trial period of seven days.