We were tempted to make yet another Top Gun reference. Instead, if you feel the need for speed, we take a look at Blackmagic Design's new Speed Editor control for DaVinci Resolve 17.

I have to admit in the past I haven’t used the cut page very often in Resolve, although it’s become more interesting with version 17, especially when combined with the Speed Editor. There may come a time where most of my editing is done through this way - with occasional work in the edit page, but I’m not comfortable enough with it yet. I liken it to editing in a shirt that’s a couple of sizes too small – just a bit too restrictive.

With Resolve 17 beta there are lots of new features in the cut page. This includes the ability to enlarge the waveform view to assist trimming. When using the audio trim button the lower timeline filmstrip is replaced by the larger waveform.

Those editing for social media get the ability to reframe for non native output. This uses the DaVinci neural engine to track subjects and reframe on the fly. You can easily take a 16:9 file and generate output for Instagram or other vertical or square platforms. This isn’t limited to people since you can always select a general area of interest to keep in the frame.

There’s a new live preview function for effects as well. The ability to see how an effect is going to render in your material before actually applying it is a very welcome addition, this also works in the edit page. 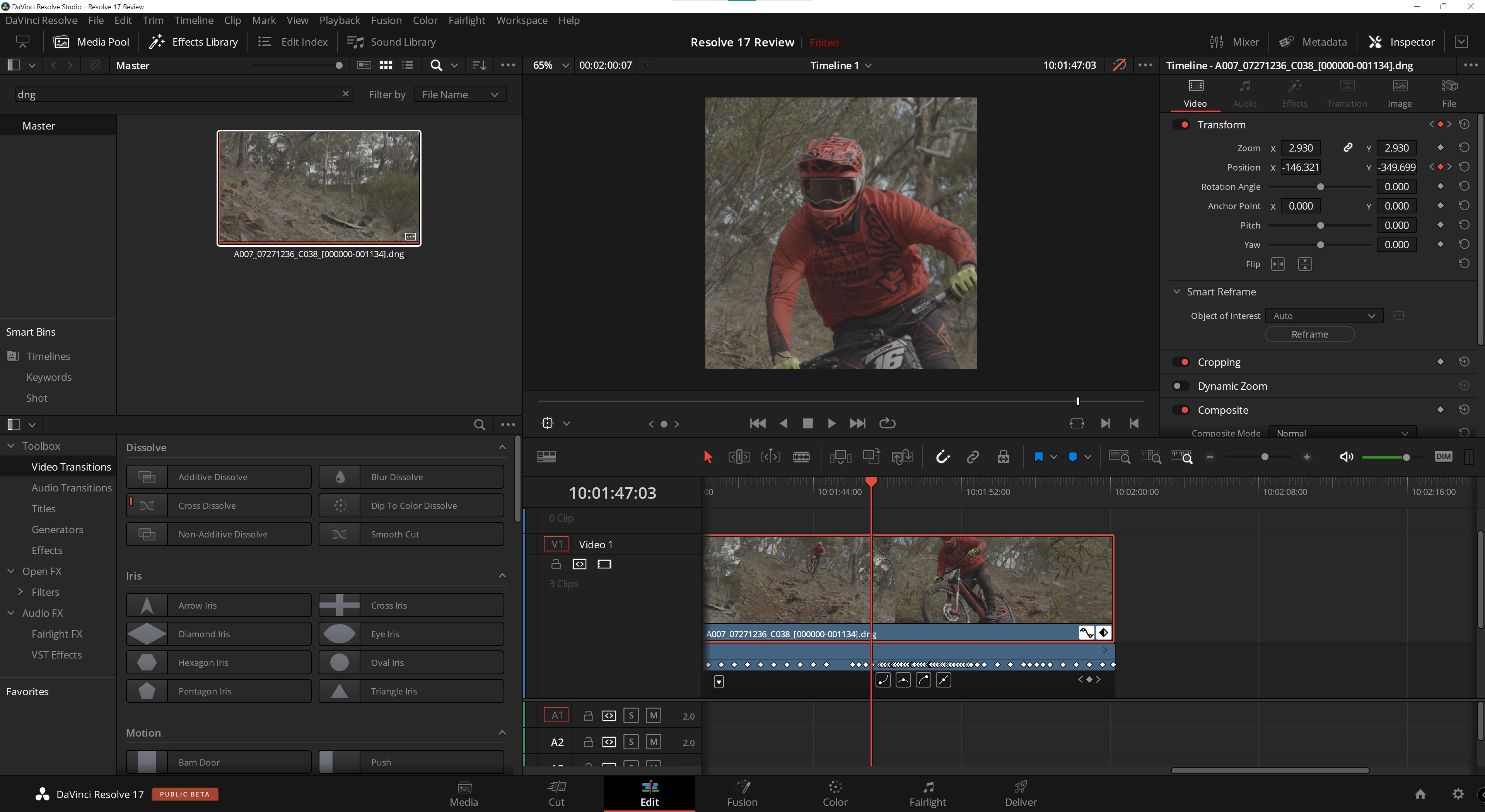 As for the Speed Editor- it’s quite a heavy unit although with a mainly plastic outer shell construction. This does mean that the included Bluetooth connection works well but there is no included dongle in the box – not an issue for most people, and I’m happy to say it works fine with a Nano TP-Link fit and forget solution on my desktop.

It does rely on your OS reporting the battery status as there is no indicator on the device itself, although it does seem manage power very well. After a full charge and couple of days of testing, battery life is now at 90 %. Pairing is also instigated by the host OS as is standard with this sort of device these days. The status lights, and hence functionality, are only active when Resolve starts up and finds the Speed editor either over USB or bluetooth.

As for it’s usefulness? it does offer some basic functions in Fairlight but it’s real home is in the Cut page with some of the additional functions also available in the Edit workspace.

Using the cut page for multicam work is probably where it’s real strength lies - with dedicated keys for up to 9 cameras you can even cut ‘as live’. There’s also a supported workflow which means that you can assemble whilst playing back full screen with the speed editor -  never having to look at the time line. This is quite a freeing experience,  and it takes me back to my days cutting on U-Matic. 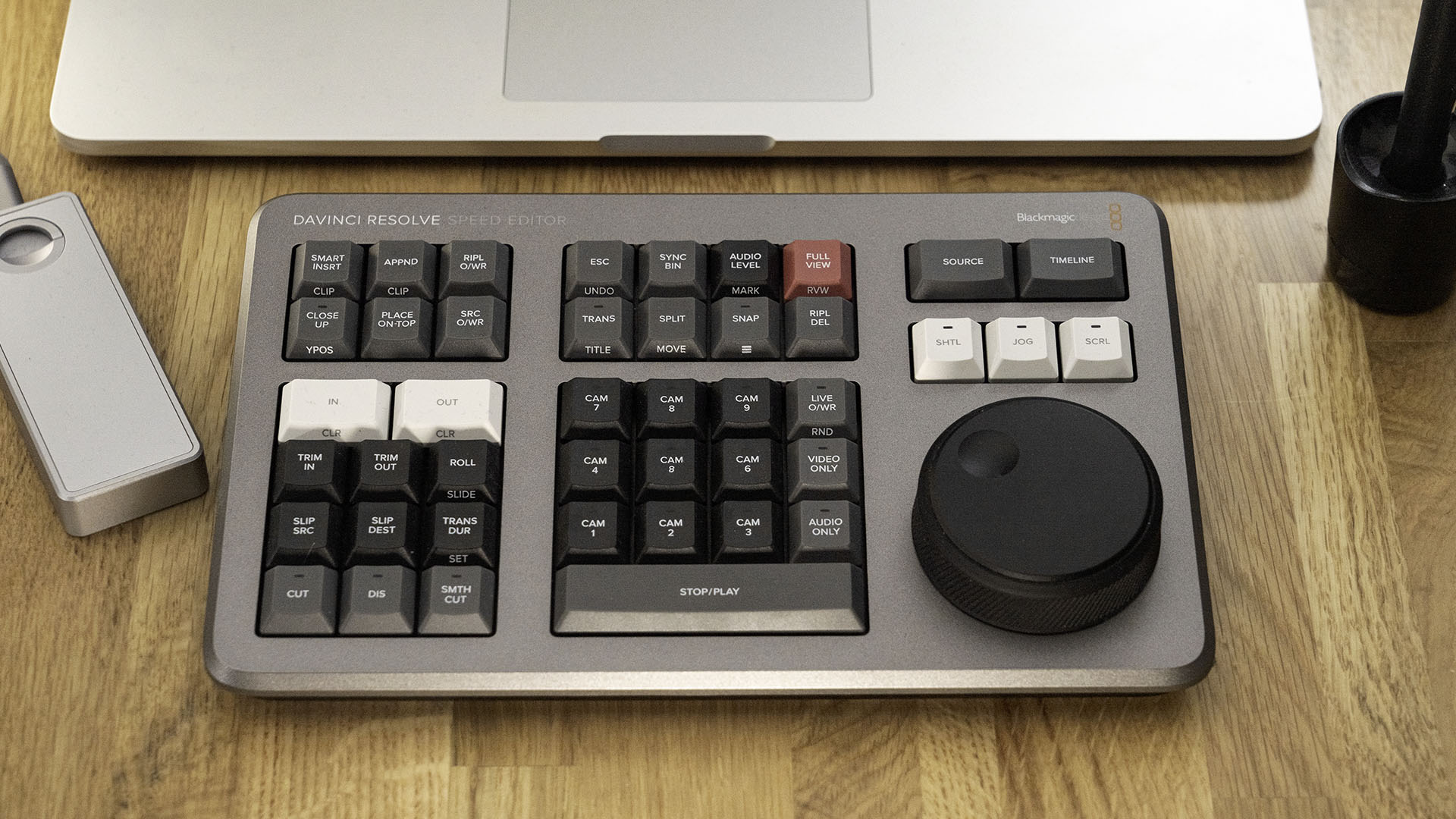 In use I found it very responsive, it’s nice the have a control wheel with weight but little friction, however it doesn’t come with a clutch like the Editor’s Keyboard, its more expensive sibling. I think it strikes the right balance at this price point, £282 - or at time of writing free with the purchase of Resolve Studio. If I was being very picky there is also some trade off with the quality of the key caps themselves, they lack a bit of finesse in their construction and there are no location marks on any of the keys, maybe there’s some room here for some 3rd party upgrades?

With a lot of dedicated shortcut buttons, some which enable double duty when held (like the split/move function) or double tapped (like the mark/audio level key) there’s a lot to like. You can now easily resize the viewer window and hence timeline height when using holding down the snap key and turning the wheel. I like the large in and out keys and the double tap function to clear the associated points, but there are some keys which are in the wrong position for me but that’s quite a personal thing.

I did find that the main jog and scroll functions didn’t quite work in the way I would have expected. When having either of them selected and playing back you can’t just grasp the wheel and turn it to enable those modes, you have you tap the stop button first although this isn’t true for shuttle mode.

It’s great to see a lower end version of the Editor’s Keyboard which opens up a whole new user base and the most important thing?...it does have an undo key!