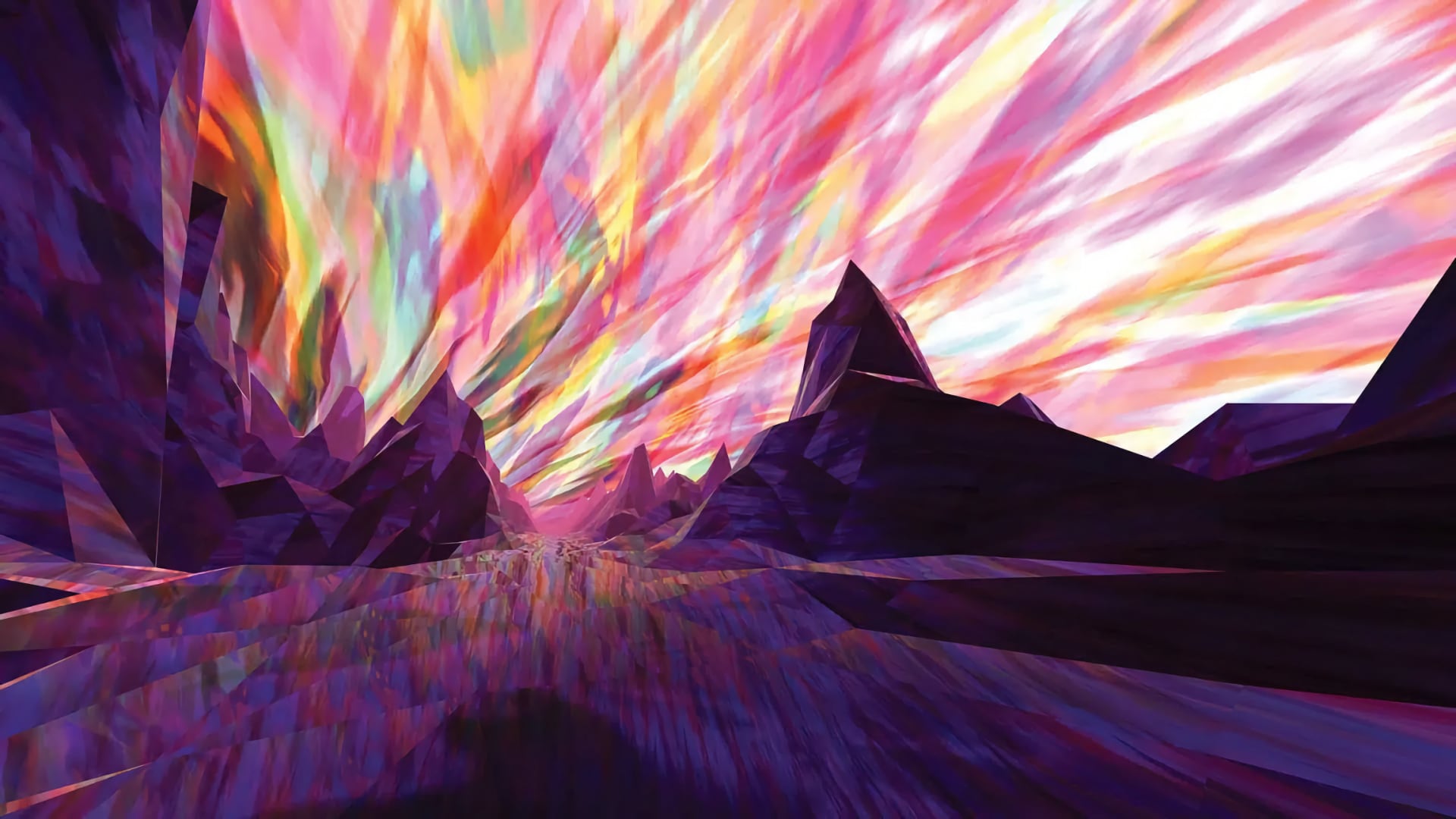 Digital artist and educator Kate Parsons on the interface between art and technology, the future of interactive technology, and the importance of GPU power.

We first came across Digital Art Professor Kate Parsons in a NVIDIA blog post looking at her work with FLOAT, and were intrigued enough by what she was up to that when NVIDIA asked us if we’d like to interview her, we said ‘yes’.

Hello there. Please introduce yourself.

I’m Kate Parsons, and I’m a digital artist and educator. I’m an Assistant Professor of Digital Art at Pepperdine University, and also split time between California and Montana. I studied undergrad at Montana State University, and then got my Master of Arts in Digital Art and Video from CSU-Northridge and my MFA from UCLA’s Media Arts program. Ben Vance, my partner at FLOAT (and also my husband) studied Art and Computer Science at Iowa State University, earning a BFA and BS, respectively.

FLOAT has worked on projects and received project support from folks like Amazon Studios, Google, Git Hub, Wevr, Within and Tony Hawk. We’ve worked with artists such as Ian Cheng and Petra Cortright and were part of Marina Abramović, Jeff Koons and Olafur Eliasson’s VR art gallery, Acute Art. We’ve created a futuristic AR experience for a high end mall here in LA for United Nude, “the leader in architectural footwear” and developed the concept of “digital set dressing” for real spaces. We’ve also shown our work at a charity event, and we were very happy to chat with Ron Howard who had nice things to say about our interactive VR art!

I started out working in advertising, as I had a graphic design degree to put to good use. My first job was an illustrator for Outside Bozeman, and after school I worked as a designer at Banik Communications up in Montana. Over the years I’ve had the opportunity to freelance, working on video and design for clients like filmmaker Mark Pellington’s Aston Martin campaign.

Ben worked for many years at EA on projects like Medal of Honor and an unreleased Steven Speilberg project. He’s been in the Indie Game space for about 12 years, working on arcade strategy game Skulls of the Shogun, exploring deep space and VR with Irrational Exuberance, and co-founding LA’s Glitch City indie collective. He also contributed literal magic and spell casting design to the Harry Potter VR experiences at the Harry Potter store in New York City.

What made you interested in the interface between art and technology?

Both of us came of age during the early internet years, so I think we’ve always been drawn to interactivity and digital tools and exploring what can be done with them. The possibilities are unlimited and we really enjoy experimenting with new processes. We hope to broaden the expressive range and bring more people into the medium and change the way we relate to technology.

How important is it for you as an artist to be able to work in real-time?

It’s very important, especially if you like to work iteratively and quickly–we often prototype things fairly fast, so it’s necessary. We rely on our NVIDIA GPUs and the accelerations they provide to make this possible.

Is the hype around the metaverse justified?

We’ve been around long enough to see hype cycles come and go, and there is certainly a lot of hype here! Usually the hype dies out and the people who are passionate and legit continue to work away behind the scenes. The hype is usually an indicator of something but it often doesn’t arrive at the time or in the shape people expect. We’ve got community bubbles of “metaverse-y” things right now: Fortnite, Roblox, VRChat, even Discord. There are glimpses of the future here, yet it will almost surely be something else.

So in some ways it's nothing new. It describes things we already have. The change is that the internet is expanding in different ways, growing, morphing, affecting more people, and it’s becoming front and center. We don’t “go online” anymore, we’re always on, and now, in these communities, we’re “in”. We’re normalising the idea of hanging out in digital places.

Having spent a tremendous amount of time working in VR and AR, we see the potential, we’ve seen players come away speechless. We’re truly excited by the transformative possibilities and how these things might help us more deeply connect with others and ourselves, regardless of interface.

What do we need to make it a reality from this point in time?

The idea of a fundamentally decentralised internet has an attractive quality to it —it has the buzz and excitement of the early internet, which felt incredibly different than it has for years. It was wild. There are a lot of challenges to get there, but there are a lot of passionate folks working on it. There are some core interoperability issues - but standards are being developed and it's exciting to see alignment in the industry.

For instance, I am interested in looking at NVIDIA Omniverse, especially it’s USD standardisation. We currently have to jump through a lot of little hoops just to collaborate effectively, so having a more unified platform for 3D design collaboration and world simulation would be really helpful.

We also need more processing power to transition fluidly and quickly between different experiences and their underlying software. This could all happen in 5-10 years and it will be much stranger, more potent, and more varied than popular media can possibly show. For better and for worse!

What kind of possibilities do you see for the future of interactive technology and art?

We did a talk on this subject at the Unity Vision Summit a few years ago. There are so many possibilities! We came up with what-if combinations that we’d love to see. These include but are not limited to:

Part of this exploration into the future revealed different ways of thinking about it. In some ways, for example, VR can be a simulation and preservation of almost any existing art form. From a historical perspective that is really exciting, there are so many works that are temporary, fragile, process-based, etc… but could be captured and shared widely.

When you consider that VR itself gives you access to a tech platform, just for it to work, and that having a microphone and motion tracking simply available everywhere as input, for example, then you can see how the art landscape could become very expansive.

How important is the GPU when you’re speccing out a new rig? Where does it fall nowadays in the list of CPU, monitor, storage etc?

I look at GPU and storage first, but CPU is also really important to me because I do a lot of video editing.  I work across several PC builds powered by RTX GPUs along with NVIDIA Studio creative applications that are AI and GPU accelerated, which are also important considerations when building an efficient rig.

Where are the current limits? What are you doing when you say ‘Uh oh, need more power…’?

Typically it’s when we’re working on something bleeding edge. We worked on some early mixed reality concepts using the Vive Pro. VR alone was fine, but adding an extra layer of live video processing brought our machine to its knees and can only really be handled by our NVIDIA RTX GPUs. More recently, it has been experimenting with Unreal 5, the matrix demo, and meta humans. It’s always new tech that barely fits on current hardware - and while developing you’ve got the extra overhead of the editor like Unity or Unreal on top of it. After a year or two, hardware inevitably improves and platforms optimise their software, so typically we don’t have to stay in that state for too long. But some projects have to be shipped in that painful window when it all just barely works. It’s important for us to have the best performance and reliability, which is why we tend to use creative applications that are supported by NVIDIA Studio. Regular driver updates keep everything performing at its best

Take us forward a decade. Where do you think we’ll be in terms of technology and the way we interact with it?

In 10 years, technology will be both broader and deeper with stranger pockets of activity. AR will be much more integrated to the real world, but that also means it will be messy and complicated.  There will be adjustment and regulation, but lots of intuitive creativity and collaborative creations. Hopefully, it empowers us far beyond the problems of always-on distraction.

VR will continue to deepen, and in 10 years should continue to be a fascinating space to experiment in. It has the advantage of the blank slate - designing blue sky worlds will be easier as they can ignore the real world and all it's very unpredictable surprises and situations.

We will really start feeling the effects of technology being deeply integrated with our every day moments in a decade. Some industries will be extremely integrated with immersive tech, especially those that rely on visualization and spatial intuition. We will probably be streaming high fidelity visuals from the cloud that react to us in real time, and will be socializing with friends on the fly throughout varied games and digital hangout spaces. We'll see more combinations we haven't seen before, real-world community events driven by online-connected communities, new kinds of digital sports, art exhibitions, and everything in between.