Creamsource Vortex8: This could redefine what an LED light can be 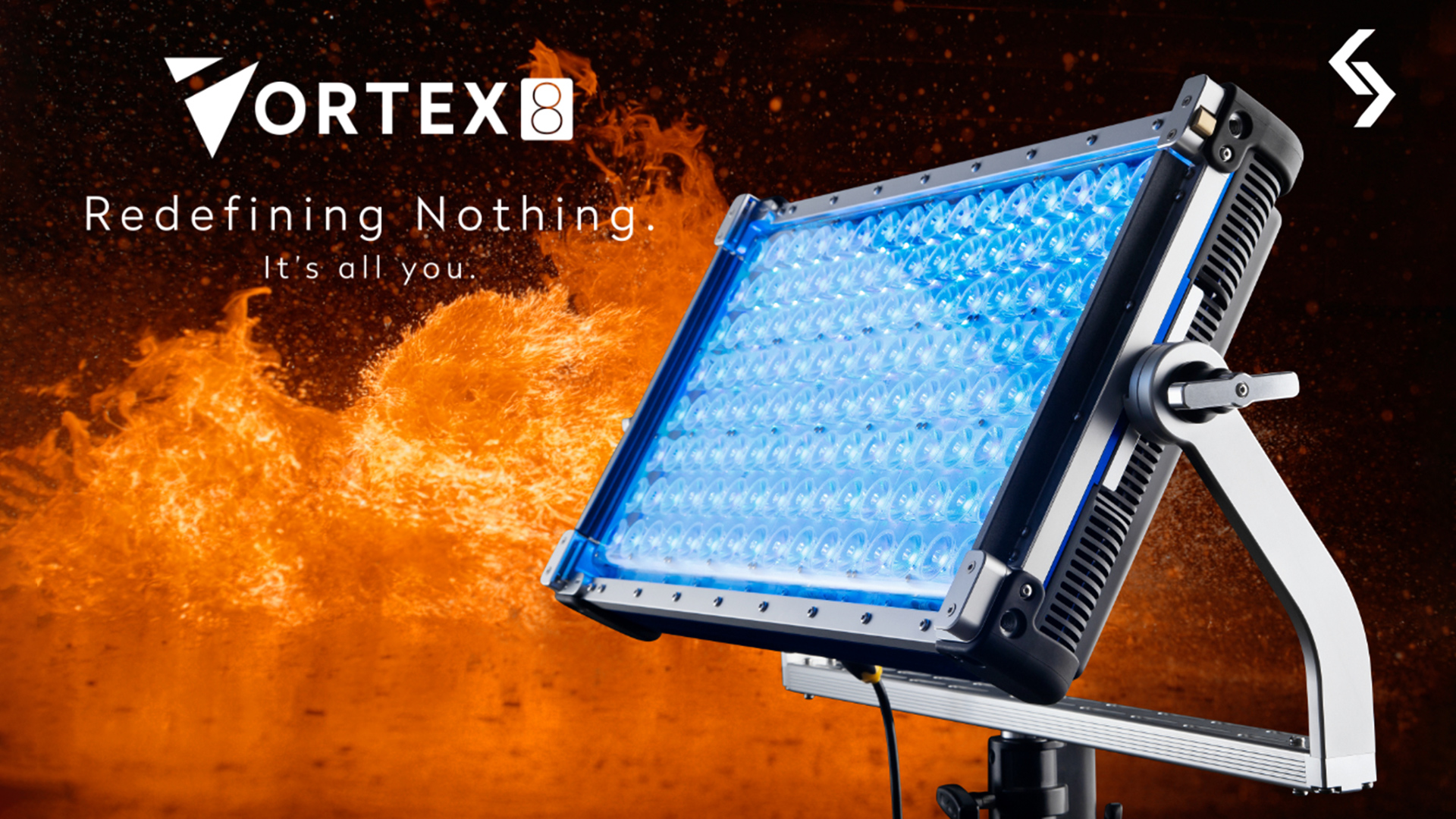 It takes quite a bit for the world to sit up and take notice of a new LED lighting panel, but the newly-announced Creamsource Vortex8 has a spec sheet stacked with numbers that give it the potential to unseat some rather well-known competition.

At this point, we’re working from the spec sheet and a one-to-one chat with the company’s Tama Berkeljon, direct from the factory, but we’ll have a look at one when we can.

In the meantime, it’s a two by one LED panel with some features in common with Creamsource’s back catalogue. Particularly, it’s based on an array of little individual reflectors which create the sort of projecting light that takes serious amounts of space to create without LEDs. That’s not new – Litepanels have had individual optics on one scale or another more or less since day one of LED lighting - but it’s a new idea in this sort of format.

Watch the incredible launch film for the new lighting below. We'll be taking a closer look at this in the coming days.

The Creamsource Vortex8 looks almost like an array of the company’s Micro Colour devices set up to create a two-by-one foot active area. That gives it a lot more flexibility than more traditional, fully-diffused panels. It’s easy to diffuse a collimated source, but much harder to collimate a diffused on, and there’s a diffused one. There’s a slide-in panel if you do want full diffusion.

So it isn’t quite a SkyPanel in design, although Creamsource’s new baby is very clearly aimed squarely at the silver and blue incumbent. On paper at least, it exceeds Arri’s design handily. It’s roughly the same sort of size, but lighter – the SkyPanel head is 28lb, while the Creamsource Vortex8 is 30, but the power supply on the Vortex8 is entirely internal, making for a much more straightforward and compact overall arrangement.

That’s particularly eye-opening considering the Vortex8 is somewhere near one and a half times the power of the competition. The 650-watt rating will naturally vary as you take advantage of the colour mixing options, but that’s a lot of power, especially given the narrow 20-degree beam angle of the un-diffused device. That’s punchy. 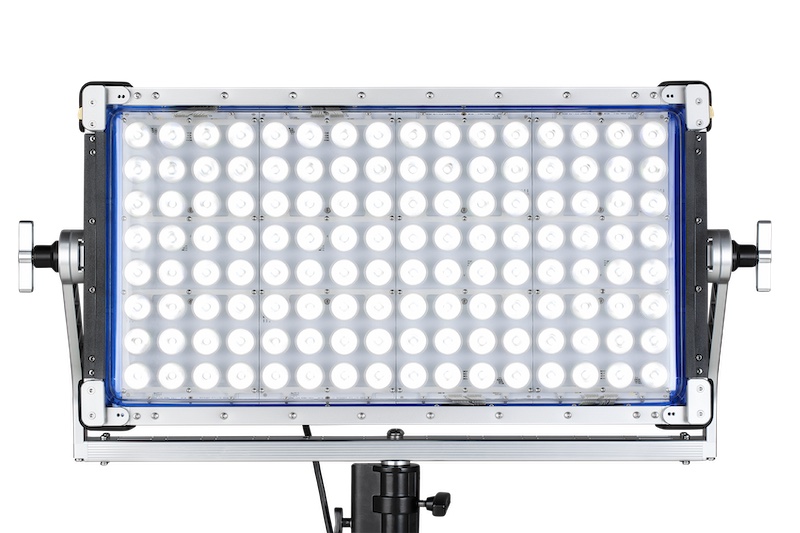 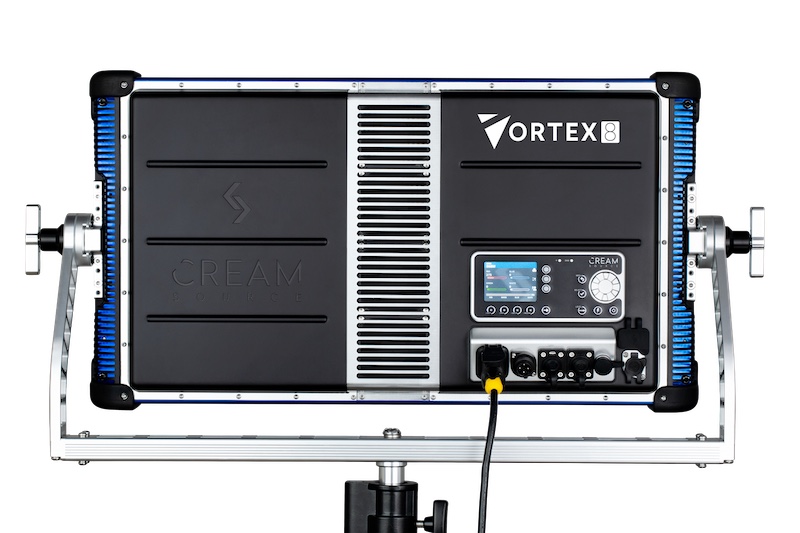 The size and weight is particularly impressive in the context of the fact that the thing is entirely waterproof, and not just splashproof; it’s IP65 (implying water directed at any angle from a 1/4” nozzle at a pressure of 4.4psi should have no ill effect; that’s a small hosepipe). The party trick is to point the thing downwards and pour water directly into the air vents. The Vortex8 seems to consider this nothing more than an improved cooling opportunity, so even the most severe rainstorm should be no problem whatsoever.

There are sundry other features – it seems to support more or less every connectivity protocol that’s in use to control more or less any kind of lighting imaginable, CIE xy colour selection, and there’s a synchronisation option to avoid torn frames with stroboscopic effects on rolling-shutter cameras, a problem that’s strangely ignored by almost the whole market. 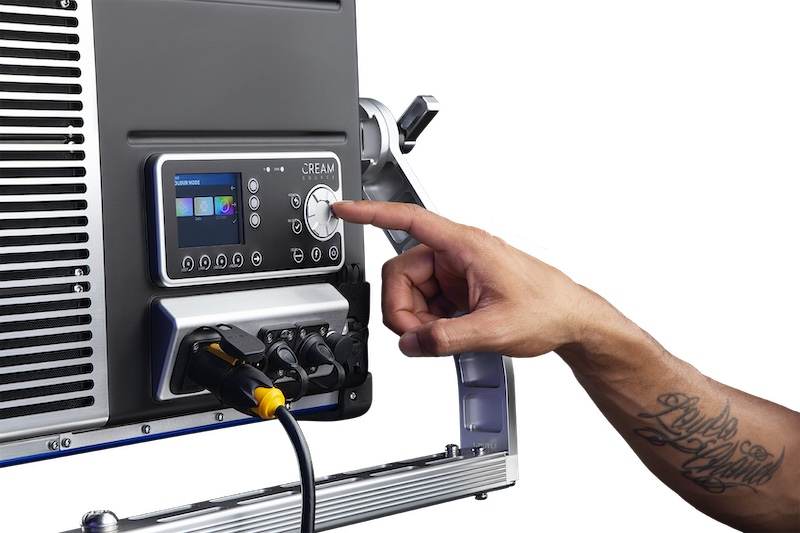 Perhaps the most encouraging thing about Creamsource’s approach, though, is the knowledge that cost per watt is becoming a factor in LED lighting. More than one director of photography has complained that the cost of LED lighting is sometimes enough to offset its efficiency benefits. At $7.69 per watt, according to the company’s numbers, the Vortex8 is under two thirds the cost of the competition, but somehow manages to do this without giving any impression of being cheap. LED has been too expensive for a long time.

OK, it’s a cheap shot to compare Arri, whose design is more than five years old, and there’s much sterner opposition from Rosco DMG and Cineo, who compete for the same sort of work - albeit in very different ways. Still, with the glittering specification and the welcome eye on economics,  Creamsource’s contender is nicely placed to do well.