Sale of the Century? Red slashes prices across the board 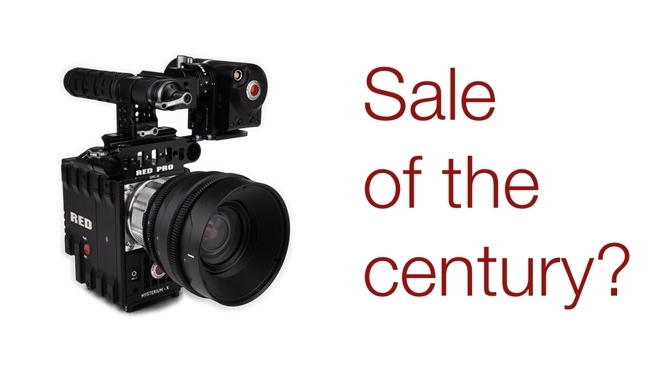 Sale of the century?

The battle for cheaper 4K+ acquisition is heating up. Just a few days ago, Sony announced the F5 and the F55, and a constellation of accessories that comprise their new 4K ecosystem. Not to be outdone, RED, perhaps in a ploy to steal some of Sony’s thunder, made its own announcement, via CEO Jim Jannard’s post on the REDuser forum:

As I said before, everything in the electronics world changes… usually for the better, cheaper and faster. EPIC and Scarlet just did. Right now.
We have built an incredibly efficient factory in Irvine, California and over time learned how to make EPICs in quantity, lowered our assembly costs, found better suppliers and fully paid off our NRE. When we assembled the 1st EPIC camera in Stage 6 at RED Studios Hollywood it took our team 12 hours. It took two more days to de-bug. Today we can assemble an EPIC in 13 minutes and 95+% need no re-work after diagnostics and testing. It is a testament to our manufacturing team and supply chain teams.
Since our costs are now significantly lower we are re-pricing our cameras as of now.
For those of you that purchased a new Scarlet or EPIC brain on or after Oct. 1st 2012, the next time you order accessories from RED you will receive a discount to use towards that purchase. $1000 for Scarlet and $4000 for EPIC. Talk to your Bomb Squad representative when you are ready to use this discount.
Now… here is the new pricing:
5K EPIC-X Brain- $19,000
5K EPIC-X Monochrome Brain- $20,000
5K EPIC-M Brain- $24,000
5K/4K Scarlet Brain- $7,950
4.5K RED ONE M-X Battle Tested- $4000 (includes CF or SSD recording module). The RED ONE is End of Life. Battle tested is all that will be available from here on out.
Due to high anticipated volumes, plan on extended response and processing times.
Dragon sensor upgrade is not included for any EPIC system purchased at the new pricing going forward.
Pricing is being updated on  www.red.com as I post this.

To recap, here are the price reductions (previous pricing in parentheses):

These massive price cuts underscore how competitive the 4K+ market has become. It’s also worth noting again that the pioneering 4K camera, RED ONE, has been End of Life’d. So, kindly pay your respects to the ONE that started it all.