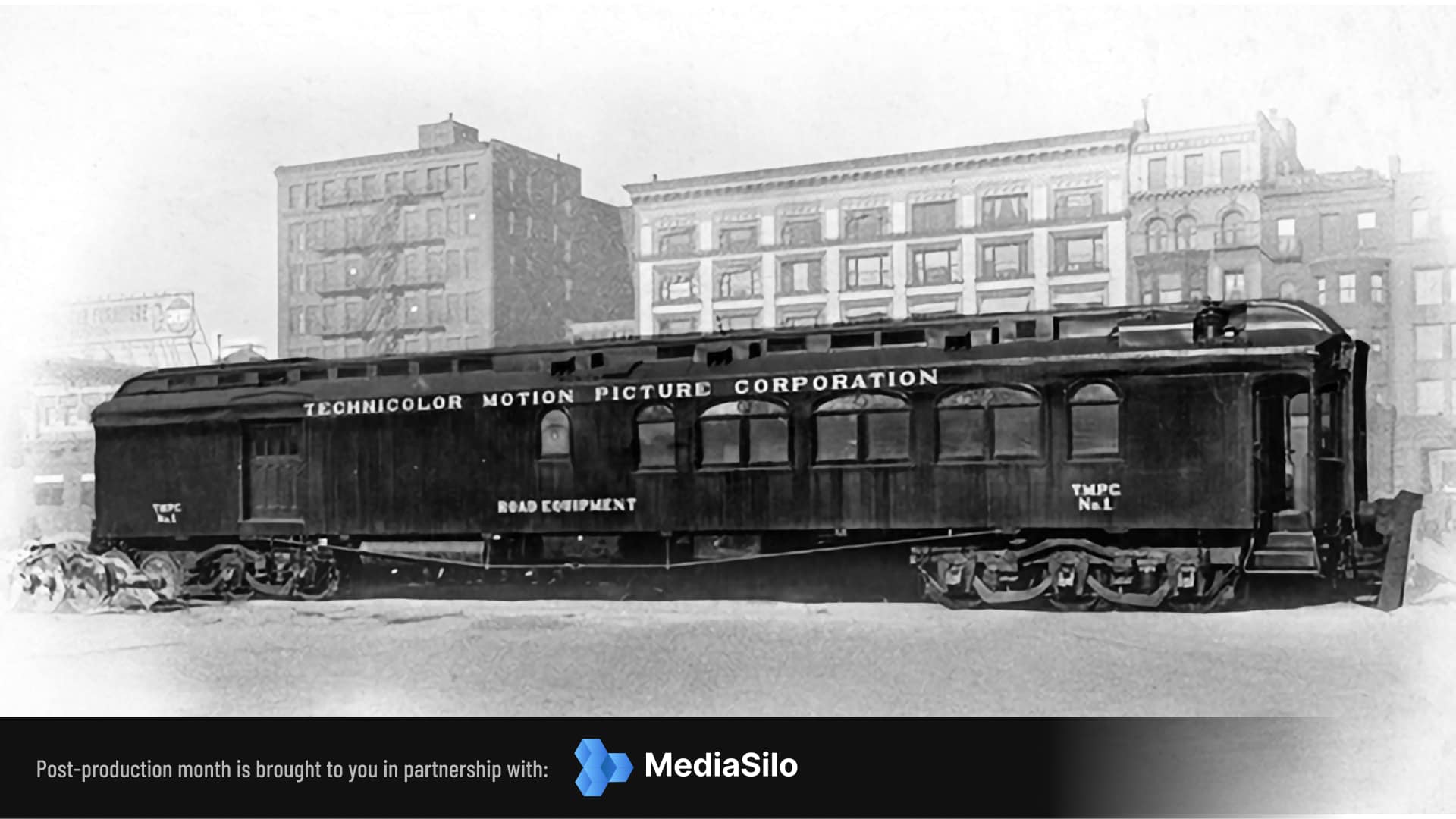 3 minute read
Technicolor's mobile lab, designed to be parked in a siding near Hollywood studios in the 1920s. Pic: Smithsonian

As the video village expands to become a video town, what a 100 year-old railcar tells us about the distinction between what happens on set and what happens in post.

A long time ago, many of the things which would eventually become core to photochemical post production could be found in a railway siding near the production office. Technicolor’s famous mobile lab of the early 1920s was built into a series of railway cars apparently with the idea that sheer proximity helped, somehow. Happily, sanity (and stabler photochemistry) soon prevailed, and by the time monopack colour motion picture photography had become mainstream, the industry had invented the proto-Deliveroo model, shipping film to a bricks-and-mortar lab, which remained normal until recently.

That separation between production and post is something the film industry clearly valued. Given the complexity of a film set, it’s perhaps something of a surprise that aspects of post have ever leaked onto sound stages at all. A gruesome example of this was Technicolor’s imposition of a minder onto productions using its three-strip Process 4. Probably the most famous of them was Natalie Kalmus, co-founder of the Technicolor Motion Picture Corporation with her ex-husband, engineer Herbert T Calms. Historical accounts suggests that Kalmus was a prickly collaborator whose input was not always charitably received.

To the relief of everyone (presumably except Kalmus), advancements in technology eventually made the role obsolete. For the remainder of the twentieth century, production and post were mostly well-separated, and one of the core requirements for any replacement of film was that it must not add expense or complication to on-set procedure.

So, that went well, then…

The relationship between cinematographers and digital imaging technicians was rarely at the Kalmus level, if only because early DITs were often seen as replacements for film loaders. A Technicolor consultant had clout. Loaders were junior, and therefore so were DITs. In the earliest years – the mid-2000s, say – there was even confusion around whether a DIT was part of the camera or editorial departments, or who a DIT should report to. As with many hazily-defined roles, the answers, respectively, often turned out to be “everybody,” but DITs were ignorable until things went wrong.

Regardless, we’ve established that there’s nothing new in a camera department bringing in elements of post. Soon, though, the concept of the modern DIT will have lasted almost as long as Kalmus’ two-decade incumbency at Technicolor, and there’s no sign of anyone becoming anything like as impatient – quite the opposite. While early DITs were sometimes decried as harbingers of the end of a beloved predecessor technology, many are now trusted confidantes to cinematographers in much the same way a laboratory contact might once have been.

The difference is that lab contacts worked at the lab, which was not on set, and didn’t complicate the shooting day. Neither did dailies grading, nor transfer and transcoding operations. The argument is not a new one, but it remains true that some of the greatest cinematic moments of all time were created under circumstances where nobody but the camera operator could even see the frame, let alone play it back, let alone make complex colour adjustments and send transcoded results to someone several time zones over for realtime feedback.

As the video village has expanded to become a modest video town (then upgraded to a video city with its own branch of Starbucks), more and more post has sidled onto set. That’s a complicated, unpredictable, ferociously expensive place to do anything which could be done elsewhere or later. If all this sounds like a polemic against DITting, it’s not. The desire to preview and verify things is perfectly valid, although the fact that it wasn’t always possible belies the idea it’s essential. The time it becomes a problem is when it becomes received knowledge that every production must have an advanced live grading workflow, multiple transcodes, on-set LTO backups, cloud editing on the fly and a show LUT for every hour of the day.

That blurs the lines between production and post in a way that probably doesn’t help anyone. The approach of many modern facilities companies is to move absolutely as much of that as possible to a digital lab, run offsite, on the traditional model, which is probably more sensible.

Natalie Kalmus might have had an interesting opinion on this. Records suggest she was a proponent of the cautious use of colour, with friction often building between a director’s bolder choices (possibly motivated by the producer’s interest in seeing where the money went), and Kalmus’ preference for a more restrained palette. There’s an uncomfortable parallel here with stereo 3D, with directors notoriously flirting with that kind of unsubtle approach. What it didn’t do, on the other hand, was drag half the lab onto set.

Technicolor had given up on its rail-mobile approach by 1920. The idea that it was a bit excessive to follow a production around with an entire train might have something to tell us about workflows a hundred years later.