Soundtrack focus: Audio is the subject and star of Berberian Sound Studio 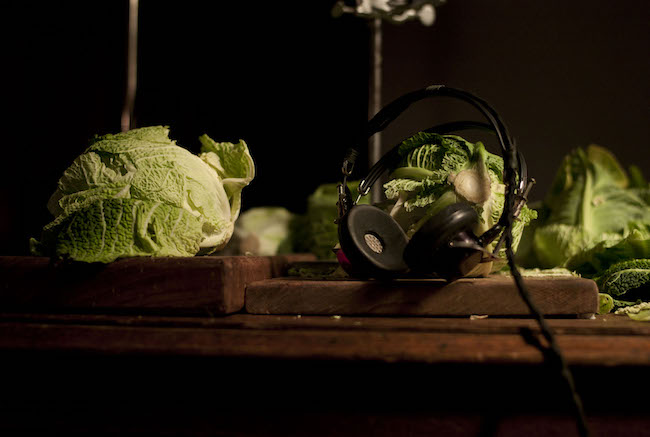 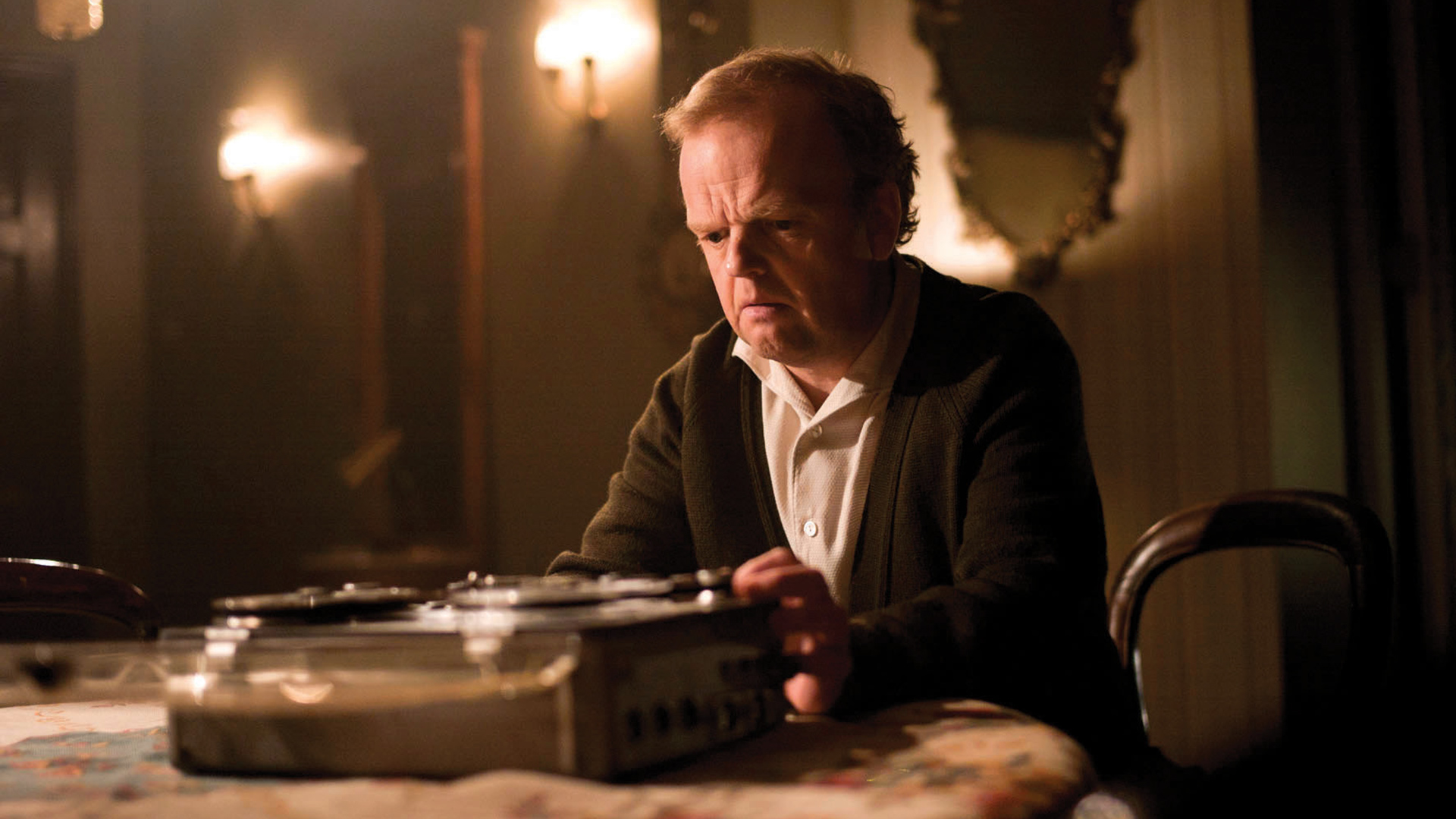 The blurred line between reality and pretence - and the part sound plays in the misdirection - is at the heart of Peter Strickland's stylish, perplexing 2012 conundrum, Berberian Sound Studio. Kevin Hilton looks at how audio comes to the forefront in a disturbing story of identity and morals.

Peter Strickland has said that part of his intention in making Berberian Sound Studio was to focus on the mechanics of cinema, which would otherwise be hidden. The film grew out of a 2005 short the director made with experimental musicians the Bohman Brothers, who incorporate elements of Foley into their compositions and performances.

He later decided to make a full feature and expand the idea, concentrating on a specific aspect of filmmaking with the action and story merely a backdrop to what would otherwise be backroom activity. As a vehicle for this Strickland chose the Italian giallo horror-thriller genre, which is notable for its obvious use of dubbing, over-the-top sound effects, pulsating electronic soundtracks, dramatic camera moves, garish lighting and creatively extreme violence.

The art and practicalities of filmmaking are writ large in giallo; this is the Italian for 'yellow', the colour featured on the covers of a series of pulp mystery novels published in the country from the 1920s onwards. The movie genre was almost single-handedly created in the 1960s by director Mario Bava, reaching its popular and stylistic peak in the 70s through the films of Dario Argento. His almost hallucinogenic style took the basic tropes of point-of-view shots and shadowy, deranged killers, together with an overtly misogynistic tone, and married them to bravura visuals and distinctive music by, first, Ennio Morricone and then prog rock group Goblin. 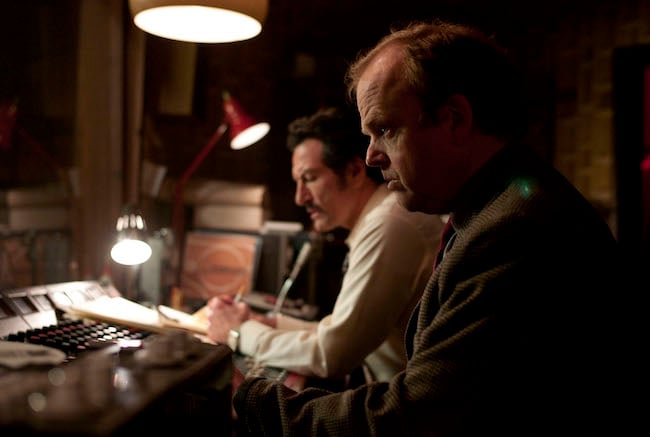 These influences form the strange world that English sound engineer Gilderoy (Toby Jones) finds himself in when, some time during the 70s, he arrives in Italy to work on what turns out to be a lurid horror flick about witchcraft called The Equestrian Vortex. The film Berberian Sound Studio opens with the sound of a reel of tape being spooled through and a corresponding VU meter. The crumpled figure of Gilderoy is then seen walking the corridors of the post-production centre as plinky music plays on the soundtrack and merges with an inverted whoosh, signifying he is entering a different realm.

From within the control room comes the sound of screaming. This cuts abruptly to the titles - not of Berberian Sound Studio but of The Equestrian Vortex, complete with garish graphics and Goblin-like rock music courtesy of British indie band Broadcast. This is disconcerting for the viewers and makes us appreciate how Gilderoy must feel. Recognised for his work on nature documentaries filmed near his home in Surrey and ability to produce otherworldly sounds from everyday objects - the noise of a space ship from a light bulb, as he demonstrates to the crew in a lighter moment - Gilderoy is almost immediately out of his comfort zone. 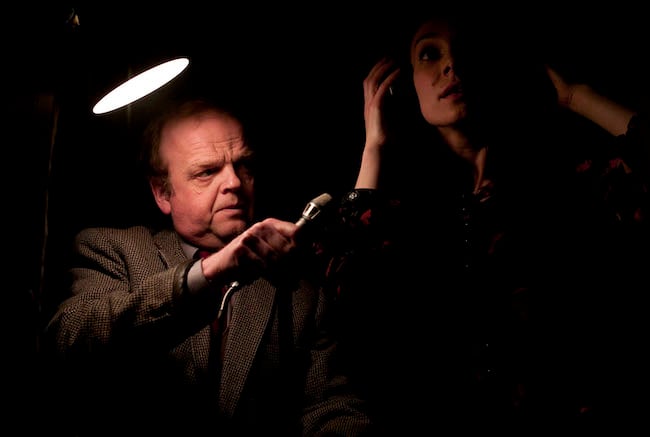 Not only is he in a country where he cannot speak the language and the people he meets are either hostile or lavish him with fulsome praise, but he is shocked to be working on a horror film - or, as a voice actress describes it, "sordid trash". Introduced as the new mixer by producer Francesco Coraggio (Cosimo Fusco), who assures him "a new world of sound awaits you", Gilderoy even appears adrift in his natural environment, the audio studio.

Sound not only permeates the drama of Berberian Sound Studio but is also to the fore through the post-production of The Equestrian Vortex, the film-within-a-film. This last process sets up the cause of conflict - both internal and external - for Gilderoy, as he struggles to reconcile his professionalism and pride in his work with the revulsion and fear he feels for not only the images he is working to but the way autocratic director Giancarlo Santini (Antonio Mancino) treats people, in particular the female voice artists. 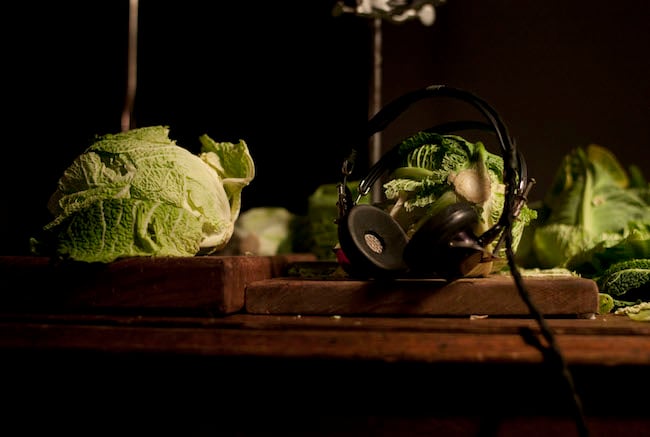 Alone in the flat above the studio, Gilderoy plays back reels of sound effects on a portable Nagra machine. Each track is prefaced by details - "Recording of Mother's mantel clock using an AKG 251 microphone" - which convey not only Gilderoy's 's dedication, if not obsession, but also his loneliness. Later he is discovered by singer/actress Silvia (Fatma Mohamed) walking on leaves in a Foley tray, explaining to her that it reminds him of home.

To deal with his homesickness Gilderoy throws himself into his work, including changing the voice booth mic to an omni-directional model for recording screams "because it gives more space". The resultant scream mixes into the noise of a food blender Gilderoy is recording for another effect. He works with intimidating Foley artists Massimo and Massimo, who give him a demonstration of smashing melons to simulate people being beaten. Gilderoy ends up twisting radishes for the mic, while watching torture scenes of characters having their fingers snapped. The audience only hears these sickening sounds, with the full awfulness of the unseen images conveyed by Toby Jones' expression. 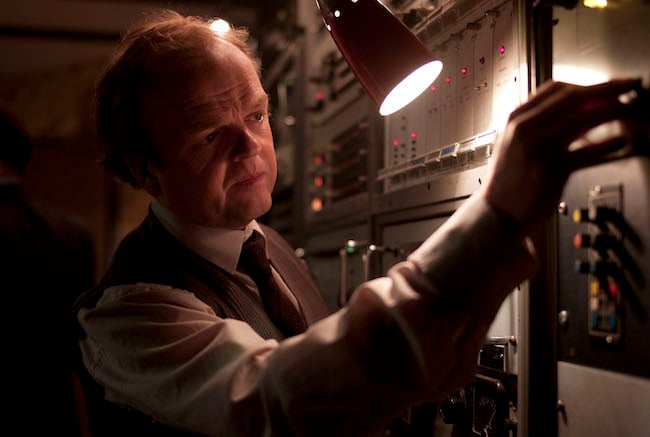 Gilderoy becomes increasingly disturbed by the film and Silvia's stories of Santini's abusive behaviour. In an misguided attempt to save Silvia and her on-screen character, Teresa, Gilderoy repeatedly misses his cue while recording a red hot poker effect, angering Santini. From here real life and fantasy merge and swap places; at night Gilderoy is woken by the door bell but thinks it might be one of his effects tapes. All of this in a film being watched by a now Italian-speaking Gilderoy in the control room, who later uses oscillations and tones to torture an actress into producing the perfect scream.

In the end not only has Gilderoy's love of sound been perverted by the film he was working on but he himself has been taken over and changed by something he does not comprehend but instinctively hates.