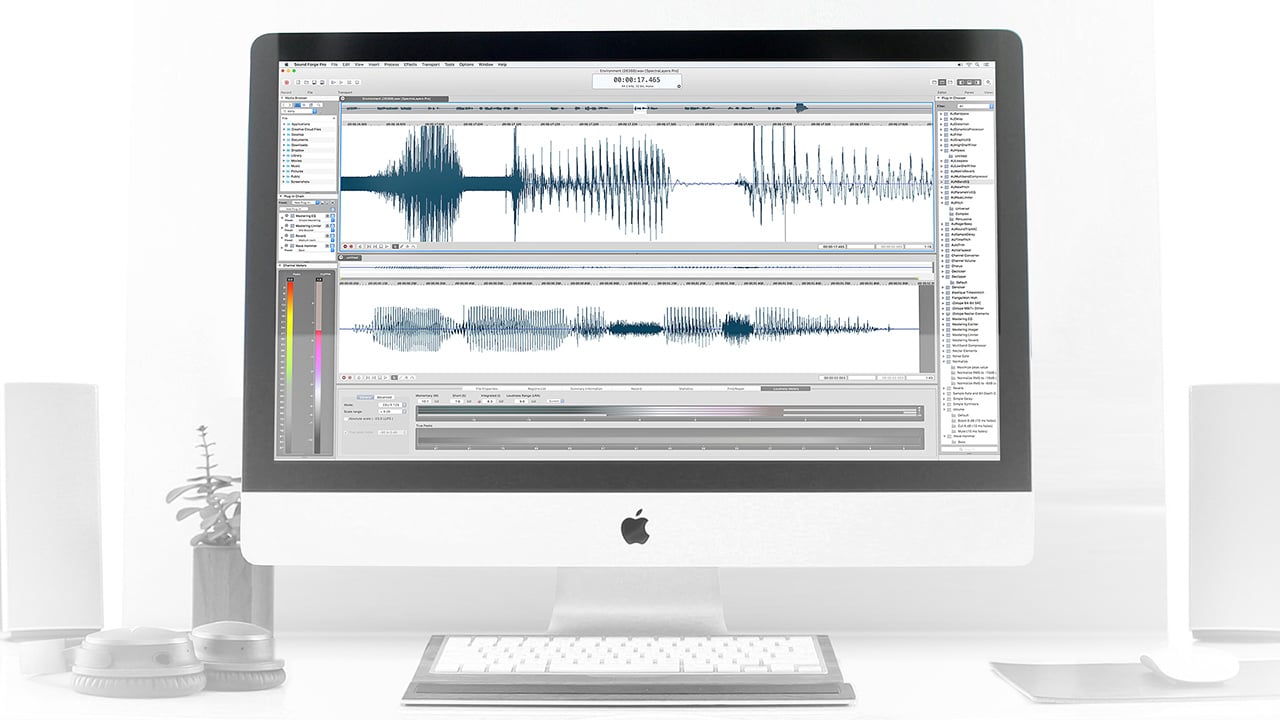 There are plenty of modern tools that deal with audio, but sometimes you need a product with a very narrow focus to do the job without compromise. That’s where Sound Forge Pro fits in. Originally part of Sonic Foundry’s software development, the product, along with its siblings Vegas Pro and Acid, migrated to Sony Creative Software. Sony, in turn, sold off those products to German software developer Magix, where they appear to have found a good home. I recently tested Sound Forge Pro Mac 3, which is the macOS companion to Sound Forge Pro 11 on the Windows side. (Sound Forge Pro 12 is expected to roll out in 2018.) Both are advanced, multichannel audio editors, dedicated to editing, processing and mastering individual audio files, as opposed to a DAW application, which is designed for mixing.

Although Magix’s other products are PC-centric, they’ve done a good job embracing and improving the Mac products. Sound Forge also comes in the Audio Studio version — a lower cost Windows product designed for users who don’t need quite as many features. There is no Mac equivalent for it yet. The former Mac version that was sold through Apple’s Mac App Store is no longer available. Naturally, a product like Sound Forge Pro may require some justification for its price tag, since the application competes with great audio tools within most modern NLEs, like Final Cut Pro X, Premiere Pro, or Resolve. It’s also competing with Adobe Audition (included with a Creative Cloud subscription) and Apple Logic Pro X, which sports a lower cost.

Sound Forge Pro is primarily designed as a dedicated audio mastering application that does precision audio editing. It works with multichannel audio files (up to 32 tracks) in maximum bit rates of 24-bit, 32-bit, and 64-bit float at up to 192kHz. It also works with video files, although it will only import the audio channels for processing. Sound Forge Pro for the Mac comes with several iZotope plug-ins, including Declicker, Declipper, Denoiser, Ozone Elements 7, and RX Elements. (The Windows version includes a slightly different mix of iZotope plug-ins.) That’s on top Magix’s own plug-ins and any other AU plug-ins that might already be installed on your Mac from other applications. The bottom line is that you have a lot of effects and processing horsepower to work with when using Sound Forge Pro. 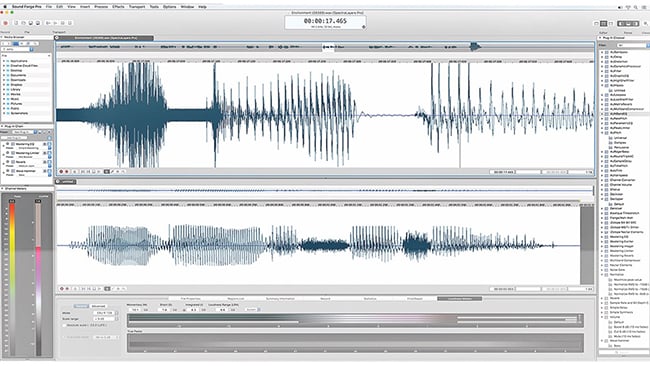 Even though Sound Forge Pro is essentially a single file editor, you can work with multiple individual files. Multiple files are displayed within the interface as horizontal tabs or in a vertical stack. You can process multiple files at the same time and can copy and paste between them. You can also copy and paste between individual channels within a single multichannel file.

As an audio editor, it’s fast, tactile and non-destructive, making it ideal for music editing, podcasts, radio interviews and more. For audio producers, it complies with Red Book Standard CD authoring. The attraction for video editors is its set of mastering tools, especially loudness control for broadcast compliance. Both Magix’s Wave Hammer and iZotope Ozone 7 Elements’ mastering tools are great for solving loudness issues. That’s aided by accurate LUFS metering. Other cool tools include AutoTrim, which automatically removes gaps of silence at the beginnings and ends of files or from regions within a file. There is also élastique Timestretch, a processing tool to slow down or speed up audio while maintaining the correct pitch. Timestretch can be applied to an entire file or simply a section within a file. Effects tools and plug-ins are divided into those that require processing and those that can be played in real-time. For example, Timestretch is applied as a processing step, whereas a reverb filter would play in real-time. Processing is typically fast on any modern desktop or laptop computer, thanks to the application’s 64-bit engine.

Basic editing is as simple as marking a section and hitting the delete key. You can also split a file into events and then trim, delete, move, or copy and paste event blocks. If you slide an event to overlap another, a crossfade is automatically created. You can adjust the fade-in/fade-out slopes of these crossfades. The only missing item is the ability to scrub through the audio in any fashion. So, no mouse scrub or JKL-key jogging with audible audio, as you’d normally find in an NLE application. That’s apparently there in the Windows versions, but not in this Mac version.

All in all, if audio is a significant part of your workload and you want to handle it in a better and easier fashion, then Sound Forge Pro Mac 3 is worth the investment. Sound Forge Pro Mac 3 is available through Magix’s website for $299. This bundle includes the two iZotope filter sets, worth $129 each. Windows Sound Forge products range from $59.99 to $399.95. In addition, Magix also offers the Audio Master Suite bundle, which combines Sound Forge Pro and SpectraLayers Pro, a spectrum-based audio editing tool.