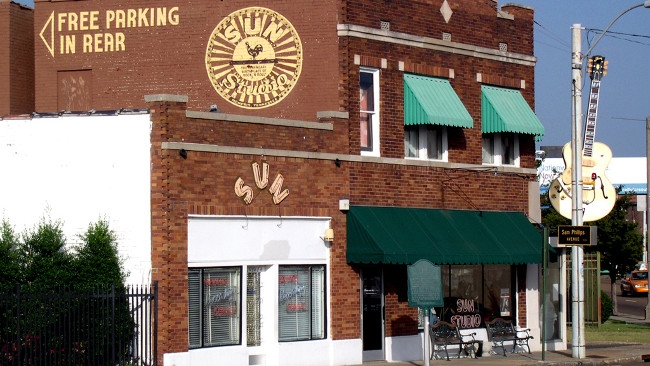 In this installment of our series on famous studios, we profile Sun, which was arguably the birthplace of rock and roll and launched the career of Elvis Presley. By Jim Evans.

Sun Studio was opened in Memphis on January 3, 1950 by record producer, Sam Phillips. The studio was originally called Memphis Recording Service and shared a building with the Sun Records label. Memphis Recording Service earned the title of "Birthplace of Rock and Roll" in 1951 when Jackie Brenston and Ike Turner recorded Rocket 88, a song with a heavy backbeat and a sound all its own. Rock and roll was born.

In 1953, an 18-year-old Elvis Presley walked into Memphis Recording Service with a cheap guitar and a dream. Nervously, he sang a demo song, failing to impress Sam Phillips. Elvis continued to hang around the studio, however, and in 1954, Sam Phillips asked him to sing again, backed by a band made up of Scotty Moore and Bill Black. After hours of recording and nothing to show for it, Elvis began playing around with an old blues song, That's Alright, Mama. The rest, is of course, history.

In 1969, Sam Phillips sold the label to Shelby Singleton, and there was no recording-related or label-related activity again in the building until the September 1985 Class of '55 recording sessions with Carl Perkins, Roy Orbison, Jerry Lee Lewis and Johnny Cash, produced by Chips Moman.

In 1987, the original building housing the Sun Records label and Memphis Recording Service was reopened by Gary Hardy as Sun Studio, a recording label and tourist attraction that has attracted notable artists, such as U2, Def Leppard, Bonnie Raitt and Ringo Starr.