How to design a DAW 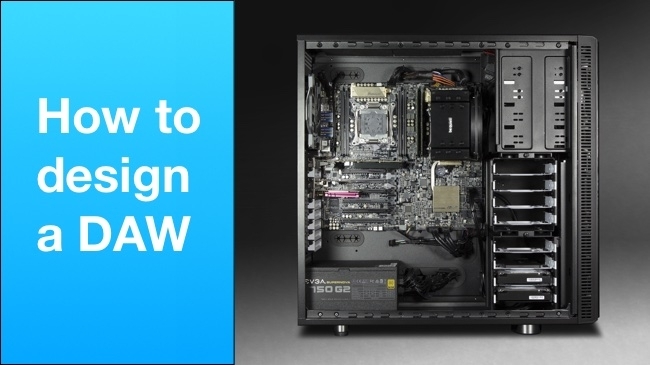 Some people take the view that a Digital Audio Workstation (DAW) is the software that you use to edit your audio tracks. Leo Waldock argues that a DAW is a combination of a suitable laptop or PC, the sound card/interface, your chosen software and the mouse or instrument you use to control the software. And here's how to put one together...

I am going to put software to one side, ignore the controller, and merely point out that every PC comes with USB 3.0/2.0, and you should have little difficulty adding Firewire or Thunderbolt if it is necessary.

With a PC-based workstation you have the scope to configure the build to deliver the price and performance that you need. A DAW is different from a video workstation as video requires you to play back two or maybe three tracks of very high bit-rate material. By contrast each audio track is around 1.4Mbps and even when you have multiple tracks the data flow can vary between a trickle and a torrent.

For video you need as much processing and graphics power as possible and then you have to cool the resulting beast and endure whatever noise levels might result.

With audio there are some scenarios where you can use pretty much any modern PC as the hardware requirements for your chosen software package are likely to be comparatively low. Cubase, for example, requires a spec of dual core CPU, 8GB of RAM and 15GB of hard drive storage, which covers pretty much any PC on the market. If you are recording audio using Avid Pro Tools you need a Core i5 and 4GB RAM, while Pro Tools HD steps up to a Core i7 and 8GB RAM.

That's not the same thing as saying that any PC will make a decent DAW, partly because there is the question of latency and response, but also because we want a DAW to either be very quiet or utterly silent.

It is worth taking a moment to look at this page of specialised DAW systems on sale at Scan that range from £650 inc VAT to £1700 inc VAT.

No doubt you will spot some recurring themes on the page as Scan favours Intel CPUs and SSD storage, they don't use a graphics card unless it is necessary, the CPU cooler is typically quite large and the case is chosen for its emphasis on low noise levels.

These are key points when you are specifying a new DAW, and they are also a useful guide if you are building your own DAW (or upgrading a PC to create a DAW).

Clearly the CPU lies at the heart of your PC and nails down a significant part of the specification. It is tempting to simply say that you should buy a 6th Gen Skylake rather than a 5th Gen Broadwell or 4th Gen Haswell, however you also need to consider the integrated graphics that are part of the CPU. Haswell had competent HD Graphics 4600, the stillborn Broadwell made real leaps forward with Iris Pro Graphics 6200 and Skylake has taken a step backwards with HD Graphics 530.

Once you select your CPU family you then need to pay close attention to the TDP (Thermal Design Power) rating of individual models as the amount of heat is directly linked to the level of performance and also the amount of cooling you require. If you plump for Skylake you could choose apparently similar models with very different ratings. For example Core i5-6600K is rated at 91W TDP, Core i5-6600 at 65W TDP and there is a low power Core i5-6600T rated at 35W.

If you're editing a radio show you might be perfectly happy with a low TDP CPU that sips power and runs barely above room temperature. On the other hand if you're working with 48 or 96 audio tracks at 192KHz and 24-bit you are talking about data rates that are comparable with video and that Core i7-5820K in the £1700 Scan system is starting to look pretty darn appealing. Add in compression, eq and reverb along with plug-in effects such as chorus and it is probably fair to say that you cannot have enough CPU power.

Do you need a GPU?

Choosing a CPU, motherboard and memory will account for about half the cost of your DAW and will also dictate the level of CPU cooling and whether or not you require a graphics card. The vast majority of Intel CPUs have a graphics core, although the display outputs on the motherboard may leave something to be desired. A high end LGA 2011 CPU such as Core i7-5820K does not have a graphics core, which is why Scan has specified a passively cooled XFX R5 230 graphics card on the most expensive DAW in their listing.

Personally I think there is something to be said for spending £150 on a graphics card such as a Zotac GTX 950 or 960 as you get a full set of graphics outputs and the Nvidia drivers work superbly. This type of graphics card will barely tick over for non-graphics intensive workloads which means the power draw is trivial, the heat output is tiny and the graphics card is effectively silent, although it is a slightly decadent way of going about things.

Choose a high end air cooler for your CPU such as the be quiet! Dark Rock TF in the photos and you will find it is effectively silent. It can handle a CPU with a TDP of 220W so a mainstream desktop processor will not cause it to break sweat and as a result the fan(s) will turn slowly and quietly. Be sensible and choose a decent case that puts the emphasis on noise deadening and dust filtration, rather than massive air flow. You will reap the reward of a DAW that is very quiet and doesn't suffer from vibration, rattles or buzzing.

Your Windows drive should be an SSD (Solid State Drive) as it is fast and silent, however you will probably require additional drives to provide bulk storage and these would generally use HDD technology (Hard Disk Drive) with traditional spinning platters. These drives can be clearly audible so it is best to select a 5,400rpm drive such as WD Green to reduce the noise. A lower capacity model with fewer platters (say 3TB rather than 6TB) will reduce heat levels and that also helps the cause.

On the other hand, if you are working with a large number of tracks and the DAW might be required to access (say) 48 files at the same time, as well as any previously rendered sections in a track, you may need to step things up a level. While it might sound horribly extravagant to use SSDs for media storage as well as for the Operating System you can currently buy a 1TB SSD for less than £300 and that will give you all the speed you require.

One source of noise that is often overlooked is the PC power supply unit (PSU). If your PSU is a low efficiency Bronze unit that wastes about 20% of its power you can expect it to generate 50W-100W of heat in typical use. That requires cooling which in turn implies a certain level of fan noise.

A more expensive Gold or Platinum rated PSU will waste less power and run cooler, and will probably have a more sophisticated cooler that responds to the thermal load. There is another aspect to the PSU that is far less obvious which is that cheap units typically use inferior components and that can give rise to the terrors of coil shriek. This is annoying in a gaming PC and disastrous in a DAW.

There are a tiny handful of passively cooled power supplies on the market from companies such as Seasonic that are silent and these are the pick of the bunch for your new workstation.

Choose high quality components that are efficient and require less power and you will minimise the amount of heat that your system produces. That will reduce the amount of cooling you require and the end result is a DAW that is fast, effective and very quiet.