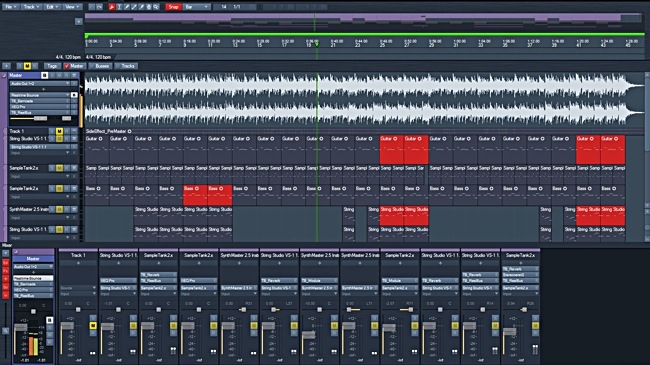 There's a wealth of highly competent audio software out there, either free, or not costing much at all. Robert Rif tells us about one of his favorites

When I began making music, or "noise", me and my friends used whatever was available to us, i.e. buckets, an old school organ, and then advanced to making tape loops, pre-sampling style.

When the mighty old C64 entered the scene back in 1983, with it's built in SID chip, a new era began. It didn't take long before I started to use it with a sequencer software called Steinberg Pro 16 to control my growing collection of drum machine, synths and samplers. I did try Dr T's KCS, but I couldn't get my head around that one, so I returned it to the shop. You could do that with software back then.

The C64 was then replaced with a shiny new Amiga, a new sequencer software, Bars & Pipes Pro, and a new Yamaha TX16w sampler, which now has made a return as a VST plug in, and yet another step was reached in how to make music, (or "noise").
I then went to art school, and now paint brushes and canvas were my tools for the years to come. I neglected music-making and my now ageing MIDI setup.

In 2002 I got a PC, and I was back on track again. Eager to learn what I'd missed, it must have tried almost everything on the market. From my previous experiences, I was used to pattern base sequencer software, where you make patterns, and then arrange these patterns into a song. Here I found a software called Fruity Loops, now FL Studio, and it was a joy to use. I could once again make music, and it was fun too. But I soon found it to be a bit limiting for my work. So I went looking for something else.

Back in 2007 I happened to find a copy of Computer Music Magazine and on its cover disc I found a version of Podium, which looked interesting enough to try out. So I installed the software, and soon realised that this will need some time to learn. I put my learning cap on (everyone should have one) and started to get up to speed, making lots of mistakes along the way. But I have to say that Podium looked more difficult to learn than it actually was. All I had to do was to approach it the same way I approached Lightworks: with an open mind.

Now I've been using Podium for years, to create music, ambient, themes, or whatever ideas fly through my mind. And since the idea usually flies fast, I need to be able to work fast to be able to catch it, and in Podium I can work that fast. I use ProTools on a regular basis for post-production, and I've never been able to use it for work when I need to get an idea down quickly, when when I need to tap into a torrent of inspiration.

I've even used Podium for post-production on a short, even though Podium doesn't have a video track, it wasn't too difficult. I added a "place holder" sound in the NLE where I needed an effect synched with the picture.

Podium's built-in reverb also made it easy to blend in ADR, since you can re-create the room in the reverb. Brilliant!
There's a lot of  stuff in Podium that could be explained in page after page, but I think it's better you try it for yourself, as we all have different needs and ways in which we work.

But, just to mention a few.  You can have up to a maximum of 32 channels surround for your art sound projects, 32-bit floating point engine, clip gain, (these last two were only recent introduced in ProTools 10), and loop recording (like 'playlist' in PT). There's a beautiful interface where you can for example have the mixer window slide up or down by double clicking on the Mixer bar when you need it. You can set up many different plugin databases, one for post-production with effects only, one for (voice) recording... etc.  This program has a lot of possibilities. Highly recommended.

Some details about Podium:

Podium offers a hierarchic mixing engine that integrates audio recording, VST plugins and external MIDI and audio gear. Configuration of plugins and external hardware are encapsulated in an object based project structure, which hides the technical complexities when you want to focus on musical inspiration.
Advanced features includes 64-bit mixing, multiprocessor support, surround sound, integrated sound editor, preset librarian and spline curve automation of plugin, MIDI and mixer parameters. The number of supported devices, plugins, tracks, channels and mixer busses are practically unlimited. All this is presented in a stylish and customizable user interface.
The full feature set can be found at: http://zynewave.com/about.html
This is from the Zyneware webiste:

"Object based project structure:
•    Each project can contain an unlimited number of arrangements.
•    Arrangements can share sequences and sounds in the project, making it easy to create alternative mixes of a song."
•    ·Sequences and sounds can be pasted on tracks as phantom copies, so that editing the sequence affects all phantom copies.
Podium is very stable. The Podium development strategy is slow and few new features get introduced, but they are carefully planned and incorporated and all bugs are sorted before the developer moves on to other things.
Since 2010, there has been a free version of Podium which has almost all the features of the paid version (which itself costs a mere US$50).  The paid version has a 64 bit version of the application as well as a 32 bit version for those who like to use currently more numerous 32 bit plugins.
Podium Free is a fully functional freeware edition of Podium. It is identical to the licensed version, except for the following limitations:
•    MIDI interface setup is limited to one input and one output.
•    64-bit mixer engine option is disabled.
•    Plugin multiprocessing is disabled.
•    ReWire is disabled.
•    Surround-sound playback is disabled.