The software that does the "impossible" just got a lot better... Here's Melodyne 4.0 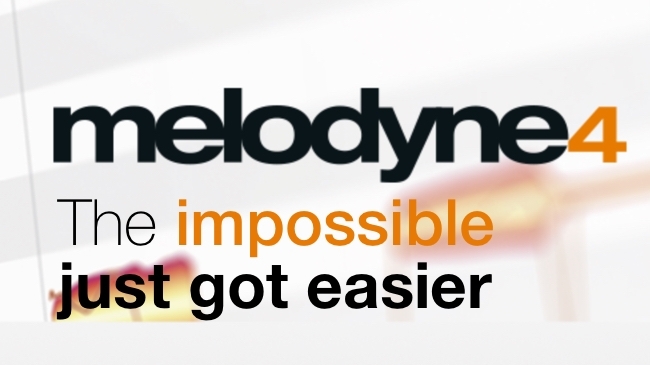 The music editing software that allows you to edit individual notes in a complex audio recording just got a lot more powerful. Released just a week ago, this is a big upgrade

We first reported Melodyne under the headline "Here's something impossible, being done".

And it still seems like that today. When Melodyne was first released - incredibly, back in the year 2000 - it was greeted with disbelief and skepticism. Here's what the company itself (Celemony) says about that time:

"When it first appeared, Melodyne was so revolutionary that only open minded users recognized the potential of the software. The notion that it was possible to reach inside an audio recording and modify notes directly was altogether too novel."

The reaction is understandable. It's always been canon in the audio business that you can't "unmix" audio, and that because of that, you certainly can't modify individual notes in a polyphonic recording.

It's because this is supposed to be impossible that Melodyne is so good. It lets us into a dimension that we were previously locked out of. Specifically, it lets us edit notes in real audio content as if they were on a MIDI sequencer "piano roll" timeline.

Today, Melodyne moves even further into this forbidden domain with the release of version 4.0. Apparently it’s their biggest ever release.

There's plenty that's worth checking out in the new version. Here's a quick overview.

Polyphonic Spectrum Shaper - A sound editor that has access to overtones

This gives a new level of access to audio, with direct manipulation of overtones - the elements of a sound that give it its character over and above the frequency alone. The software gives users fine control over harmonics, to the extent that Celemony claims "This makes it possible to create totally new sounds and turns Melodyne into a kind of audio-track-based synthesizer". This is so much more than mere EQ. With EQ, all notes in a track are affected. With Melodyne's spectral editing, you can change the characteristics of individual notes. It's very hard to visualise this but Celemony has done just that, with a clear display of each overtone for a note, and a "bouncing ball" indicator that shows the amplitute of an overtone at any given time. Editing is as simple as selecting a harmonic - or multiples of them, and dragging. It all happens in real time.

This is mega-powerful. It really is an astonishing achievement. Have a look at the video below - it's a great explanation of how to work in the extra dimensions that Melodyne opens up.

The most impressive part of Melodyne's repertoire - being able to edit individual notes within a chord or cluster for pitch, volume (envelope etc) is now available for use on multiple tracks. Different parts of various tracks can be on screen at the same time.

For software that's able to get so deep into polyphonic music, it's no surprise to hear that it now has "utterly reliable" tempo detection. This extends not just to regular beats but to tempos that move around. So if you're working with an acoustic recording that wanders around a bit, you can either correct it, or make everything else follow it, so that you don't lose that human touch. It will also generate a Click Track to make it easy for other musicians to follow the tempo. You can even imagine using this to make the tempo of a track match the action in a film or a video.

Melodyne 4 is available now. The price of Melodyne 4 studio is €699 or US$849, whilst updating from an older version of studio costs €/US$149. Further information and prices are available from www.celemony.com.

If you like this stuff - don't forget that RedShark Sound is starting soon. Visit www.redsharksound.com for more information, and take our survey to enter the draw to win one of 5 copies of iZotope RX5.