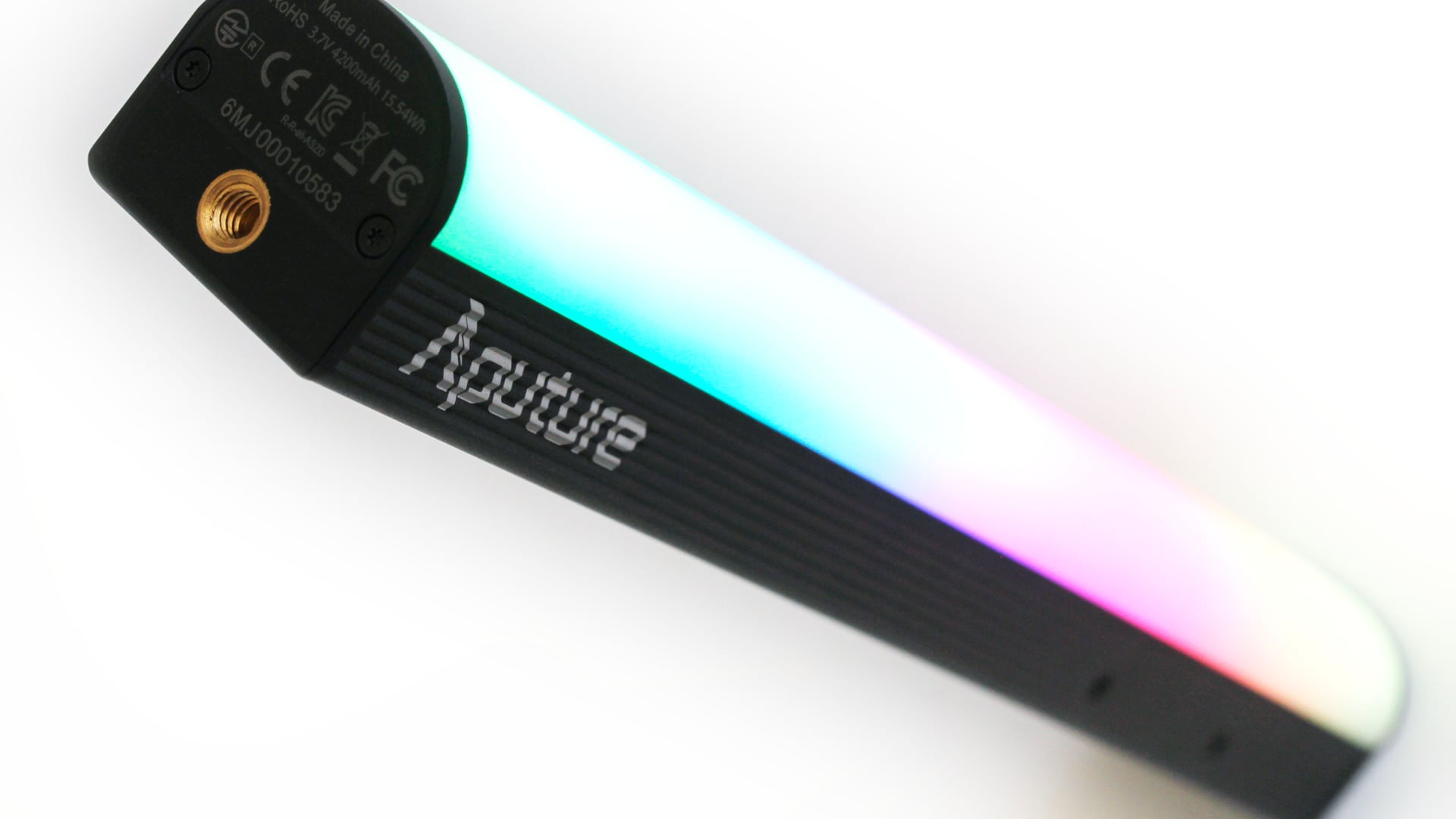 The new Aputure MT Pro is a pixel tube capable of animated effects that comes in at a very competitive sub £200 price tag. Phil Rhodes is quietly impressed.

Aputure’s MT Pro is a new incarnation of what we might call an LED stick light. They’re not really fluorescent replacements; an MT Pro couldn’t be put in an office light in a period piece set in the 1960s, but the form factor is familiar. Either way, while one-foot fluorescent tubes were uncommon, with rare exceptions for things like Kino-Flo’s mini-flo, years of replacing fluorescents with comparable LEDs has created a teeming market, and lights like the MT Pro must work hard to stand out.

While full colour mixing has long been common, MT Pro is a pixel tube capable of animated effects. That puts us in mind of Quasar, whose tubes also do a lot of clever things. Output naturally depends on how the light is set up, but to give an idea of value, Aputure tells us that the 7W MT Pro should sell for perhaps £170 excluding tax. That’s a bit more than a third the £480 of a Quasar Rainbow 2, which, at 25W, is a bit more than three times the power output over twice the length.

Quasar is therefore cheaper per watt, though that’s not really an apples-to-apples comparison – lights get economies of scale – and we can’t easily compare the complex pixel control features. The MT Pro is actually quite high resolution, with 36 individual elements, so Aputure’s animated effects are less likely to show steps than some others. Animated effects more or less go without saying in 2022, though the MT Pro’s seem well-considered, with enough variability that many common and even less-common effects can be created without the need for an external control device.

The shape of things 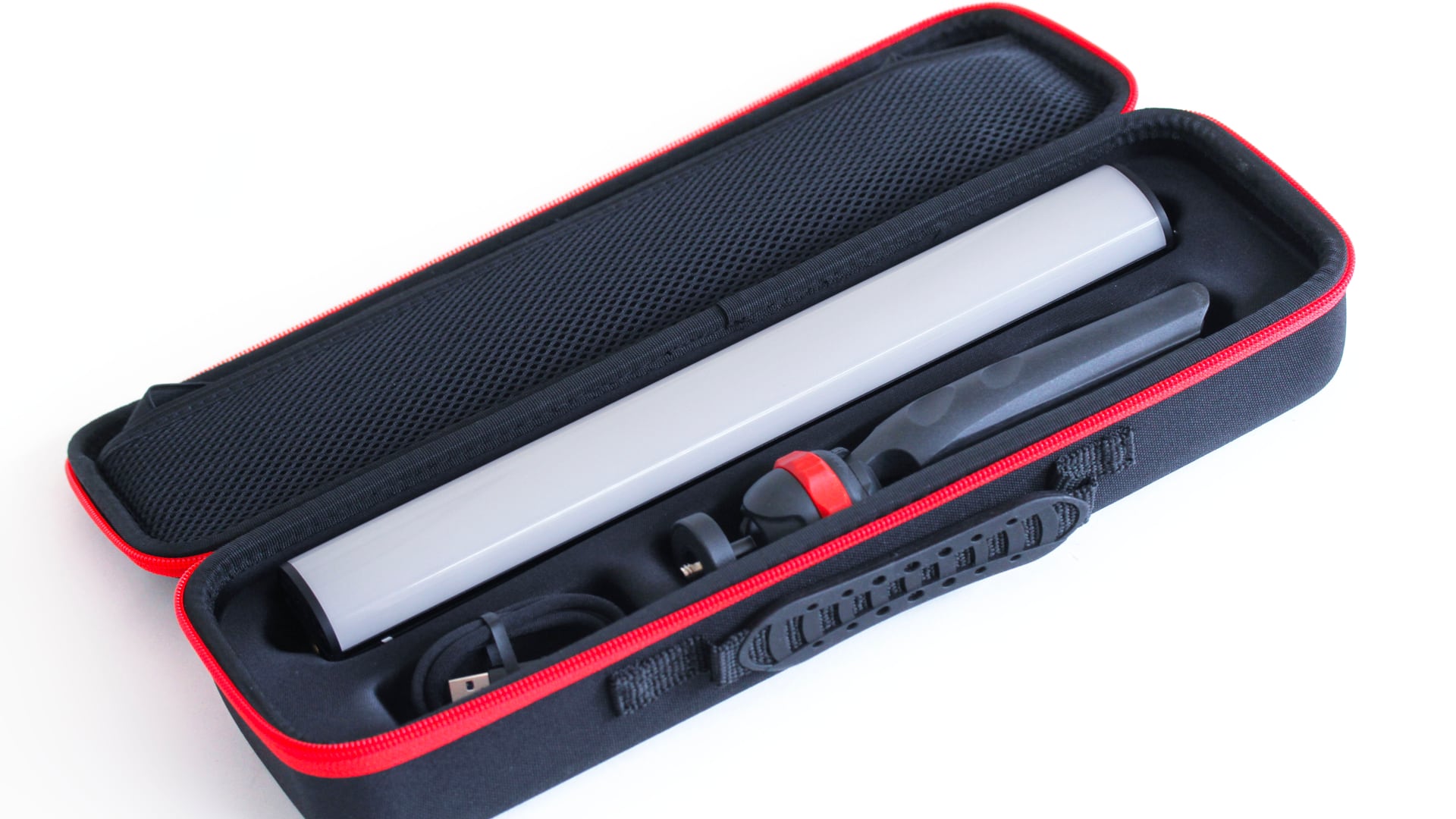 Physically, there are only so many ways this sort of thing can be laid out. Putting controls on the back isn’t great if it’s mounted to something, but putting them on the front forces the device to get longer and leaves us squinting into the light as we make adjustments. Anything advanced is likely to use the various remote control options, anyway; there’s CRMX as well as Aputure’s own, and increasingly-capable, Sidus Link.

On a stand, it’ll ride on one of two quarter-inch threads, either on the end or side. The main body is metal, as it must be for heat dissipation, though the end caps are plastic. The diffuser curves down to meet the vertical edge of the body, which seems trivial until we realise that makes it possible to put MT Pros side by side with no dark gap. 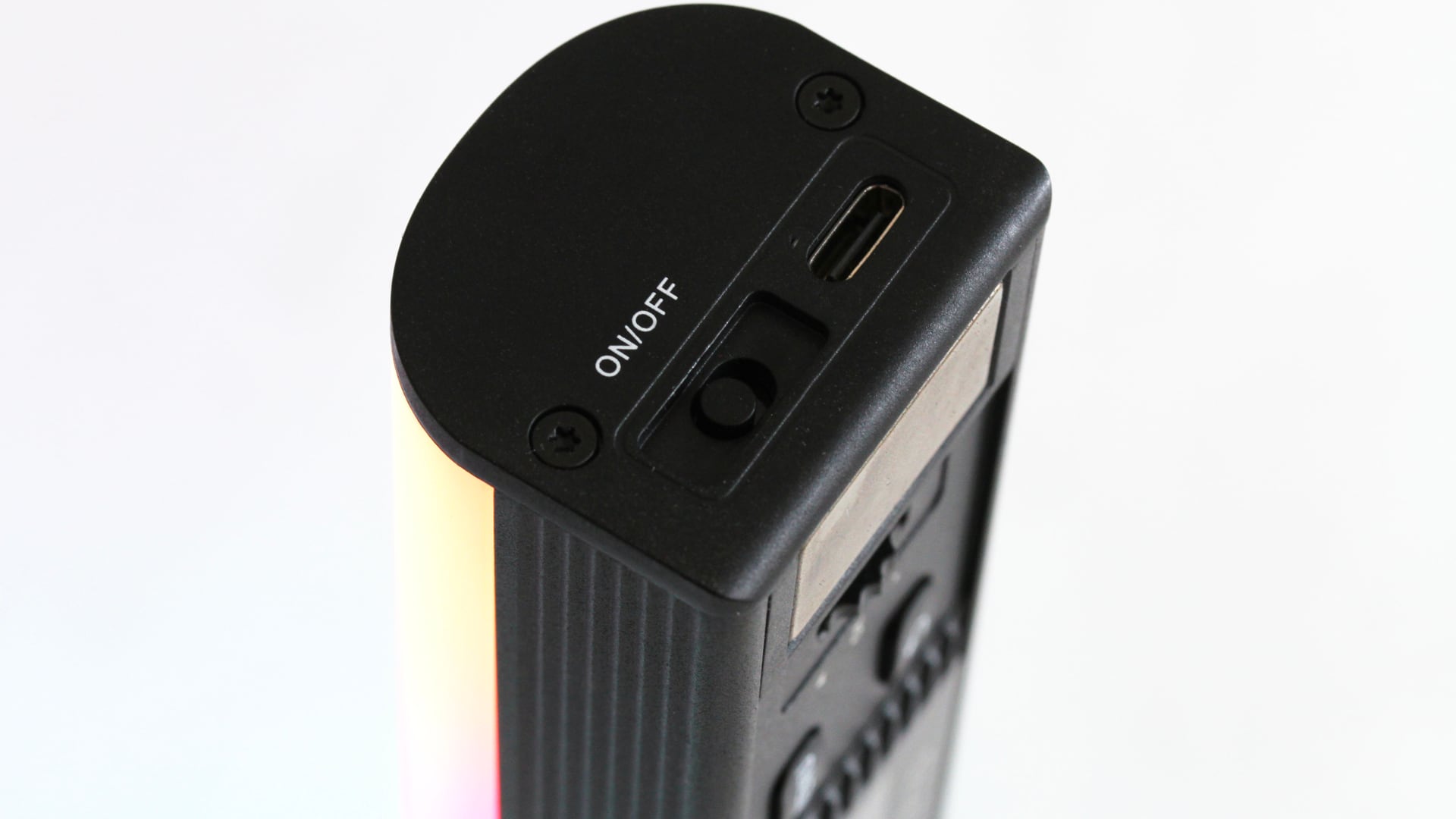 USB-C for power and a hard power switch. No PSU is supplied; beware shoddy eBay USB power supplies, but the flexibility to run it from anything is great

Power input is via a USB-C connector, which doesn’t support any advanced power-delivery protocols because at this power level it doesn’t need to. Both charge and discharge times are a couple of hours. Main power control is on one end, appears to be a hardware switch, and the light remembers what it was last doing at power-up. There is a moment of rainbow cycling at switch-on which seems calculated to distract people, and might be best disabled to avoid becoming the Shane Hurlbut to someone’s Christian Bale.

Diving down into the numbers

Overall, then, MT Pro competes on features with more expensive options, so let’s look at numbers. Consider that this is a diffused tube-type design with at least some light cast beyond 180 degrees, so the intensity figures will be far lower than for the PAR-style lights we’ve tested previously. Measurements were taken from a range of one metre at 2800, 3200, 4200, 5600 and 6500K, plus the light’s minimum and maximum settings of 2000 and 10,000K, at 100%, 50% and 5% output.

While MT Pro does well at 2800K, it’s fair to say that colour quality falls off below that, with TLCI struggling to exceed 11 (yes, eleven, out of a hundred) at full power and 2000K. At that point we’re talking more about an orange light than a warm white one, though. Perhaps the really low CCTs would be better omitted from the user interface.

Intensity is consistent, with a small 10-lux brightening around 6500K; otherwise, one-metre brightness is 150±10lx. CCT drifts low at higher numbers, but given the small mired shifts caused by changes in colder whites, it’s not so you’d notice. 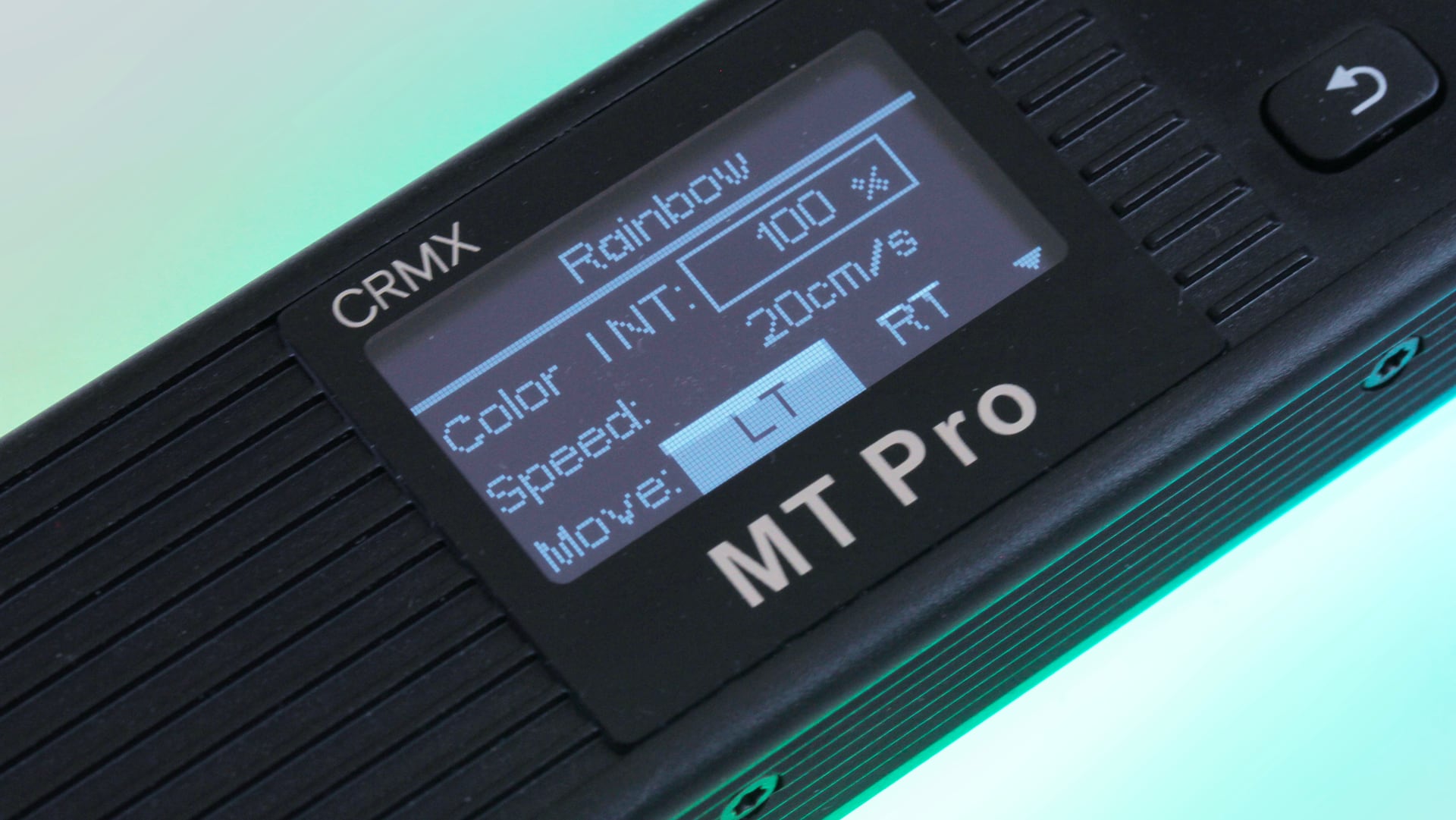 All the animated effects have lots of configurability, more than most, which makes them a lot more useful. It'll even do a Knight Rider scanner in red if you want... [Who doesn't? Ed.]

If there’s a standout feature, it’s that MT Pro also produces good whites in its HSI mode. The full suite of measurements were not made in HSI mode, but a spot check of the 4200K HSI option revealed a 95 TLCI, 88 R12 and 82 R9 at zero saturation. It’s never been quite clear why this isn’t normal - why, in many lights, white isn’t just zero saturation at a given CCT, and why lights need separate modes for colour and white. Well, OK, it is clear, it’s because it’s hard to do everything in one mode. MT Pro is actually very good at it.

The only other potential caveat is something we can only speculate about. The sheer number of pixels in MT Pro might cause some people to suspect there’s likely pulse-width modulation going on. Other lights do so and it’s fine, when done properly. Certainly it isn’t noticeable to either the flicker function of the UPRTek CV600 or to the old cellphone short-exposure trick, so if it’s there, it’s unlikely to cause problems.

MT Pro is very comprehensive, though it’s hard to shake the feeling that as these lights get more and more sophisticated, the market for them becomes smaller and smaller. It certainly is sophisticated, though. The sleeper hit is that ability to maintain decent whites in colour-emitting modes. The fact it’s capable of doing that says good things about the underlying engineering, which portends many nice things for the future.