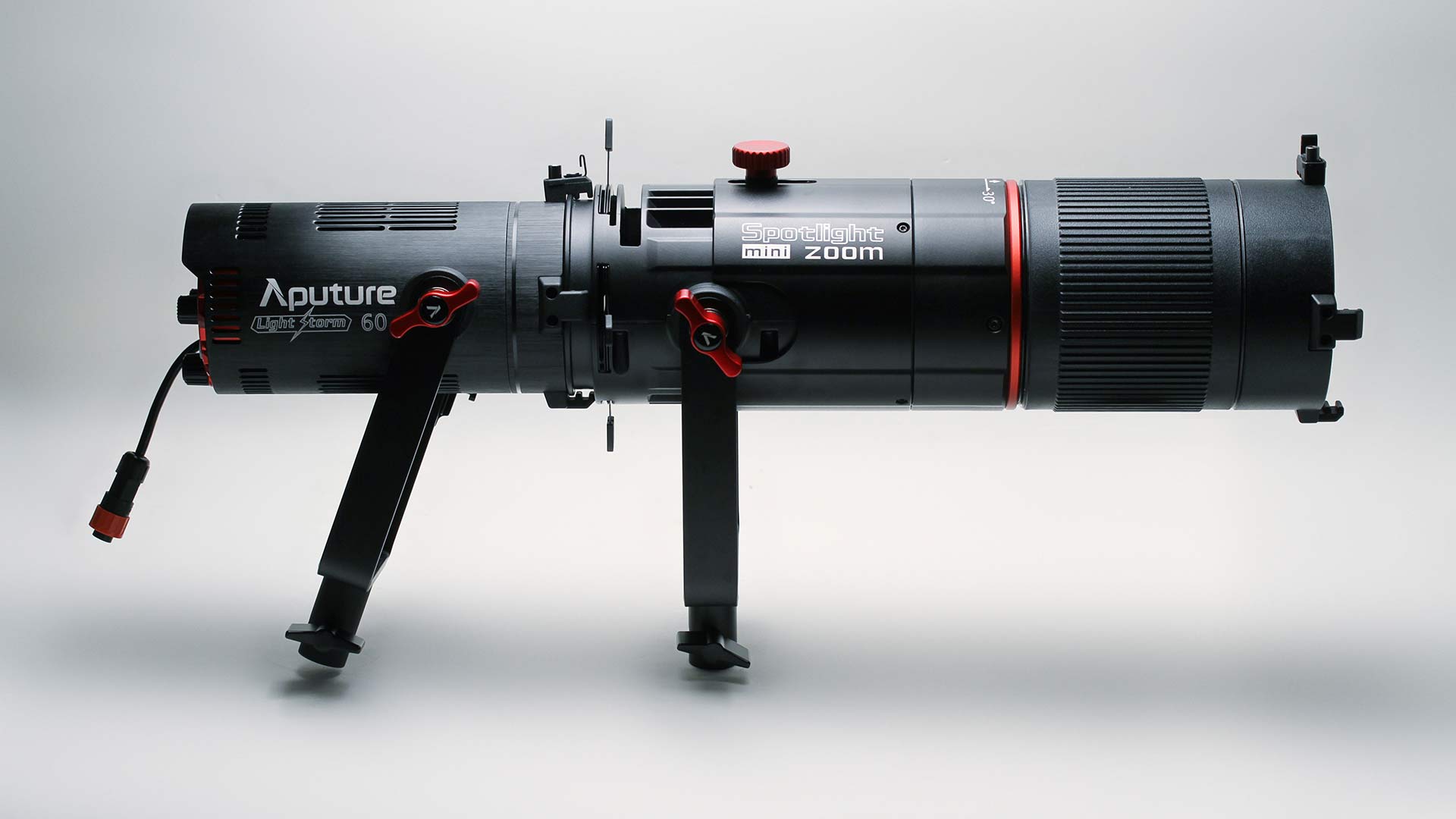 LED hard lights are now fairly common. LED gobo projectors aren’t, at least outside theatrical lighting. Aputure has already solved this problem at the larger scale with its spotlight mount for the 100- and 300-series lights; the projection option for the 60-series was announced a while back and, happily, has just become available for review.

Pictured here is the LS 60d, the daylight edition. The x-suffix light offers adjustable colour temperature. Both are effectively miniature fresnels, although the lens isn’t actually in fresnel format – it wouldn’t save much bulk at this scale. On its own, the 60d is a nice little light; zoom control is smooth, barn doors work well on wide beams, and the lens is set up to diffuse just enough to create a nice soft-edged spot. 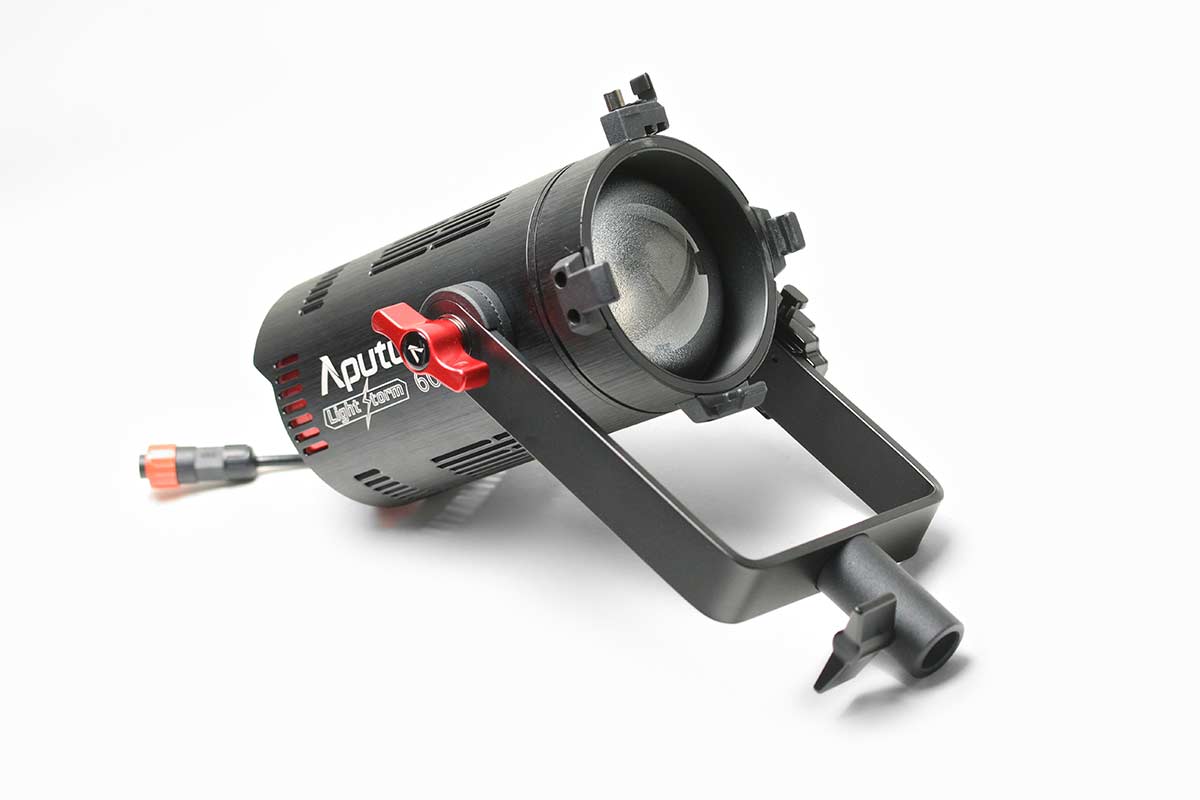 The whole thing is built into a drawn aluminium tube with lots of slots for ventilation, with the controls on the back (the glossy finish around the controls is an unnecessary smudge and scratch magnet). The accessory mount at the front – basically a gel frame mount - keeps the light small, with an adaptor to Bowens included. The included barn doors mount directly. The yoke clamp plus the clip that holds accessories in are plastic, which is a bit of a shame for reasons we’ll encounter later.

Power options are very complete. A V-mount on the yoke accommodates full-size batteries via an included D-tap cable, two NP-F batteries on a supplied plate (the light will run at low power on just one) or the mains power supply in its V-mounting bracket. The power connector and IEC connectors are both latching, the mains lead is long and it’s not tortured into a figure eight, but instead coiled and secured with a velcro tie so it’s easy to handle. The light will come on when power is connected (even if it was switched off when power was last present). Individually these are trivial things, but together they represent a serious quality-of-life increase over much of the market.

The 60d's control panel. In the D-suffix light, colour temperature is fixed at 5500K.

Maximum output measures just over 54,000lx in the beam centre at one metre, with the narrow 15-degree beam selected. At the wider, 45-degree setting, output drops to a still-dazzling 10,327lx. TLCI is never lower than 96.5, even at very lower power outputs of around 5%. R9 reds are maintained at 88 all the way down to 5% output, and almost always over 90 otherwise. Green-magenta shift is low, with a worst case of -0.003 Duv at 5%, where colour control becomes tricky; otherwise, the error is generally 0.001 or below throughout. Colour temperature is maintained within ±100K at all settings, a trivial 6 mired shift of 6, less than half a one eighth CT filter.

The R12 blue, which is deeper than the blue LEDs that drive the phosphors, is a little low, at 75, though that’s no worse than many things. The only solution to this is to switch to white light technology based on violet-emitting LEDs, which is something we might see more of in future as it’s more widely adopted.

Having used Aputure’s spotlight mount on the COB-100 and 300 series, it’s easy to feel a little spoiled. The build and quality of the optics is impressive, and the miniature version we see here has enough weight to suggest similar quality. It’s a medium focal length design, varying between 15 and 30 degrees. It’s not quite a zoom as we might expect in camera, since it doesn’t maintain focus when the focal length changes, but for a light that’s normal.

The only issue arises when the 60d is mounted on the back of the Spotlight Mini Zoom. The combination of the two is then supported on the lens tube’s yoke, not the yoke on the 60d. At that point the 60d is hanging from the back of the lens tube, held in place only the the uppermost plastic clip on the accessory clamp. While that’s fine for retaining accessories onto the light, it isn’t totally convincing as a way to support the whole 60d, given that the forces are then all going in the other direction. The easy fix is to mount the 60d effectively upside-down, which means it’s then not relying on a plastic part to keep things in place; overhead rigging should separately safety-cable both halves of the assembly anyway. 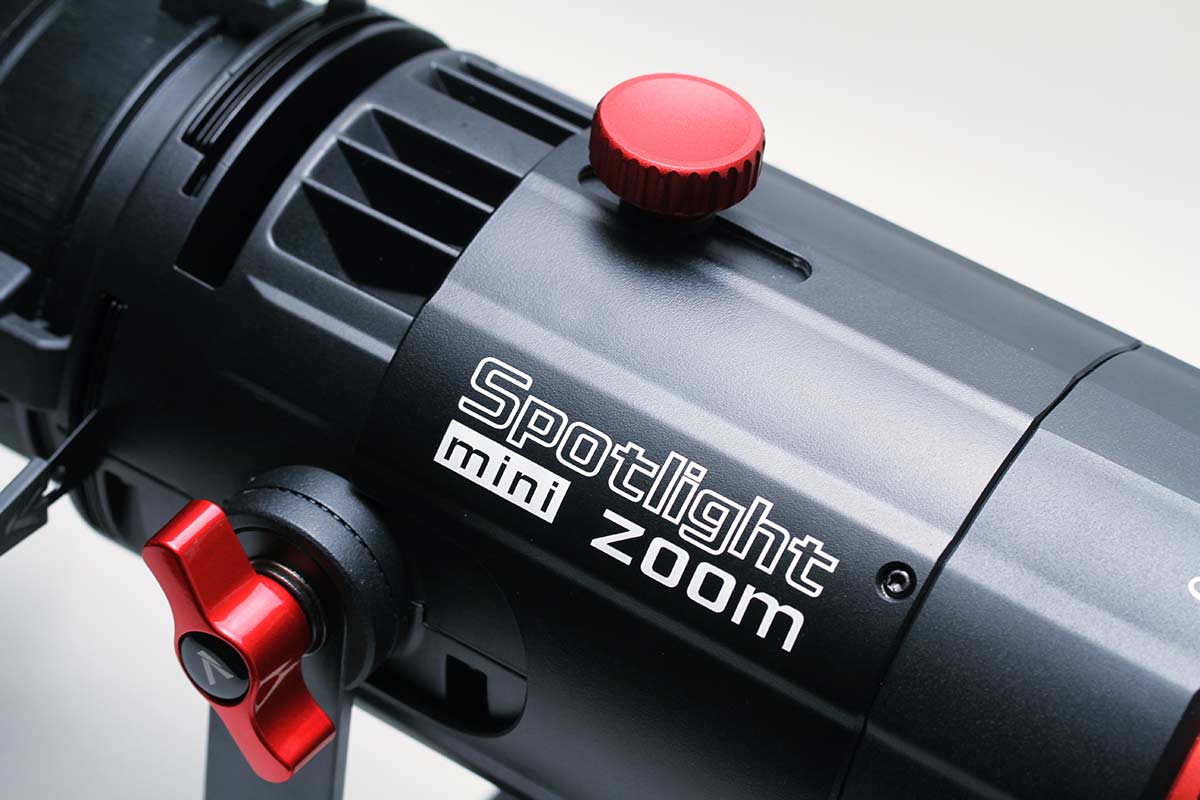 Focus adjustment relies on a single handwheel on top. Loosen that wheel and it’s then possible to slide the front of the lens barrel back and forth, not something that’s easy to do one-handed. The front half of the barrel, with the zoom controls, is externally plastic, but the majority of the build is metal castings. The big twist ring moves smoothly, driving lens elements inside up and down in a way that recalls a zoom lens on camera. As to output, lens tubes like this are never particularly optically efficient devices, although the ability to concentrate the output into a beam creates high point intensities.

Again, the accessories are very complete. Four shutters are built in. The bag also contains an iris module which drops in just ahead of the shutters, and a gobo holder and fifteen gobos covering common applications – foliage breakup, venetian blinds, clouds, and so on. Some of them feel a little theatrical, but it’s worth thinking about what they’ll look like through smoke as a backlight – some of these patterns are really intended to create aerial effects. The foliage in particular is useful as it can save setting a whole extra stand to hold some breakup in front of an existing light.

A set of fifteen gobos is provided, although one of them is an Aputure logo, which might only be useful on special occasions.

Getting away with that requires good optical quality. Often, gobo projectors use rather basic plain glass elements which could create significant chromatic aberration, leaving the projected pattern edged in blue or red in a way that betrays the trick. Sometimes it’s possible to improve that by putting a doughnut, a circular cutout, in front of the final lens to cut off the edges of the beam which pass through the most steeply-curved pieces of glass, though that naturally costs some output.

There’s very little aberration here, though. A close look at the front lens reveals a purple and green sheen, suggesting these might be coated lens elements. That’s not unheard-of in lighting, but it’s a very welcome discovery here. Naturally it’s only possible to either the shutters, gobo or iris in focus at once, but otherwise they all work together nicely.

The iris module operates smoothly - it's so slack, in fact, that it feels as if a jolt might move it.

Prices for the 60d start around US$370; the 60x (not shown here) is a little more expensive, at about $420. Aputure advises the mini zoom should be $499, the same sort of price as the full-size spotlight mount – though the big one lacks zoom. Neither are featherweights nor particularly tiny so they’re not a replacement for something really diminutive like a Dedolight, and it’d be fun to see what pocket-sized options he company could come up with.

As with so many things, the overall idea here is straightforward – it’s an LED hard light with a projection lens tube. Separating them improves flexibility, but it’s rest of the package, particularly the inclusion of iris and gobos and the very complete power accessories, that makes things really nice.