The James Webb Space Telescope will start to send its first hi-res images back hopefully next month. Here are 8 crucial facts about one of the scientific wonders of the age.

The James Webb Space Telescope (let’s just call it Webb from now on) has had anything but an easy path into its L2 orbit. First mooted as a project in the late 1990s when Hubble was still fairly fresh into space, it has survived calls for cancellation, budget cuts, and numerous delays due to the sheer complexity of its instrument packages. The telescope’s primary contractor Northrop Grumman had a particularly torrid time of it, and human error has frequently compounded the issues during the 40 million hours it took to build it.

It was originally planned to cost $1bn and launch in 2007. That it cost close to $9bn and launched 15 years later is mission creep of some fairly epic proportions.

2. It’s as much a spacecraft as it is a telescope

Unlike Hubble which has spent all its life in Low Earth Orbit, Webb has taken station at a solar orbital position at the L2 point 1.5 million km away, roughly four times further out than the Moon. This allows one side of Webb’s sunshield to always face the Sun, Earth, and Moon, blocking their heat and light from reaching the telescope’s heat-sensitive optics. Getting there took a month from launch, making it a proper spacecraft, albeit one without enough fuel to get back. According to Webb's current (almost) live stats, the hot side of the telescope is at 32℃, the cold at -236℃.

In fact, the Ariane 5 rocket that launched it had to give it a slight underboost. This was to allow Webb to make the exact manoeuvres it needed to achieve orbit, something that is difficult to finesse using the full 1336 tonnes of thrust Ariane can provide. Three planned mid-course corrections took place in its journey, all of which were watched with a fair few nerves but were executed flawlessly.

Webb’s primary mirror is over 6.5 metres across (21 feet 4 inches), in comparison to Hubble’s 2.4 metre surface, all of which contributes massively to the new telescope being billed as 100x more powerful than Hubble. It’s made of 18 hexagonal-shaped components that have unfolded at the L2 point to produce the final mirror. This will be able to look back 13.5 billion years in time to a point when the first galaxies were being formed only a few hundred million years after the Big Bang.

4. Unfolding is a thing

Ariane 5’s fairing (nosecone if you will) served to protect Webb from atmospheric drag and heating during ascent but it can only accommodate payloads roughly about 15 feet (4.57 meters) in diameter and 53 feet (16.19 meters) in length. In its fully stowed condition, all folded up, Webb fitted neatly inside the fairing, with just enough clearance to accommodate the relative motions expected during launch.

Fully unfurled it is a lot bigger. Webb weighs 6200kg all in all (17,700 lbs - about the size of a school bus says NASA) and the sun shield alone is around the size of a tennis court (21.2m by 14.1m). The unfolding therefore was a critical part of the whole process and took place over a two-week period on the way to the L2 point. The first week was devoted to the sunshield, the second week to the telescope mirror segments.

5. The launch was not the most dangerous part

A launch is always a critical and a nervous time, though it has to be said the track record of the Ariane 5 is about as good as it gets. Out of (now) 112 launches, 107 have been successful, and it last had a problem in 2018 when two satellites were delivered to the wrong orbit (both recovered to fulfil their mission parameters). The last 15 on the bounce have been successful with no problems.

However, that was only where Webb’s problems started. “There are 344 single-point-of-failure items on average," Mike Menzel, Webb lead mission systems engineer for NASA's Goddard Space Flight Center in Maryland, said in a news briefing. He added that: “approximately 80% of those are associated with the deployment … It's hard to avoid when you have a release mechanism. It's hard to put full redundancy into that."

Honestly, the more you read about it the more astonishing it is that it got through the whole process without a hitch.

6. 10 inventions were created for Webb

One of the reasons Webb took so long to get off the ground (ahem) is that not all the tech was in place to make it happen when it was first conceived. Advances include a “microshutter” device with thousands of tiny windows, each the width of a human hair and programmable to be open or closed, to enable spectroscopic measurement of hundreds of individual objects simultaneously.  A cryocooler was also developed that chills the mid-infrared detectors to the necessary temperature of only a handful of degrees above absolute zero.

Space enthusiasts are always keen to point out the benefits of the space program on Earth-bound technologies  and Webb is no different. Engineers had to develop a technique for precisely and rapidly measuring the mirrors to guide their grinding and polishing, and this technology has since been adapted to creating high-definition maps of eye surgery patients’ eyes for improved precision.

7. It’s not just about the visible spectrum

NASA likes to say that Webb’s instruments are so sensitive that is could theoretically detect the heat signature of a bumblebee at the distance of the Moon, which is partly why it’s being sent to such a cold, dark region of space.

Away from the primary mirror, Webb’s main imager is the Near Infrared Camera (NIRCam), which will cover the infrared wavelength range 0.6 to 5 microns. It is equipped with chronographs which effectively let Webb hold a ‘hand' up to block out the light from a bright object so they can see things close to it, such as exoplanets.

A Near InfraRed Spectrograph (NIRSpec) will enable Webb to analyse the spectrum of an object and extrapolate its physical properties, including temperature, mass, and chemical composition.

A Mid-Infrared Instrument (MIRI) features both a camera and a spectrograph operating in the wavelength range of 5 to 28 microns. This will hopefully provide exactly the sort of wide-field, broadband imaging astrophotography that made Hubble’s reputation.

And finally the major instrument package is rounded out by the Fine Guidance Sensor and Near Infrared Imager and Slitless Spectrograph (FGS/NIRISS), which will allow Webb to point precisely, as well as investigate ‘first light’ detection and much to do with exoplanets in the wavelength range of 0.8 to 5.0 microns.

8. The science starts in the next month (hopefully)

We've already seem some of the first images from Webb while its instruments were being calibrated, and this process continues. All being well, it is envisaged that the first full observations will be made by Webb in June 2022 (though a reading of the scientific runes suggests that may slip to July). We can already get a glimpse of how much of a leap forward Webb will be though. Take a look at the image below. The left side image comes from one of NASA's previous Great Observatories, the right is from Webb instrument testing. 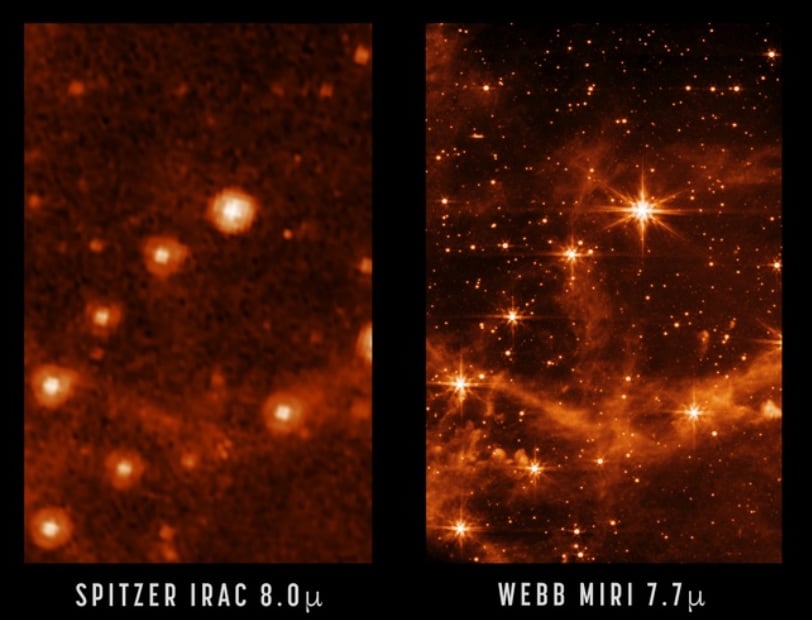 Then there’s what NASA likes to call the unexpected and unknown. “Webb also has the capacity to reveal completely unexpected aspects of our universe, as Hubble has done,” it says. “Webb’s observations, which are designed to answer specific scientific questions, forge additional questions that can be addressed in future observation cycles and by future missions and observatories, such as the Nancy Grace Roman Space Telescope.”

And if the next six months after launch has seemed to drag slowly, remember that the journey to date has taken around 25 years, around the time it takes for light to get to Earth from Vega. Six months, on the cosmic scale, is pretty much nothing.