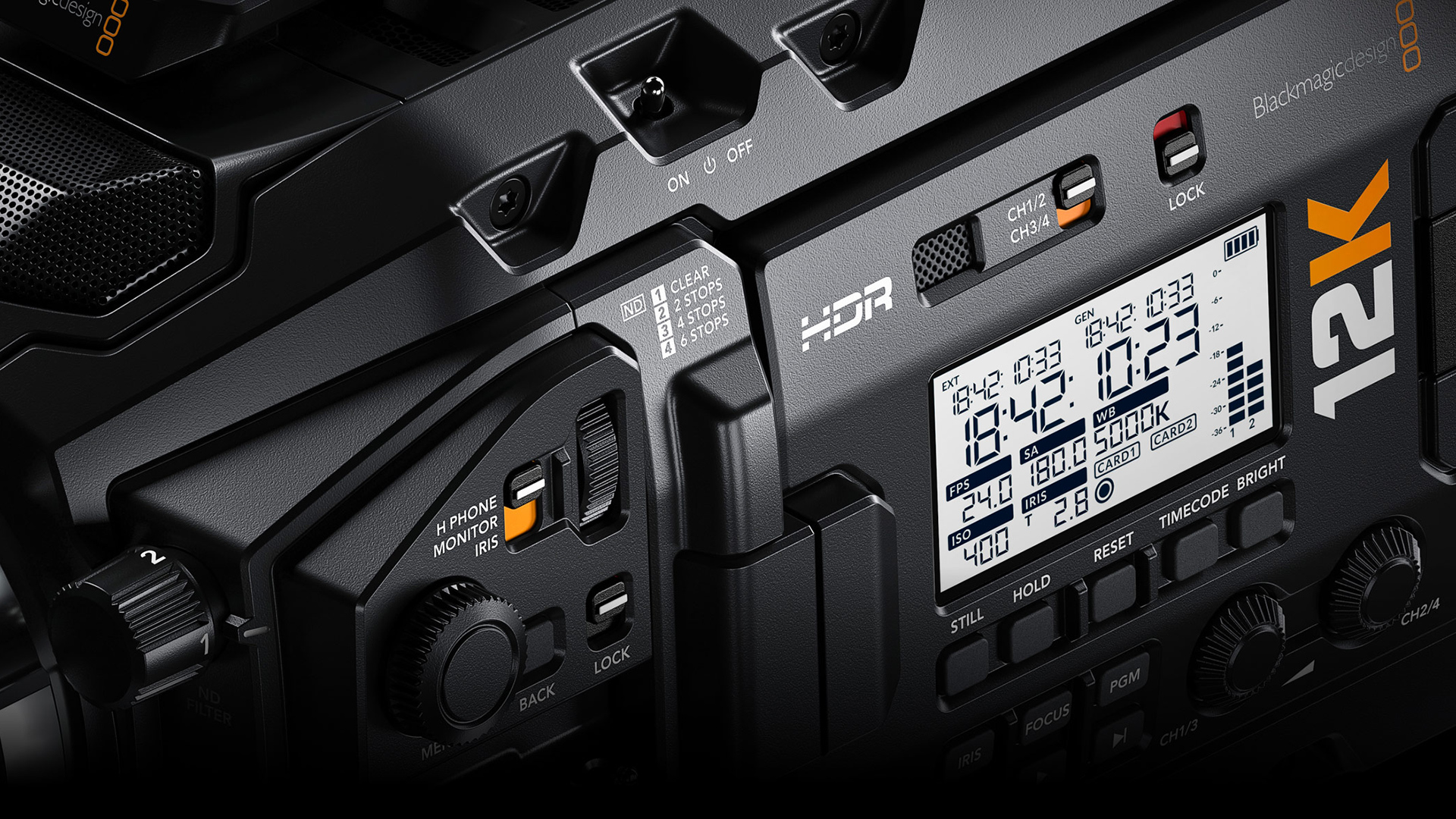 The release of the the URSA Mini Pro 12K has stirred debate. But what is the thinking behind the camera? Why 12K, and why now?

Blackmagic Design’s recent announcement was a surprise, it’s fair to say. Users might have expected a 6K or even an 8K camera, but the move right up to 12K was a completely unexpected one. It’s also an extremely misunderstood one. You see, the URSA Mini Pro 12K isn’t a 12K camera.

Okay, it is a 12K camera, but not for the reasons you think. Blackmagic Design didn’t really make the camera with the resolution it has so that you can film in 12K. You can do this perfectly easily of course if you want to, but the real reason why it exists is so that you can shoot exceptional 8K and 4K.

It was famously said that the perfect resolution for a camera is 100MP (14K). Why? Because the human eye consists of 100 million rods and cones. The 80MP of the 12K URSA Mini is well on the way towards that ideal. At resolutions as high as this pixels become pretty much irrelevant. It becomes a point at which digital, for all intents and purposes, becomes analogue.

Noise structure becomes incredibly fine, and with oversampled lower resolutions it becomes averaged out further. Subtly of detail and texture structure is picked up that you simply do not achieve with a native 4K or even 8K camera. At this sort of resolution, while aliasing technically still exists, it is visually reduced to nothing. It’s just too fine to see. High frequency edges become naturally smooth.

Even on a 4K television, and in some instances an 8K one it is possible to see the edge structure on something like sharp white text on a dark background depending on the distance you sit. At ultra high resolutions these high frequency edges are totally smooth. And as we’ve mentioned many times before on RedShark, higher resolutions are not necessarily about more detail, but much more about edge smoothness.

So primarily the 12K URSA Mini is not about actually filming 12K on a daily basis, but it is about filming extremely high quality oversampled lower resolutions.

Do you need the extra resolution? No, you can work perfectly well with your existing 4K camera. But, and it's a big but (no Shrek reference intended), we are in the business of producing the best pictures possible. And while high resolution isn't the only arbiter of picture quality, it is an indisputable fact that it is most certainly an important one.

The sensor in the 12K URSA Mini has been in development for 3-4 years now. Importantly it needs to be taken account of in light of the BRAW raw format. The two go hand in hand, and in fact BRAW was designed with the new sensor in mind. There is currently no other sensor on the market that works in this way, at this resolution, and the full technology behind it is still closely guarded by the company. This is not a Foveon sensor, nor is it similar to the ones used in the Sony F35. It's entirely new.

There is no debayer system going on here. The sensor is full RGB, so it has an equal number of red, green, blue pixels, so artefacts that would usually appear with bayer sensors are brought down to an absolute minimum. No matter what you hear about how it works, you won’t be getting the full story unless NDAs are being broken.

The sensor is S35 sized at 27.03mm x 14.25mm. Questions have been raised about this sensor size and why BMD didn’t go full frame. The majority of film production is still shot on S35 sensors, and this is where the widest selection of lenses lies, particularly in the camera’s default supplied PL format.

Although, frankly, to complain about not having full-frame is a rather childish argument to make at the best of times. A quick look through any list of films shot on S35 should make anyone who thinks that full-frame is ‘essential’ pause for thought. It isn’t, and in many cases it is downright ‘undesirable’.

Dynamic range is specified at 14-stops. Again there have been grumblings appearing regarding this. The dynamic range of any camera is subjective. It’s not something that can be truly quantified because it all depends on what you, personally, regard as usable dynamic range based on noise considerations. Indeed there are cameras rated higher at 15 or 16 stops, but then you need to ask the question of whether that is usable range. If you can’t make a 14-stop capable camera work in your cinematography, then perhaps it’s time to consider another career. 14-stops is by no means a poor figure by anyone's standard. It is much more important to see how the camera actually handles the highlights and the shadows. How well does it cope with mixed light? Are there any oddities in low light?

Apparently there is no OLPF filter on the camera. Is there a need for one at these resolutions? I'll leave that question for the tech bods. However there is the question of resolving power of lenses, as well as the issue of diffraction. I have to confess to not know enough about this side of things to comment, so I shall leave it to our esteemed technical editor Phil Rhodes to answer. We do know that lenses such as the Zeiss Supremes have been working with the camera very well indeed. And with the resolution on offer you can truly capture the individual characteristics of different lenses, including vintage ones.

Below is a test shoot by DP John Brawley, shot with Zeiss Supreme lenses and edited on a 2017 MacBook Pro in Davinci Resolve.

The RGB arrangement of the sensor and the way data is captured means that to record 4:2:2 ProRes would effectively defeat the point of the camera. You might as well use an URSA Mini Pro G2 instead in that case.

Is there a case for at least putting ProRes 4444 formats onto it? Perhaps, but then there’s still no 12K ProRes variant, and if you are going to do that you might as well record BRAW to begin with. It would mean FCP X compatibility, but as I say, it’s a moot point because ProRes cannot do 12K anyway. It could work with lower resolutions, but it would be a bit of an outlier codec on the camera if that were the case, and then you might as well, you've guessed it, use another URSA model.

Can it take on ARRI?

The specifications on the URSA 12K are pretty astounding. The slow motion capabilities alone will be an attractive proposition for some. But the bigger question is whether the camera can take on ARRI in the production sphere? This is, as you can imagine, a very tall ask, and it has as much to do with production politics as it does with the capabilities of the camera.

If camera capability was the sole decider of whether it is used as the predominant device in feature and TV production, then the ALEXA would have been superseded a long time ago. That said, the URSA has and is being used on major features. DP John Brawley for example recently used one alongside an ALEXA on the production of The Great. We have an exclusive interview about that coming up soon on RedShark. It not only matched the ALEXA very well, but it did so to the point where nobody could really tell the difference.

The URSA design is certainly robust enough from a durability perspective to be used day-in-day-out on feature production. But ARRI is very well entrenched. Go to any rental house worth its salt and you will have no trouble finding support for the ALEXA and other ARRI equipment and infrastructure. Ultimately it will be a question of demand for the camera and whether rental houses are willing to support it in big quantities. 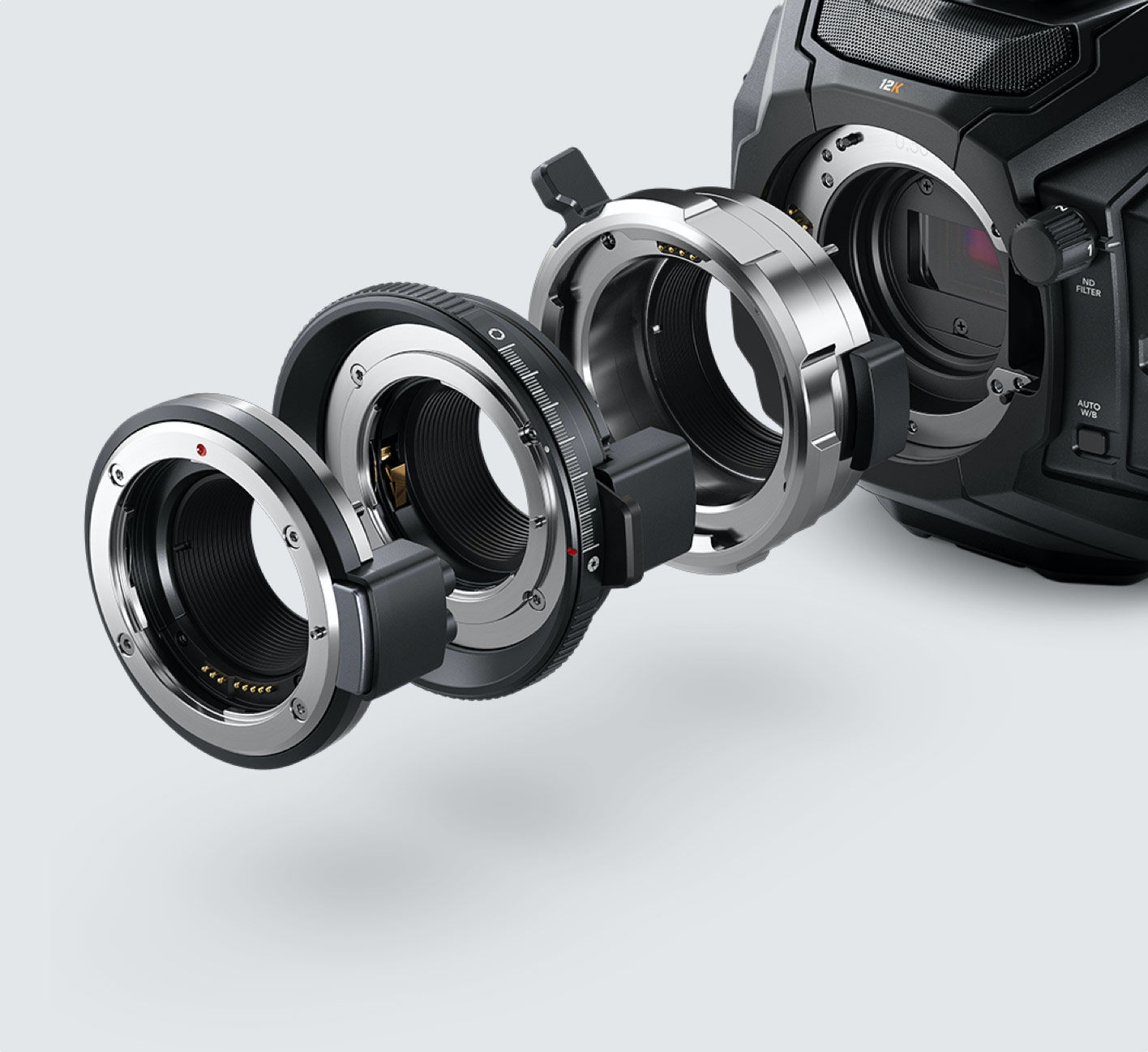 The URSA Mini Pro 12K comes with a PL mount as standard, but can be adapted to other types quickly and easily. Image: Blackmagic Design.

The difference in cost between an ALEXA and URSA won’t make much difference to big feature or TV production - although if those companies looked at the price difference over a few years of rental they might change their minds. Waste not, want not so they say. So it is going to be for BMD to be able to find a way to sell it, and that will need some very compelling reasons put forward. It is also a question of how BRAW can take on the now extremely well established and entrenched ARRI raw workflow.

These are all questions that will be answered in due course. My guess is that the URSA Mini Pro 12K will be used in ways and by people that Blackmagic Design didn’t have in mind initially. When I saw the cropping ability demonstrated, as well as the footage working on a laptop, my first thought was that this will make an absolutely stunning wildlife camera.

The S35 sensor makes it perfect for wildlife on long lenses, and the S16 crop at 220fps oversampled 4K makes it capable in ways that no other camera of this affordability currently can. Even the Varicam Pure maxes out at 120fps in 4K. So I have a feeling that for high end wildlife filming the 12K URSA may well find a very comfortable home. Particularly given that the the likes of the BBC’s wildlife unit will tend to use whichever kit gets the best results rather than being attached to any particular piece of gear.

We’ll have more thoughts and opinion on the URSA Mini 12K from our writers in the coming days. This is a camera for which the full implications may not become apparent for some time. The technology contained within it is very highly likely to make its way into Blackmagic’s other cameras in the future.

When the company released the first URSA Mini and then the URSA Mini Pro, it was a step change in the maturity of BMD's camera design. It changed overnight from a company that made capable, but quirky cameras into one that made cameras you could use day-to-day without concession. The move to the Mini Pro G2 was another major step, albeit a more subtle one.

What we’re looking at today is another major step for the company not only in terms of maturing camera design, but for camera design across the industry. This not only gives its cameras much higher capabilities than before, but it’s also one that might potentially consign the bayer style single sensor design to the dustbin. While the 12K resolution figure is getting all the headlines, the real story is about the technology behind how it all works. And that, I’m afraid, is still currently highly secret.