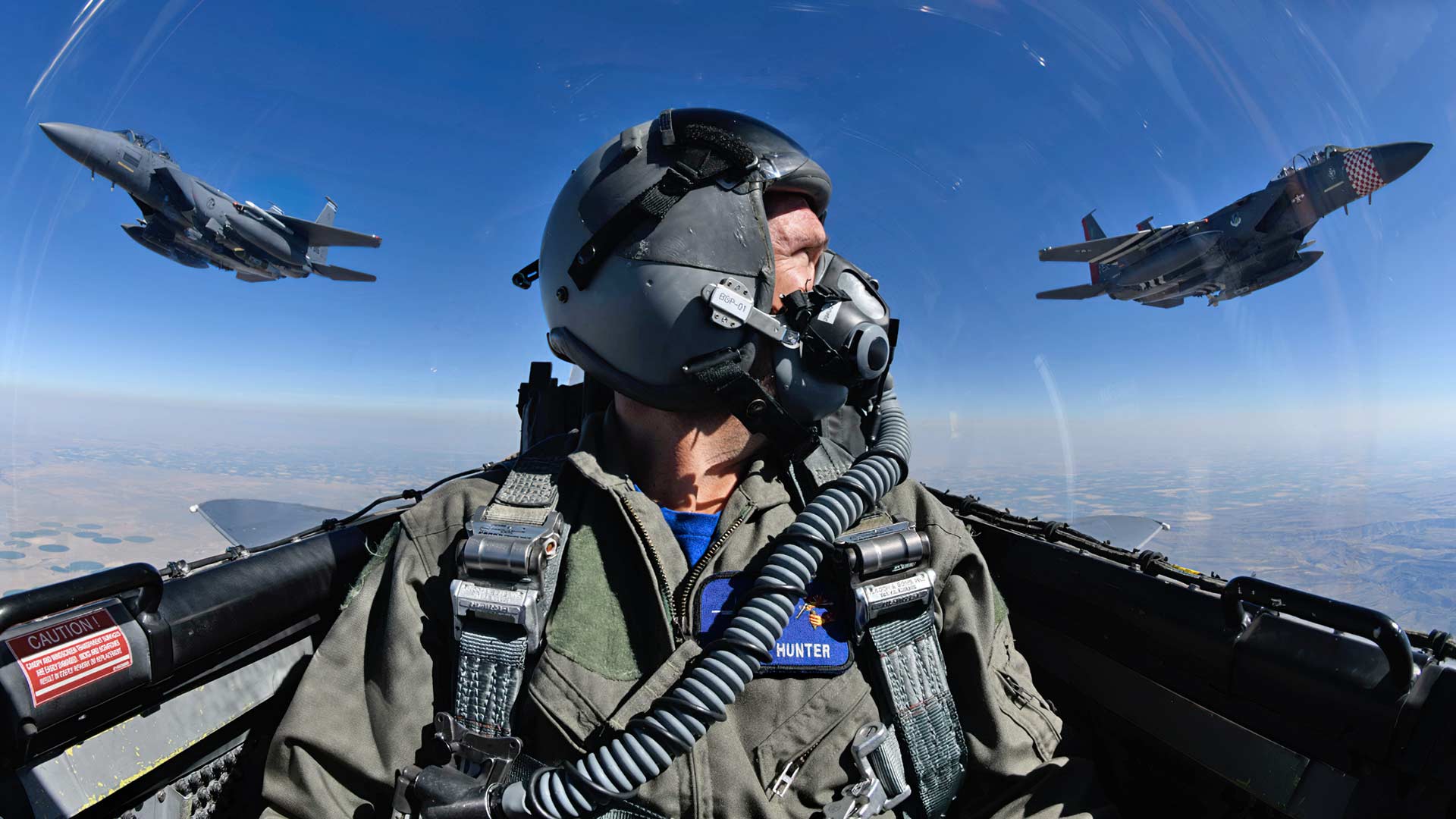 4 minute read
The small size makes the BMPCC 6K perfect for use inside a fighter jet. Image: Jamie Hunter

With a certain big movie sequel approaching release, here's an alternative way to capture the action inside a fighter jet, with the Blackmagic Design Pocket Cinema Camera (BMPCC) 6K Pro.

I’ve been photographing and filming aircraft in the air for over 20 years, and I’ve run my own aerospace and defence media agency since 2001 specialising in content generation for these demanding industries.

Airborne filming — typically shooting handheld from one aircraft to another— is something that can only really be perfected through experience. There are so many factors that combine in order to create the perfect results, but having the appropriate kit is fundamentally important to achieving great results.

When I’m walking out to an aircraft that is acting as my cameraship for an airborne shoot, a whole host of elements are running through my mind. In fact, the hard work is already complete. Everything must be carefully planned in advance so that when the moment arrives, I have exactly the right environment, tools and circumstances to make everything come together just as the client envisions.

Filming aircraft in the air tends to be surrounded by months of hard preparation. In this line of work lots of associated costs and safety implications are in play, and there’s no place for not delivering results in a safe and efficient manner. What’s in my kit bag as I make that walk to the aircraft is critical to the success of the mission, whether that is filming an airliner up at 30,000 feet, or a fighter jet at low level.

Jamie in the cockpit of an F-15. Image: Jamie Hunter.

In my line of work, I’m fairly unique in that I shoot both stills and video, and in many aircraft cockpits space is at a premium, so I have to be able to carry a compact kit bag with all the right tools for the job.

For stills shots I’ve used Nikon Digital SLRs since 2007, and until recently I complemented these with a compact 4K HD camera for the video work. However, with the constant advance in technology and increasing requirements from customers drove me to look at other options for video recording in the air. In fact, it was an assignment for a new movie that spurred me to evaluate new technology on the market.

My existing 4K HD camera has excellent image quality, autofocus and image stabilisation. These elements are useful in the air because it tends to be very dynamic, and I need to rely on the kit to help me get a shot, that could be a fleeting opportunity.

I’ve experimented with a range of cameras, including Blackmagic Pocket Cinema Camera 4K and I’ve also flown with RED Epic, as well as other cameras specified by customers. My main driver was image quality, I wanted that rich cinematic feel, but without moving to a bulky set-up. This needed to remain compact and suitable for a cramped cockpit, which limits options.

Recently I used the Blackmagic Pocket Cinema Camera 6K Pro in conjunction with the Canon EF 24-105mm image stabilised lens. A comparable body size to a DSLR, built-in ND filters and   6K image quality were a big draw. While autofocus can be a real bonus in some situations in the air, it can also be a hindrance. For example, sometimes the camera can pull focus on the canopy that surrounds you.

The 6K Pro being manual focus, makes me work a little harder as I strain to get a shot at an awkward angle, but it avoids the hunting issues that can be experienced with autofocus. The fringing on the large back screen on the 6k Pro also makes manual focus much more manageable, even when wearing flying bulky kit, in a very bright environment, and with so much going on.

This is not a quiet studio where I can carefully check the focus — it’s about as dynamic an environment as you could imagine in the heat of the cockpit, in full flying kit, pulling Gs and ripping along at 500 mph.

Image stabilisation is another major factor in deciding which video camera I use for a sortie. In some instances I’ll be in a larger cameraship with scope to use a gyro stabilised gimbal mount, however in a fighter jet this is simply not possible, I am totally handheld. So while we can plan with the pilots to keep the platform nice and stable for the shot, there will be lots of times when we hit lumps and bumps in the air, or if we are pulling Gs in a turn or a climb. It’s very hard to hold a relatively heavy camera steady in this situation.

The 24-105 lens has built-in stabilisation, but it’s not as effective as the handycam system. But actually, being able to shoot wide, then crunch in on an image that has huge resolution and apply some stabilisation in After Effects makes a massive difference to the versatility. This is where the 6K Pro really addresses this issue. Moreover, with some very bright lighting at altitude and potentially lower light levels down below the clouds, the 6K Pro’s built-in NDs are a gamechanger when it comes to this type of camera. 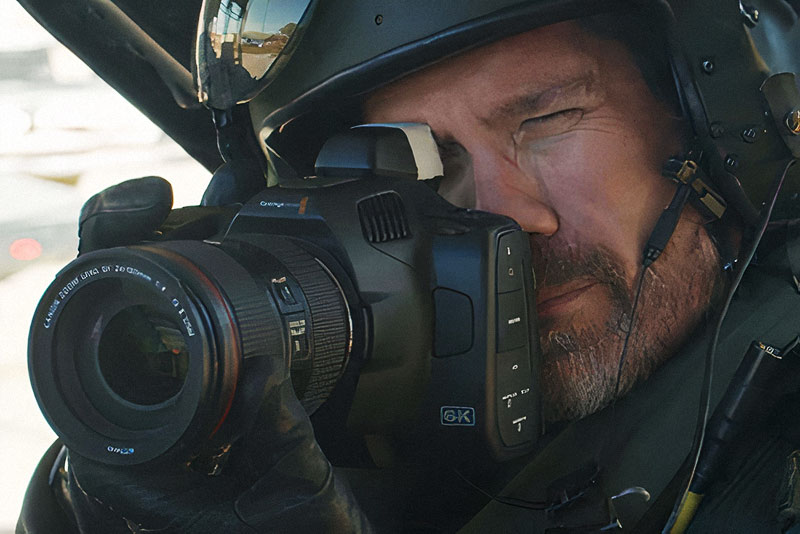 Jamie using the BMPCC 6K in the cockpit.

The first time I took the 6K Pro airborne I’d had very limited hands-on time with the camera having only just received it. Being intuitive to use is important, because I’m typically using different equipment, switching between stills and video, not to mention other mounted cameras and sometimes having to actually do things regarding the flying operations, such as communicating with the pilot, or doing safety-related things. There’s an awful lot going on.

I found the 6K Pro easy to use, even wearing a helmet and oxygen mask I was able to see the back screen easily (not so much the extra eyepiece), I was able to use the functions with gloves on, and overall, use of a fairly complex piece of equipment in this challenging environment was straightforward. In fact, we got every single one of shots we had planned to achieve.

Once into the edit, I was delighted with the rich images that had been recorded, and this dovetailed beautifully with related ground work on other similar quality cameras. Put simply, in my world, the 6K Pro performed flawlessly. We have seen a bit of shutter flickering under high G forces, but otherwise there’s little I have to say in criticism.

For truly cinematic aerial filming, the 6K Pro is now one of my go-to cameras for all the reasons I’ve set out above. These are very different considerations compared to a studio shoot, but it can definitely turn its hand to performing in what must be one of the most demanding shooting environments on the planet — whipping through the clouds and through valleys, capturing aviation in its most dynamic form.