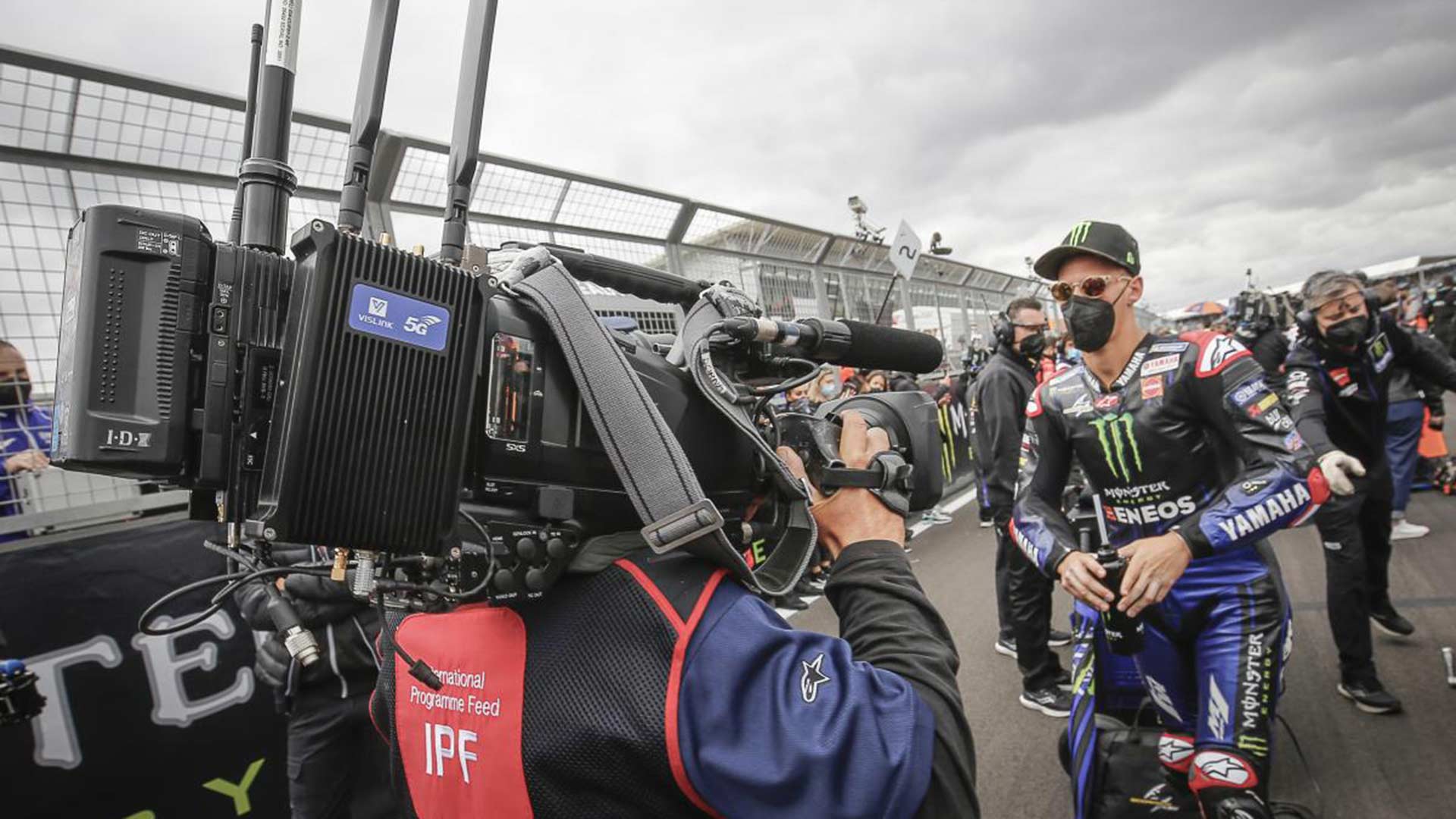 5G is being unleashed in phases but it has now reached a level of sophistication where it can be applied to production in earnest.

Elements were trialled around the edges by the Olympics host broadcaster in Tokyo and greater live deployment can be expected during the Beijing Winter Games next spring.

This past weekend’s broadcast of the British GP at Silverstone was accomplished in part using live feeds streamed from race bikes.

Live pictures were broadcast from a 5G handheld camera which was on the grid before each of the races. An onboard 5G camera also beamed back pictures from a test bike.

Standalone is distinct from non-standalone where 5G networks are supported by existing 4G infrastructures. Here, the network is 5G-enabled and 5G reliant all the way across the chain.

Vislink supplied two products for this trial. The first is a 5G version of their tried and tested H-cam handheld wireless camera transmitter, the second is a brand new 5G bike onboard transmitter that was fitted to the media bike. These were connected to a private standalone 5G network provided by the University of Strathclyde that covers the pitlane, paddock and part of the circuit. These pictures were then supplied to the Dorna production team producing the host feed which is then shared with rightsholders including BT Sport.

BT Sport also had the feed in their production gallery to cut into their event coverage.

It is still badged a trial but 5G is expected to find its way into more and more outside broadcast and news coverage. It is certainly a step up from demos such as one made by the BBC, ITV and others at IBC last year which suffered glitches – albeit over public contested mobile networks.

A 5G network can provide productions with greater flexibility than having to tether and plug in wired cameras, it reduces costs and reduces setup times.

In another example, a 360-degree spherical camera can be mounted on a drone. This could communicate with a receiver on the ground to send 8K video to a server in the cloud.

“People with AR glasses can then enjoy live video broadcast as if they were present at the venue,” suggest technology vendor Rohde & Schwarz in its white paper.

BT Sport has also been tracking this. It’s exploring how to capture volumetric video and deliver interactive immersive experiences over 5G, both within sports stadiums and to augment the live broadcast at home. Ideas include streaming a real-time virtual volumetric hologram of a boxing match onto a viewer's coffee table, simultaneously with the live feed. It is all at the proof-of-concept stage, but is part of a nearly $40 million U.K. government-funded program to develop applications that will drive 5G take up.

5G standardisation is at release 16 with further specification releases in the works.

XR services are being evaluated as part of release 17 while, longer term, a 6G spec is being scoped. A 6G wireless network will feature data rates in the terabits per second and latencies as low as tens of microseconds.

5G live production will require network slicing – the ability for a broadcaster to licence and hive off a part of the spectrum for the duration of an event.

6G could take these concepts to the extreme, Rohde Schwarz suggest, allowing customized network slices according to an individual’s needs and applications to create a truly customized quality of experience for that individual.

And while 5G could permit the introduction of holograms, 6G would likely enable high-fidelity holograms on a massive scale.