This is the most impressive use of drones we've seen 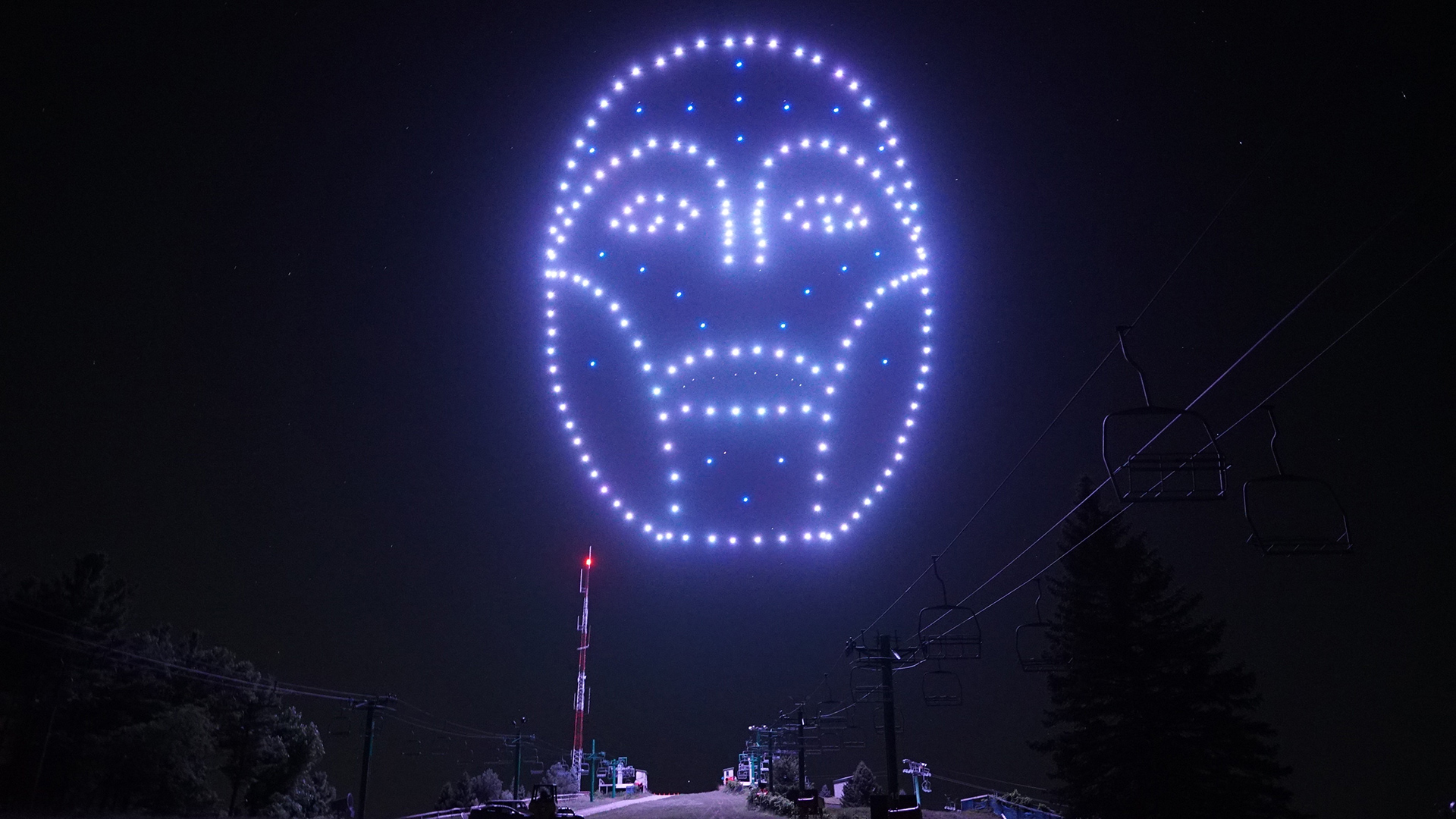 In a display of incredible coordination, this '3D' dance of drones is an incredible sight. How was it achieved?

A ghostly head sings in the sky, all courtesy of drone technology. Image: Hobbes.

Anyone who’s ever been involved in the production of a music video will know how rough it is to come up with something that doesn’t seem tired to the point of cliche, almost regardless of the budget. At some point, there’s going to be a need to depict someone singing.

But what if that person was a giant glowing face in the sky made out of points of light? Trivial in a computer, of course; the value in doing it is in doing it for real, which is exactly what was done for High in Heaven, sung by Josh Epstien and Louie Louie and created by an artist known cryptically as VWLS.

How? Same way as we’re going to be delivering mail, pizza and covid masks in a few years: drones.

Exhibitions of large computer-controlled drone swarms date back a while. In 2018, Intel ran a show  intended to mimic fireworks, albeit with the ability to hang around in mid-air for a lot longer than a pyrotechnic device. Intel’s show followed an earlier one which had retrieved the world record for sheer drone count from China; just a few weeks ago the record went back across the Pacific when Guinness World Records certified a display involving 3051 UAVs in Shenzhen.

Clearly, the numerical limit now has much more to do with people’s willingness to spend lots of money getting a lot of drones in one place at once. Doing something interesting with them requires an idea and the means to implement it. The idea in this case came from Nick Forshee at the Hobbes design studio in Detroit. It’s certainly striking, if arguably a little looming; at three hundred feet high, in person, the giant glowing face might even have felt a little intimidating, especially without the positive vibes of the accompanying music and accompanied by the whirring of eight hundred brushless DC motors. The technical implementation was by the wonderfully-named Firefly Drone Shows, based in the same city.

How it was designed and programmed

What’ll be interesting to most readers is exactly how the animation is designed and programmed. The graphic design of the face itself was intended to represent a “cosmic entity from space,” but the animation is based on recordings of the vocalists, captured with Maxon’s Moves software for the Cinema 4D environment. It’s rare for 3D software like Cinema to end up directing an actual 3D performance – usually things will be rendered down to a flat image, of course - but that’s the nature of drone shows. It’s about as close as we’ve ever got to a free space hologram, albeit with a fairly noticeable size difference between a small drone and a photon.

Some of the problem solving was provoked not by technical limitations, but, as so often with drones, by regulation. The drones involved can apparently hit 50mph in a straight line, but American aviation regulations limit them to a much more sedate 15. With motion capture data notoriously noisy and humans capable of moving very fast, it probably wouldn’t have been possible to have the drones follow real facial motion capture even without the rules getting in the way; with the restrictions in place it was certainly not allowed, even if it would have been possible. As a result, the video we’re watching is running at 500% speed, to compensate for the fact that the animation happened five times more slowly than normal. That at least explains the aircraft anti-collision light on top of the hill blinking away like a disco strobe.

The material was shot at the Pine Knob Ski Resort in Pine Knob, Michigan, in August 2020. Right now it’s new and exciting partly because of because of the techniques in use, but it seems likely that this sort of giant-scale free-space lightshow might easily become established in the repertoire of events producers. At that point, it’ll be really interesting to see what the world decides to do with it, because the possibilities are endless.