The Top 8 movie vfx sequences of all time 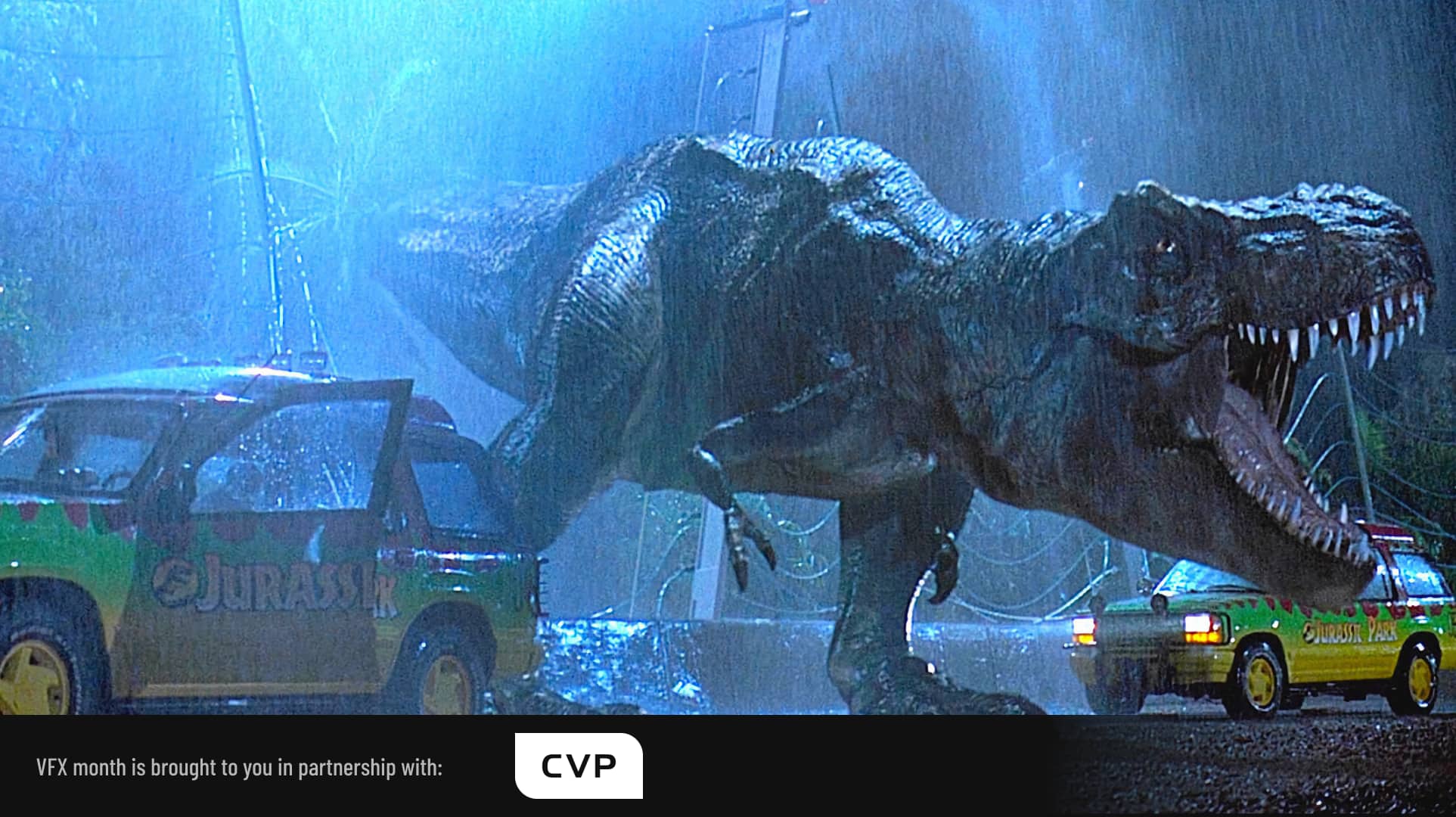 We close off vfx month with a personal list of the top 8 movie vfx sequences of all time. And, to prevent argument amongst ourselves dragging into September, we asked VFX Supervisor, Victor Perez, for his candidates.

Any list like this is, of course, totally subjective. There are a huge range of different criteria you can bring to this. Are we talking just effects that have transcended their origins to become landmarks in themselves, or ones that pioneered new techniques? Are we talking directorial composition, narrative drive, or sheer visual splendour?  You can build a list and tear it down multiple times in the space of an hour so, to ease debate (and to stop me continually going on about A Matter of Life and Death to all and sundry) we asked film director, screenwriter and visual effects artist Victor Perez for his Top 8.

He gave it some thought and came back with this. So, in no particular order…

The sequence where we first meet the tyrannosaur. It’s hard to believe this movie is coming up to three decades old and the vfx have held up remarkably well considering. And the reason for that is adroit use of both practical effects and CG. “What you see initially is a practical T-Rex that was built at a life-size scale,” says Victor. “What makes that sequence great is the way Spielberg takes you from the practical prop to the CG T-Rex so many times that the suspension of belief of the sequence is set — you just can’t follow the transition. There are 37 shots in that sequence involving the T-Rex and in only ten of them is the creature computer generated.”

Contact broke the mould for vfx in many ways. It was the first major movie to split the work between different studios, introduced a small outfit from New Zealand called Weta Digital onto the world stage, and contained several mind-boggling sequences. This one, where a young Ellie Arroway played by Jena Malone, runs frantically towards a mirror before you realise you’ve been looking at a reflection for a good few seconds, is probably the most famous.

You can read a detailed explanation of how they did it here.

“Every time I watch that sequence I still marvel how they did it so well,” says Victor. “And it integrates the sequence so well into the story and shows how vfx can be used as part of the narrative because it really heightens the suffering that the character is feeling.”

Talking of Weta… Victor’s third choice is the rather chilling scene from the middle film of the Lord of the Rings trilogy where Andy Serkis’ Gollum and Sméagol debate the merits of stealing the One Ring from the sleeping hobbits.

“This is made up of many different elements and they all work superbly together. Peter Jackson’s shot design uses different angles to showcase different sides of Gollum’s personality, Andy Serkis’ performance is fabulous, and it is also a masterclass in digital character animation.”

As you will have noticed, we return to this film a lot here at redshark. Out of a wide range of different shots, Victor chooses the iconic chase sequence where Robert Patrick’s T1000 relentlessly chases Schwarzenegger, Hamilton, and Furlong on foot while they try to make their getaway in a stolen police car.

“James Cameron is really good at these action sequences. Almost everything here is done with practical effects and everything is integrated superbly. The actual props look horribly fake in isolation, but they took them all and stitched that sequence together superbly.”

Victor decided to have his cake and well and truly eat it with two scenes from Christopher Nolan’s fabulous Interstellar; the Tesseract sequence and the Black Hole one.

“The Tesseract sequence [below] is all about trying to display time as the fourth dimension and when I saw the film I truly understood that. The vfx are excellent and they are working to explain something that is almost impossible to visualise.”

As for the black hole, the portrayal of Gargantua is remarkable in itself and perhaps even more so for the fact that consulting with physicists such as Kip Thorne to set up the sequence pre-dates a NASA visualisation produced five years later via the Event Horizon Telescope (though astronomers argue that the Doppler effect is switched off in the movie and the approaching side of the rotating accretion disk would appear brighter and hotter (blueish white), while the receding side would be dimmer and more red.)

Staying with Nolan, he and vfx supervisor Paul Franklin also famously folded Paris over on itself in Inception.

“I love the film because it makes you drama of different possibilities. But Paris folding onto itself is the stand out sequence for me. It defies logic and yet everything looks perfectly normal. They captured perfectly the nature of being in a dream and the way that things making no sense make perfect logical sense while you are experiencing them.”

Bullet time was not first shown in The Matrix, but it did make it very very famous.

“It’s all about storytelling. Bullet time was used to show how the characters can bend time and space and they used a camera movement that had not been done before. The one I really love is where Trinity is being attacked. I remember thinking Wow, what is that, how did they use millions of cameras to do that?”

It sounds simple compared to some of the big gun sequences that have been fired up in the name of the MCU in recent years, but the HUD shot from within Tony Stark’s armour that shows him navigating the suit and reacting to what’s going on in the world around him does a lot of narrative lifting.

“It’s very cool that one of the most achievable visual effects in the whole saga of Marvel is perhaps one of the ones that people remember the most.”

We could be Heroes

And that’s that. Honourable mentions at the end also have to go to two TV projects that Victor highlights. First up, the entirety of The Mandalorian and the way that it has pioneered the use of LED volumes, not to mention the sheer cussedness of choosing a main character with quite so many reflective surfaces. And the second is NBC’s four season long Heroes series that ran from 2006-2010, and especially the time freeze effects that were created for the character Hiro Nakamura.

“I loved those effects,” enthuses Victor. "The way they did it was actually quite cheap, using cables mostly with a bit of CG here and there to finesse things. But this is for me what vfx are all about. VFX are not about the budget. You can achieve amazing things when you don’t have a lot of money and I honestly prefer not to have big budgets for sequences. Not having a lot of money makes you have to think, makes you have to be smarter. As an artist I want to be stimulated and as an artist nothing is more stimulating than having a tight deadline and a small budget!”