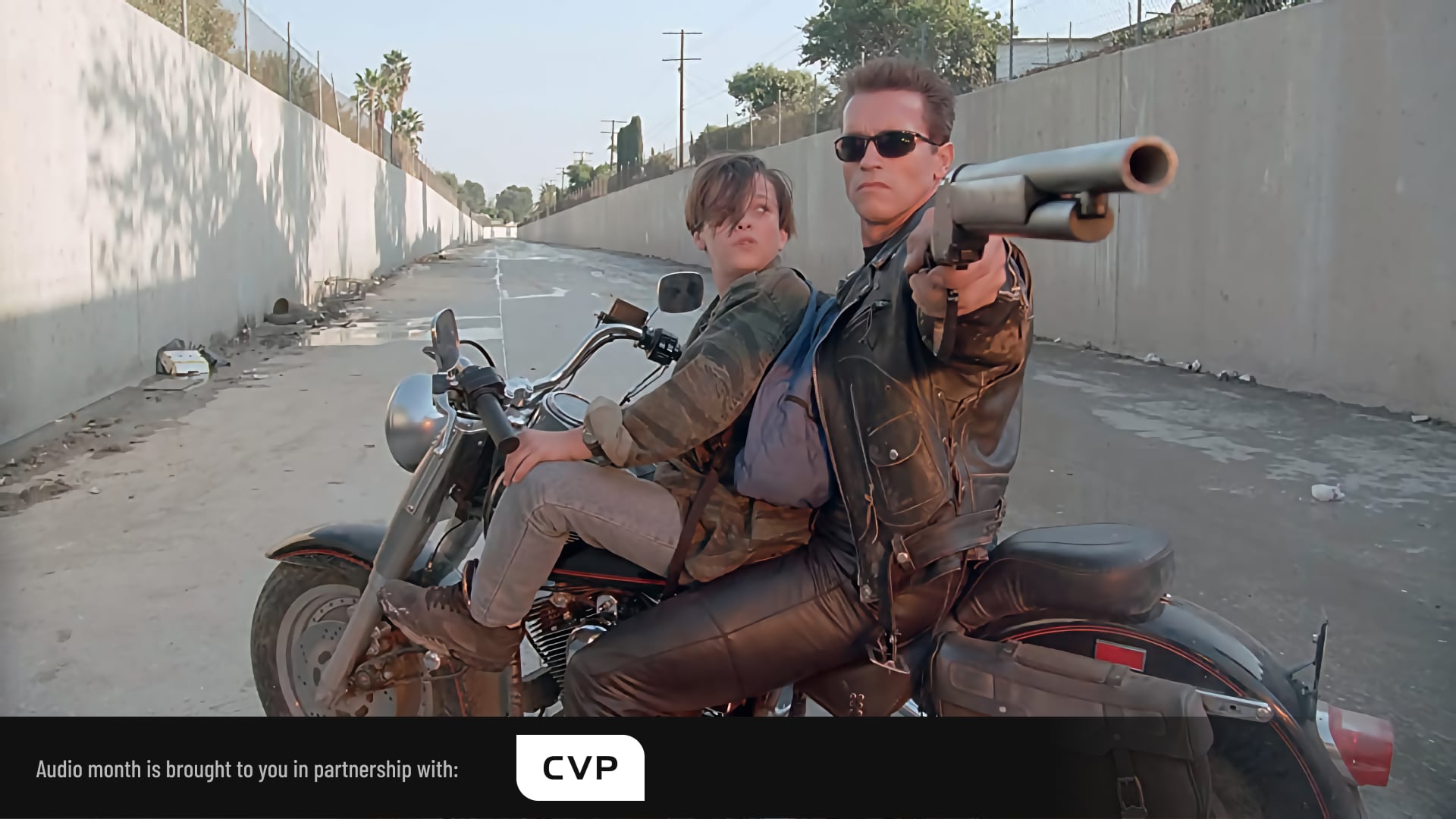 4 minute read
T2 is remembered for many excellent things and now we need to add audio to them. Pic: Tri-Star Pictures

What are the 10 best audio moments in film history? Kevin Hilton presents his list of candidates.

A leading surround audio demo film of its time, this movie's sound design remains impressive today. In the post-credits sequence, the Machines' warcraft fly across the sound picture, zapping away, leading up to a Terminator's foot crushing a human skull with a disturbingly graphic noise. Another notable shot is when Sarah Connor (Linda Hamilton) imagines the coming nuclear blast; her slowed voice and shaking of a fence disorientates the audience before the explosion races through the auditorium, laying waste to everything.

Not the first Dolby Atmos film (that was 2012's Brave) but the one that illustrated what could be done with the then new immersive format. Every sound experienced in the void by Sandra Bullock's Dr Ryan Stone is either through vibrations or voices in her headset. Working with a NASA space suit, hydrophones and a guitar submerged in water, Freemantle created muffled noises that, combined with Steven Price's music, are as powerful as the loudest crash or explosion.

There are plenty of creative and often subtle uses of surround sound throughout this film but it is best known for a spectacular, in-your-face sequence that gives all audio channels a real workout. As Dr Richard Kimble (Harrison Ford) is being taken to Death Row, other prisoners take over the bus they are all in. The vehicle hurtles into the crash barrier with a grinding noise that sets your teeth on edge and then rolls joltingly down a hill. The momentary silence is broken by a distant train horn and then completely shattered by shrieking brakes before the locomotive hits the bus. As Kimble tries to flee the derailed train, the sound of rending metal and flying debris roar out of various speakers, culminating in a huge explosion.

Rydstrom has said he changed the perspective of his sound design after speaking to veterans of Omaha Beach. Although authentic weapons were specially recorded, gunfire is less prominent than the impact of the bullets and what Rydstrom calls 'bullet bys'. As the landing craft approach the beach, explosions and gun shots are heard in the distance. When the ramps drop, it's like hell is unleashed, with shots passing the viewer from all directions. Another element is the moments of shell shock experienced by Tom Hanks' character; sounds slow and merge as he struggles to reach cover.

Ridley Scott's original Blade Runner (1982) created light- and rain-drenched future cityscapes and landscapes that had rarely been seen in science fiction films before. The heavy rain in particular creates a sense of desolation and desperation that is not quite matched in this belated sequel. The sonic atmospheres in general are effective, though, with the well-mixed street scenes conveying a sense of activity and disorder. Dolby Atmos lends itself well to these, as it does to the set piece when Officer K's (Ryan Gosling) flying car crashes into a junkyard. The overhead channels carry the rapid descent, with the impact spreading out along the side loudspeakers.

In both this and its 1986 progenitor, the jets in action are really what matter. On the original, sound editor Cece Hall mixed in sounds of lions, tigers and monkeys to beef up location recordings of Tomcat F-14 aircraft. For the new film, Nelson and effects recordist Benny Burtt went to jet engine maker GE Aviation to record not just the roar of the F/A-18 Super Hornet - as featured in the film - but many other planes to build a jet sound library. These were used as the basis of the fictional Darkstar hypersonic jet Tom Cruise flies at the beginning of the movie and also feature in various forms mixed in fully enveloping Atmos for the blood-pumping flying scenes.

The pre-credits sequence sees Mark Zuckerberg (Jesse Eisenberg) being dumped by girlfriend Erica Albright (Rooney Mara) in a Boston bar. On hearing the first mix, director David Fincher apparently yelled, "Have you ever been in a Boston college bar? This is too quiet!" The final version features layers of sound that build to create an authentic background while maintaining intelligibility on the dialogue. Zuckerberg then leaves and runs back to his room, his flip flops audibly flapping among the street atmosphere and music. Fincher also demanded that the dance music in the club scene, where Napster founder Sean Parker (Justin Timberlake) gives Zuckerberg some ruthless business advice, should be almost drowning out their conversation. Klyce heavily processed the techno tracks, bringing them up in between the dialogue to produce something realistic but also uncomfortably true.

The opening of this film sets up the whole plot, showing Harry Caul's (Gene Hackman) surveillance team using shotgun microphones and other specialised equipment to record what a young couple is saying as they wander round San Francisco's Union Square. Caul himself, wearing a concealed mic, picks up parts of their conversation when he walks past them. Even though Murch placed radio mics and transmitters all over the Square, the sound was unusable and had to be re-recorded three times. The final mix does feature some interference for dramatic purposes, masking the real meaning of the conversion until Caul finally unravels it.

Hugely influential for its visual effects, this movie also set the standard for audio in movies where the perception of reality is warped in some way. There are many examples of this throughout but the most obvious and startling are the action sequences, with thousands of bullets flying around during the shoot-outs. To isolate the bullet sounds, Davis recorded an Uzi sub-machine gun being fired at different materials, with a silencer used to pick out the penetration of the shells. He then compressed and processed the tracks so the bullets could be heard to spin and force their way through walls. The fire fights between the rebels and the Agents are ridiculously loud, particularly the sound of spent cartridges hitting the ground. Christopher Nolan's sound designer Richard King has acknowledged the influence of The Matrix on Inception (2010), notably in the cafe explosion scene.

Its various prequels and sequels may outdo it in terms of modern technology such as Dolby Atmos but the film that started it all pulled out all the audio stops despite the restrictions of an early form of surround sound. The post-titles scene in which Princess Leia's vessel is chased by the Empire fleet was a revelation at the time, with space craft passing overhead. This invention and essentially playing with a new toy continues throughout, with plenty of movement in the light sabre fights. but also provides more restrained scene-setting as in the cantina sequence. John Williams' score is also used to good effect in the different channels.