The right screen for the job 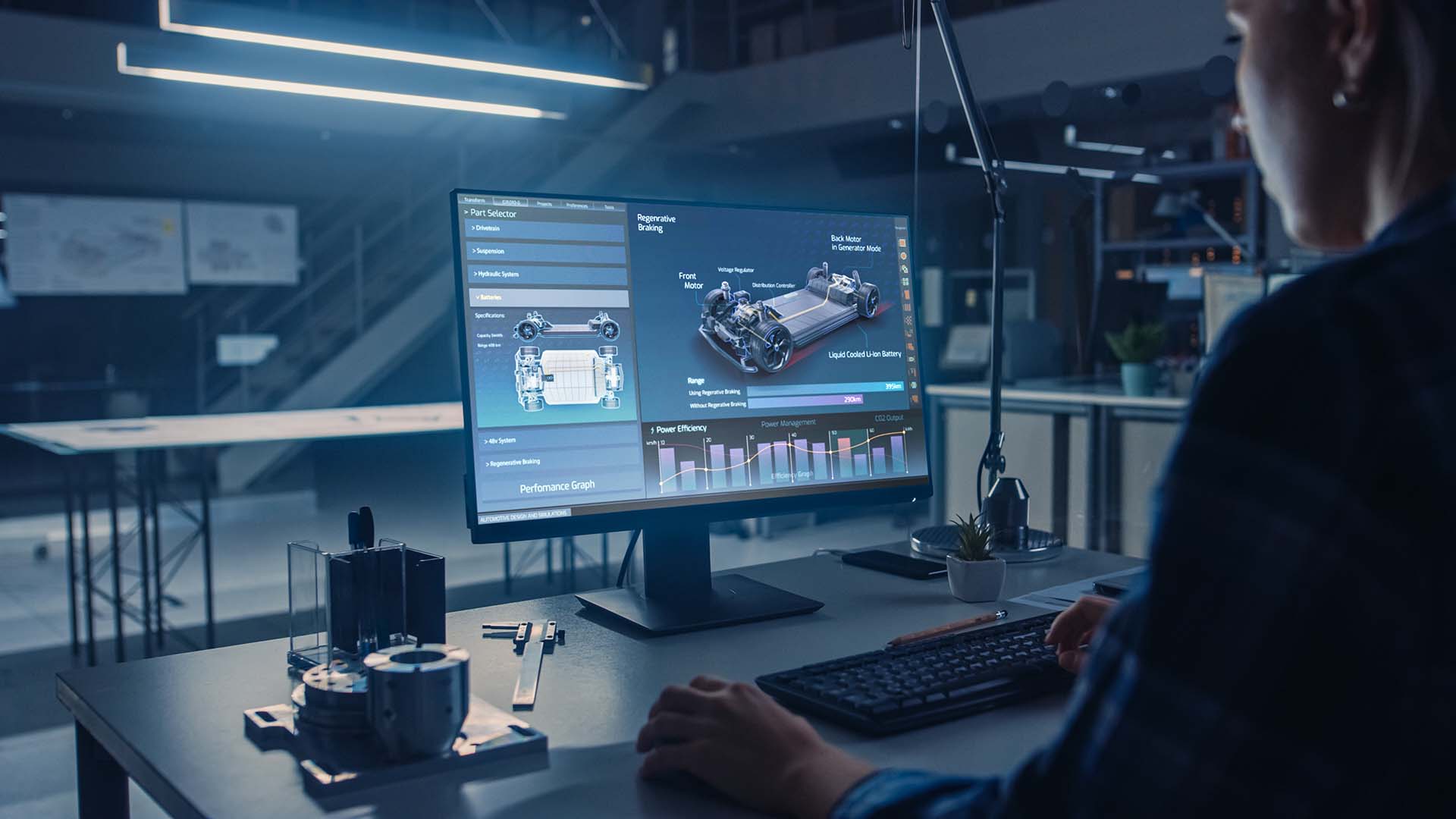 David Shapton looks at getting the right monitor setup for the work you do. In this case it was an iPad Air.

Twenty-five years ago, you could see interesting things at a trade show. Not just fascinating stuff, but curious physical objects. These days, the new stuff is almost always on a screen. I can't complain - I work for a software company - but I long for the days when people went to trade shows to see things they couldn't experience unless they physically owned them. Mixing desks, switchers, complicated-looking things that you didn't understand until you spent ten minutes talking to someone about them. Yes, there will always be physical things like loudspeakers and microphones, cameras and tripods, but I think it's fair to say that most people in the creative and media industries spend their working lives in front of a computer monitor.

So it's vital to get the right setup for whatever you do. That's not always obvious, especially when you're just one person who does many different things. I've recently found what I think is the ideal setup. It's not cheap, but it's so good that I think it's well worth the money.

I have different priorities than many people in the industry because I spend most of my time writing, but also composing music, editing audio, and sometimes video. I also take photographs. I want to accommodate all these activities without having a ridiculous amount of equipment around me. I also want my setup to be reliable. And I need it to be portable: not merely "transportable", which implies lugging a suitcase or flight case around, but portable enough to go in a bag and take as hand luggage on a train or a plane.

I'll start with the kit that's definitely not portable. I have a 32" 4K monitor. It's an ASUS PA32UCX, which has a mini-LED backlight (which dims tiny local zones to give a near-perfect black) and is capable of outstanding colour and HDR reproduction. It's got a valuable selection of colour spaces that you can switch between instantly. Away from the images, it has a plethora of connectors, including Thunderbolt. I use it when I need to judge a picture's quality or work with a complicated UI, like an NLE or DAW. I wouldn't be without it.

But I don't use it all the time, because I need to move around. But I still need at least two monitors. I discovered the solution by accident!

I love the portability of modern laptops. I'm a bit of a Mac-head, so they tend to be my first choice, although there are now some excellent PC options. So my main laptop is an M1-powered 13" MacBook Air. It's fast and extremely portable. The screen's a bit small, but I'd rather have that than something bigger that's hard to lug around. With the M1 processor, it's mostly fast enough for what I do, which doesn't include editing 8K video.

I recently discovered that I'd been using MacBooks wrong for years. I'd forgotten that you can simultaneously have several apps open in full-screen mode and swipe between them with three fingers on the trackpad. I had no idea how effective this was, but there was no going back once I'd tried it. The advantage is that you don't have to go searching through overlapping windows, and when you've found the right app, it makes full use of the available screen estate. Keep your essential apps open, and simply swipe between them. If you swipe down with three fingers, you see the desktop, with thumbnails of "open" apps at the top. You can re-order them if you want by dragging them with the mouse so that when you're swiping between the full-screen incarnations, you can get to the ones you use most.

But this isn't enough for me because I often have to refer to one document while typing into another. You can, of course, plug another conventional monitor in, but you can't take it on a train or a plane. So until now, I'd worked around that by having a second monitor in each of the three places where I commonly work, but that's hardly sustainable.

I found the answer by accident after I talked myself into buying an M1-based iPad Air. It's like an iPad Pro, but without the 120Hz refresh and micro-led screen. And then I discovered "Sidecar", Apple's tech that allows you to use an iPad as a second screen to a MacBook. All you do is plug it in with a USB-C to USB-C cable, find the "Sidebar" icon in "System Preferences", fine-tune your arrangement in "Display", and off you go. It all "just works" and has the bonus feature of charging and powering the iPad from the same USB-C cable. (It also works over Wifi - obviously without the ability to charge - entirely seamlessly. You can even pull the connector out while working, and the screen doesn't miss a beat.)

It's not the ultimate setup in absolute terms, but I can't fault it for portability. The picture on the iPad is as good as on the MacBook screen, and you can even set up a "Touch Bar" on the bottom of the screen that acts just like the physical touch bar on a MacBook.

One other benefit: I'm no ergonomics expert, but I like having screens with their base very close to the desk. Like this: 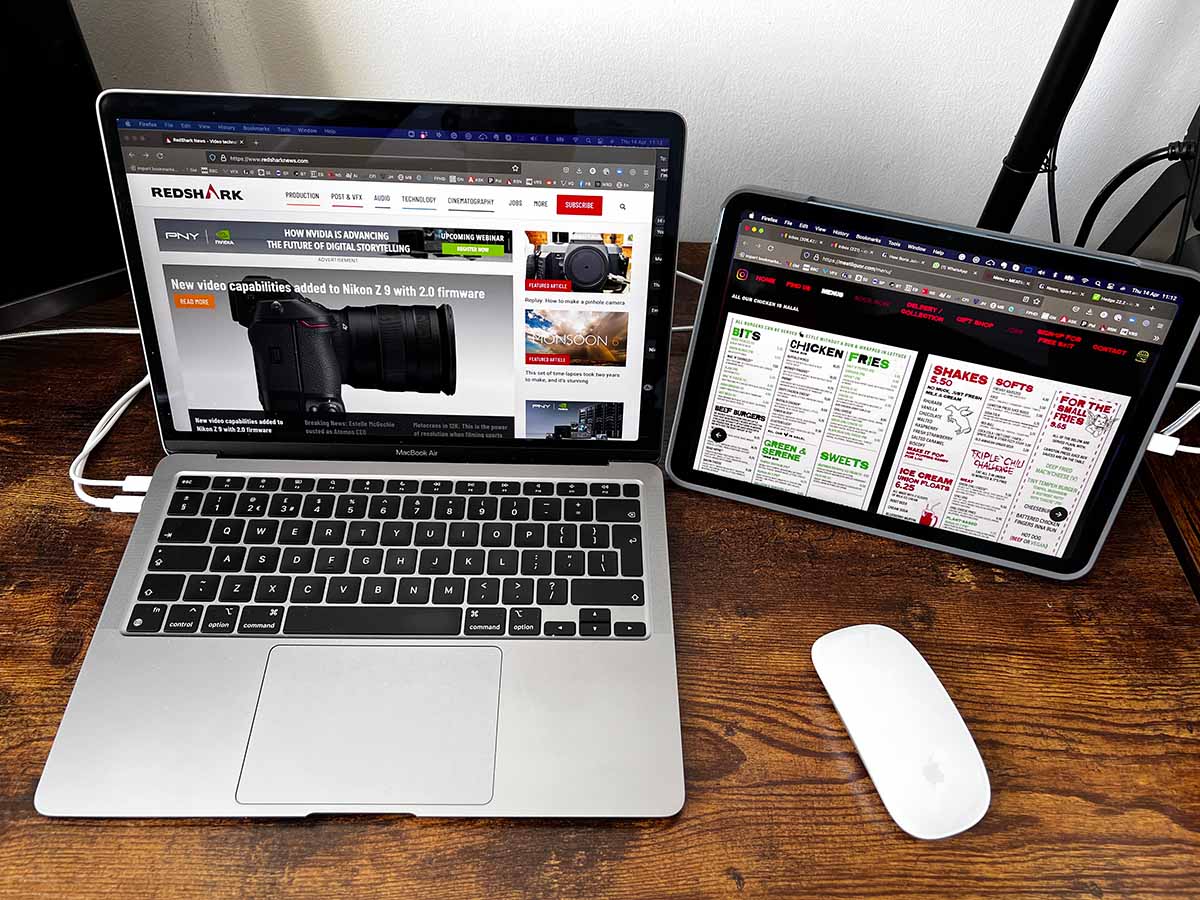 What it means is that your head is always looking down slightly. For me, it feels very natural.

Everyone has their own screen preferences. I guess my message is, don't just accept the default: there's so much choice around today (and most of it is totally plug-and-play) that it's a pity not to have a setup that's ideal for you. That might sound idealistic, but getting the right monitor set up is not exactly optional if you're spending around a third of your life in front of a computer.