Amazing new SSDs for professionals: We test the fastest, toughest and safest SSDs, ever 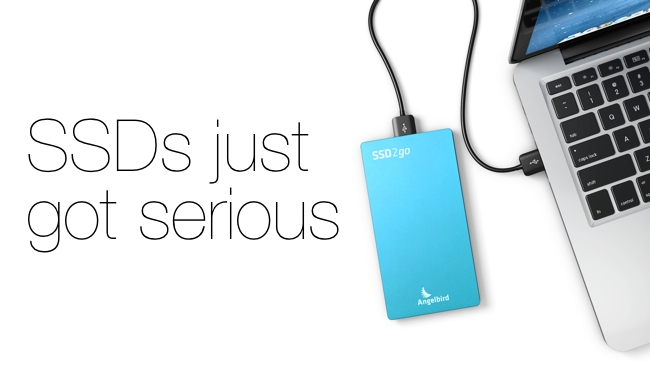 SSDs (Solid State Drives) were never meant to be treated like removable cartridges, and yet, this is exactly how film-makers are having to use them. We've come across a new type of SSD that is so solid, and so fast, that we think it may be the future for SSDs in our industry. Here's our exclusive first look

We've just about got our heads around the idea of using commodity computer hardware with our cameras and for moving our video files around. More and more cameras and recorders have ditched smaller format storage like Compact Flash and SD cards, opting instead for much larger and faster SSDs (Solid State Drives). In a way, the SSD has become the direct replacement for film. It's what you swap out of your camera when you've finished recording.

But there are some very big differences between film and SSD capturing. SSDs are re-usable, so it pays to buy good ones. You'll be using them a lot. You can tell when you look at typical SSDs that they're not designed for a mobile life. They're not meant to be inserted and removed a million times and they have little physical strength to deal with a busy, tough working career. A typical SSD is so lightweight that you wonder whether there's anything in there. Professionals don't like the feeling that they're working with something that "only just" works, and which is potentially going to cause them trouble.

Recently, we were contacted by a company called Angelbird, based in Austria. They make SSD-based devices that are designed specifically for media professionals. We're going to be testing these thoroughly over the next few weeks. Meanwhile, these are our first impressions.

We have two products to look at: the SSD2go Pro, which is a USB3 and eSATA portable SSD drive, and the AVPro, an SSD for use with cameras, recorders etc.

USB portable drives have been around for several years now and they're extremely useful for moving large files around. In fact they're a critical part of a freelancer's workflow! Until now, USB drives have relied on spinning hard disk technology, which, although it works, is slow and potentially fragile. SSD USB drives are ideal because they're robust and extremely fast. They might potentially be the fastest device connected to your computer!

SSD storage is increasingly popular with video recorders from the likes of Atomos, Blackmagic, Sound Devices, Convergent Designs and AJA. Blackmagic's Cinema Camera uses SSDs and we will expect many more cameras to use these in the near future.

The Angelbird drives are almost unbelievably well designed. They look lovely, they're made from anodised aluminium, and are very solid. And they really are tough: the external cases are made from a single block of aluminium. Overall, you get the impression that these could survive the end of the world and still look lovely.

There's a reason they're built like this. They're designed and Made in Austria, a small, central European country that's becoming increasingly known for its high-tech sector. Angelbird CEO, Roman Rabitsch told us that it was only possible to reach the highest quality levels and be able to make specialised products like these by doing everything from start-to finish in-house. Everything from the initial idea, the research and development and the manufacturing is done by Angelbird in Austria. Nothing is left to chance or a third party.

And the result is that they're made like nothing you've ever seen before. They are as far from the "Standard" way that SSDs are built as it's possible to get. There's such a feeling of solidity and quality from these drives that It's almost impossible to imagine how they could be made to feel any better.

You know what it's like when you buy an expensive camera, or a top-end lens? That's what these drives feel like. 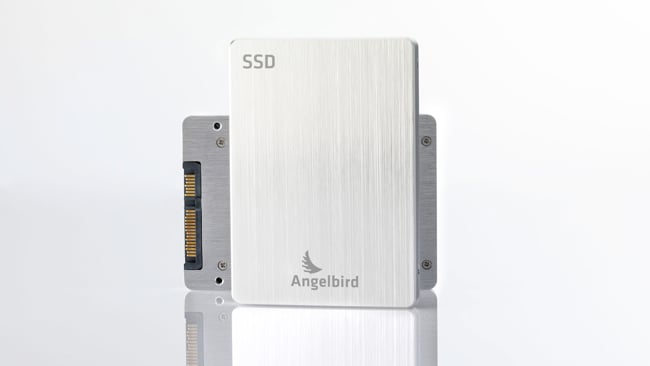 Two extra PCB layers for thermal and ground use

Every unit is hand built, tested and benched before getting shipped

No paint, glue or plastic is used; the product is built with the environment in mind and can easily be recycled

The packaging is made from 100% recycled paper and does not use any ink for printing: it is laser marked

No stickers or parts on the housing which could negatively affect the capability of hassle free use as cartridge for cameras, recorders or players

As far as performance is concerned, they're made from synchronised 3000PE/cycle grade A micron NANDs and are optimised for speed and reliability throughout. We tested the SSD2go Pro via USB3 with the Blackmagic Disk Test and here are the results. (Remember that this is a first look. We did nothing to optimise our test set-up and we went through a USB 3 hub. Under more scientific conditions, other independent testers have achieved even higher speeds than this. If we had tested the eSATA connection we would have seen even higher speeds.) 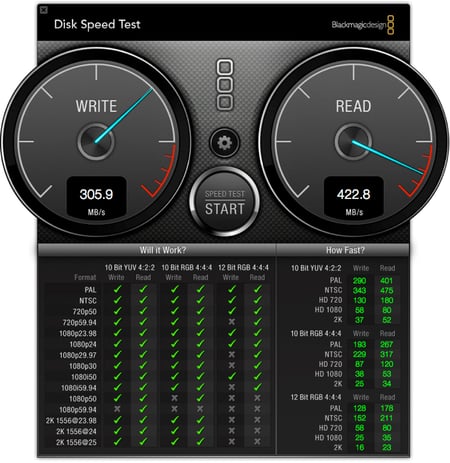 To be honest, we're blown away by these drives. The SSD2go Pro is so fast that you could easily even run a virtual machine from it. For transferring your video files, there's nothing like it. You could certainly edit directly from it.

The AVPro SSD feels like it was always intended to be used as a removable cartridge. It's as if it was designed as a new type of media cartridge that has to last for ages in tough conditions, and be very fast at the same time. It's almost analogous to XDCAM or P2 storage - both designed for rugged, professional use, except that they don't come clad in solid aluminium. When you see it, you realise how inadequate "standard" SSDs are. And with the built-in UPSs to avoid cache errors (data loss) if power is lost, your data is safer than it's ever been.

These aren't cheap, but they inspire confidence, with amazingly high speeds and a wide range of safety measures. We think they're utterly professional, and in today's production landscape, you really do need something like this.

We'll be looking at these drives in more detail soon. For more info go to Angelbird.