Exclusive: The truth about OLED monitors 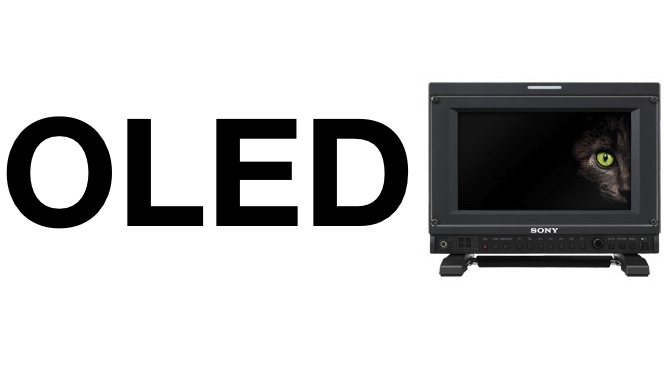 Will OLED prices ever come down? What makes them so good, anyway? Barry Young reports

OLED technology outperforms LCDs; it has a smaller and lighter form factor and is beginning to reach parity from a price perspective. In 2011, over 100m OLED displays were shipped into the smartphone, handheld game and digital camera market and in 2012 that number will double, and in addition there will be new applications such as tablets and TVs. Revenues are expected to grow from ~US$4B in 2011 to over US$8B in 2012. Another market being addressed exclusively by Sony is the cinematic monitor, which takes advantage of three OLED attributes:

Figure 1 shows a comparison of the response time differences between LCDs and OLEDs. OLEDs are about a thousand times faster than LCDs switching from on to off and this speed eliminates any ghosting or image distortion prevalent in fast moving images shown on LCDs. 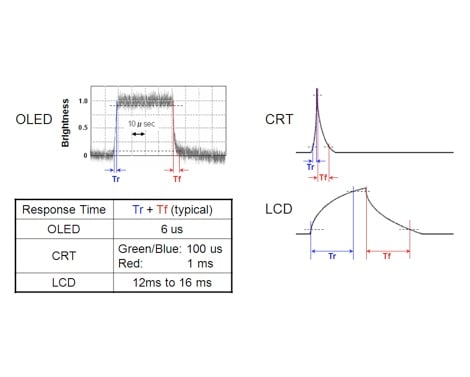 When viewing an image from frame to frame, the OLEDs have a thousand times the contrast ratio of LCDs; dipping to ten times within a frame. The impact of these differences is the inability of LCDs to differentiate between multiple dark gray levels: the dark images in the Batman films are good examples of this.

Perhaps the least understood parameter is the color gamut and the reproducibility of the low gray levels used in differentiating facial tones.  LCDs perform well at full saturation as do OLEDs. However, when the input signal is decreased to 10% of saturation, LCDs are unable to accurately produce the gray level and are limited to ~11% of what is required, while OLEDs reproduce the image almost perfectly. The reason is that the OLED gamma curve is essentially linear, meaning for every change in current there is a similar change in luminance, while the LCD gamma curve is non-linear. For the lower gray scales, the gamma curve is close to vertical resulting in large changes in luminance for small changes in voltage, while at close the saturation, the gamma curve is flat, meaning small changes in luminance for large voltage changes.

Recently, Doug Jensen, a veteran producer of training and promotional videos, who specializes in documentary and film-style video production for broadcast and cable networks conducted a side-by-side comparison of his 17” TFT LCD monitor and Sony’s OLED PVM-740 (OLED) monitor. He reported that he” loved the picture on the 740”, it “looked fantastic”.  In his studio shooting, their typical set-up is a high-key, white background. Sometimes LCD monitors can’t handle the contrast and flesh tones when the talent is against that kind of backdrop. The flesh tones don’t look that great on an LCD monitor. What the camera is picking up is a different story, but on the monitor, the flesh tones usually look a little dark.  “On the OLED, it looked great. It looked just like I expected it to look in post, and it handled that contrast of the bright and the darks so much better than other monitors I’ve used.’

The one drawback to using OLEDs for cinematic applications is their high cost, approximately 50% to 100% higher than comparable TFT LCDs.  Today, Sony is the only company making OLED monitors and this situation is not likely to change in the near future for a number of reasons:

First, Sony manufactures the monitors on a small pilot line called a 2nd generation fab that is 600x720mm and therefore can produce only one 16.5” or 20” panel per substrate. By way of comparison, Samsung uses a Gen 5.5 substrate (1300x1500mm) and produces over 400 5” panels per substrate

Second, at this time, Sony’s capital investments for OLEDs are limited to maintenance. Recently, the company partnered with Panasonic in their 6th Gen line. The existing pilot line will continue operating as long as it contributes to the their bottom line.  It is not being used to facilitate the future TV business.

Other companies -  Samsung, LG Display, and AUO - are turning their attention to the 200M/annum TV market and are unlikely to have much interest in the 50K per annum cinematic monitor market.

The monitors are expensive to produce and are built with individual care.  For example,
OLED TVs either use patterned red, green and blue sub-pixels or red, green or blue layers with a color filter.  Sony uses both a patterned sub-pixel and a color filter as shown in Figure 3

The monitors have cutting edge processors for quality consistency, uniformity and long-term-reliability not required for standard monitors. They also offer 10 or 12 bit drivers compared with the standard 8 bits for TVs.